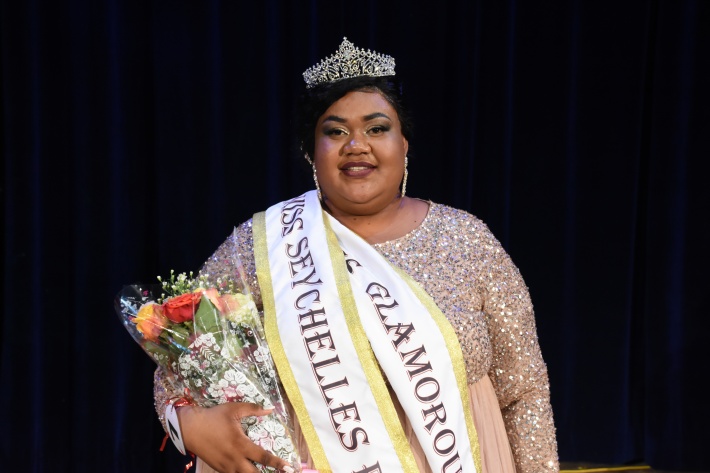 28-year-old Christy Bradburn was crowned Miss Seychelles Plus 2019 during the the plus-sized beauty pageant on Monday evening.

The beauty pageant, now in its second year and organised by Beauty Organisation Seychelles, was held at the International Conference Centre of Seychelles (ICCS), garnering a large and animated audience.

Present at the ceremony were various female ministers in the government and female members of the National Assembly as well as a number of other pageant queens.

Christy, who caught the crowd’s attention with her eloquent answers to the judges’ questions, was crowned by the outgoing Miss Seychelles Plus 2018, Angie Jeannie.

The crowned Miss Seychelles Plus 2019, Ms Bradburn, was also crowned Miss Glamorous and her first princess, Ms Orphée, was voted as Miss Congeniality by the other contestants.

Other awardees of the night were Julia Laporte, who pulled a hat-trick by winning prizes for People’s Choice, Miss Photogenic and Miss Sports, and Lynn Barbe who clinched the prize for Best Pageant Spirit.

The contestants were judged on their beach-wear, casual-wear and evening-wear as well as on their responses to the question and answer segments of the pageant.

The judges also assessed the contestants throughout their various activities and projects during the months leading up to the crowning night.

Speaking to the media after the crowning, an excited and overwhelmed Ms Bradburn shared her sentiments on her achievement.

“Although I have some mixed feelings, because all of the other contestants are as special as I am, I’m very happy and proud of my achievement,” she relayed.

“I had assumed that I will do well in the pageant because I like to aim high but I cannot say that I expected to win. Each of the contestants had pulled in as much effort as I had.”

“I definitely want to implement my project which is based on empowering women and girls. I want to create healing groups – places where women can join together so that they can gain a listening ear. Radio shows which can reach and impact on Seychellois women everywhere are also in the plans,” she stated.

When asked why she opted to participate in this year’s pageant, Ms Bradburn explained that the pageant acts as a platform for plus-sized women, such as her, to not only be seen but also be heard.

“Plus-sized women now have a place they can call home, to portray who they are and what they want to achieve,” she added.

The pageant saw a number of performances including a beautiful dance by students from the school for the deaf and the Heart Beat studio as well as musical renditions from well-known artist Joe Samy.

The night concluded with the contestant’s interpretation of Alessia Cara’s ‘Scars To Your Beautiful’.

Kevin Perrine, the public relations manager of Beauty Organisation Seychelles, noted that although some of the fifteen women who registered opted to drop out, the second pageant was a success.

He further remarked that while the pageant remained the same, this year’s contestants faced a more vigorous preparation process than those in 2018.

Mr Perrine expressed that other plus-sized women who want to participate in next year’s Miss Seychelles Plus should not hesitate to join. 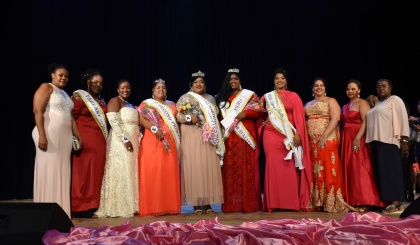 Ms Bradburn, her two princesses and other title winners in a souvenir photograph with some female guests