How far would you go to save your unborn daughter’s life? They chose quarantine in Paradise... The Seychelles | 03 April 2020 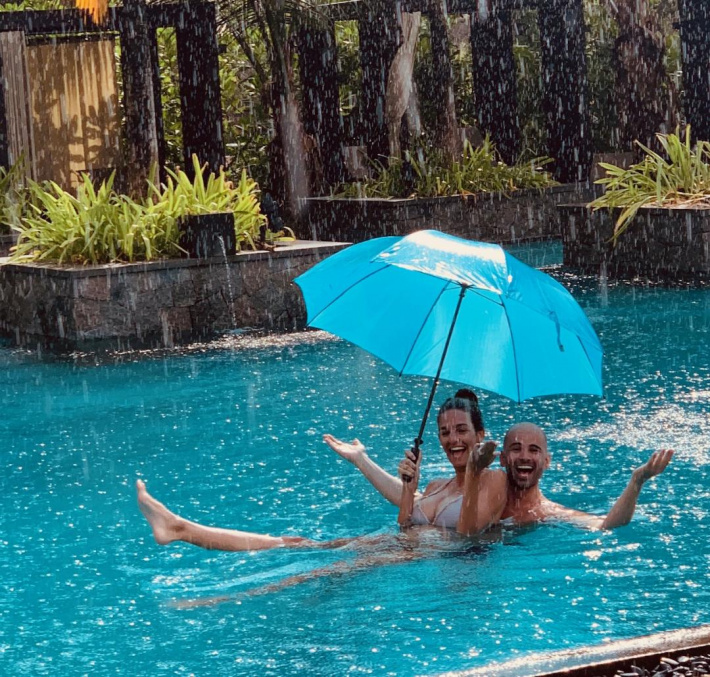 While some foreigners opt to leave Seychelles to go home amid the coronavirus (COVID-19) pandemic, some purposely come to our country to isolate themselves from the virus.

Cypriots Karl Haddad and his pregnant wife, Valentina El-Sayed, purposely left their home in Dubai to isolate themselves from the virus in our country; deemed to them as a safe haven, among other places, against the virus.

Speaking to Seychelles NATION at the Hilton Seychelles Northolme Resort and Spa in Glacis on Wednesday evening, Mr Haddad said, “we wanted to save our unborn daughter’s life so we chose to quarantine in paradise….the Seychelles”.

He said that after his wife’s miscarriage, he was not willing to risk losing a child again. Miscarriages are one of the saddest untold stories of life. He noted that though it was a calculated risk, Seychelles was one of four listed island countries that they had identified had a high likelihood to contain COVID-19.

Mr Haddad said that they had wanted to come to a small island within distance of their working base, hence easy to manage their business remotely.

He also said that apart from its beauty, our country being a short direct flight without connections, being one of the richest in Africa, and with an advanced medical system, constitutes among the many reasons for them to come here for self isolation against the virus.

It’s been over two weeks since the Cypriot couple, who live and work in Dubai, have been residing in Seychelles since they had managed to catch the last Emirates flight to the country. They have chosen to stay in the country until the birth of their child, due in August.

“We boarded a 300-seater Boeing with seven people onboard. It felt like a private jet. I’ve been on close to 700 flights, and never had I seen anything like this,” he said. “On our first day at the beach we saw approximately 300 people. By the next day all the tourists were scrambling out and in a matter of 24 hours, Beau Vallon also became a private beach. Incredible how nature recovers… perhaps simply reclaiming her place.

“We saw a school of dolphins playfully and witfully cornering a shoal of fish just 50 metres from the shores of Beau Vallon. Even the Seychellois lifeguard was in shock. In his 25-year lifetime he had never seen this, and so close to shore,” Mr Haddad continued.

Later that afternoon while snorkelling the reef, he had a Nat Geo moment. Over two dozen young bull sharks and hammerheads were swimming right next to him. No swimmers oozing their toxic suntan oil. No noisy jet skis and boats disturbing marine life. In just two days, paradise reclaimed… paradise. He suddenly remembered a dark thought that kept bouncing around in his head….

“The only thing that separates humanity from cancer is that cancer doesn’t realise it is killing off its host. We do”.

“Is humanity a virus and is the earth the celestial body? Is this body, whether with the help of men or its own instruments, releasing its own antibodies? Its own chemotherapy. Unsure of the outcome. One thing is for sure. It’s not the end of the world. Just the end of the world as we know it. Coronavirus is a wake-up call. Not a nice one by any measure but perhaps the only way for the world of men to recognise its perceived omnipotent power is indeed so fragile,” Mr Haddad reflected.

Mr Haddad said that coming here is also a personal milestone. “Seychelles is the 80th country I’ve visited and from all the countries that I’ve been to, I have to admit it’s the first country that I can truly call Eden. Seychelles is also a country that I had always said to myself that I will come to only when I find my life partner,” he added.

He also said that by coincidence his nanny is a Seychellois and that also added more wind in the sails pushing them towards our island.

“I know she is old and still alive. I don’t know if she remembers me but I will surprise her when the COVID-19 situation dies down in the country because I want to kiss and hug her. I cannot imagine a simple hello and keeping my distance. I want to pick her off her feet and swing her in the air,” Mr Haddad said.

The Cypriot couple live in the world’s tallest tower, Burj Khalifa Dubai, and he said that though they would have been safe in their fortress, in the case of a COVID-19 disaster, they would be practically locked inside as the apartment has no balconies.

Mr Haddad, who has been living in Dubai for the past fifteen years, is the chairman of IRC Invest (Immigration Residency Citizenship), market leader in 2nd citizenship by investment. He is also an advisor to three governments and over a dozen Forbes listed individuals. He is also a very active CSR global champion for humanitarian work and he has been part of numerous boards including the UN initiative to end slavery.

“10 corona cases in the Seychelles and surely a few more to come but my gut feeling also says it may be the first country to fend off the virus and become corona free... if the government doesn’t get complacent about its success to date,” Mr Haddad said.

He feels that the media is underestimating the strength of the virus while in reality, he believes that millions of people will unfortunately not make it, and at least one third of the global GDP will be wiped out; hotels, restaurants and airlines being the biggest losers. 2020 truly is the black swan year we had planned for but hoped would not come to pass.

In Seychelles, apart from staying at the hotel premises, the couple travel to beaches among other places visited on Mahé. The couple got married here and are very touched by the warm greeting and genuine kindness of the Seychellois people. Mr Haddad stated that they are making necessary arrangements to provide the Ministry of Health with protection face masks against COVID-19.

“Seychelles, you can be the first turnaround story in the history of this disaster to announce, ‘We are Covid Free’, and we hope to proudly call our child Seychellois in August,” Mr Haddad said, noting that the government should find ways to facilitate the immigration/residency requirements for foreigners who are either stranded here or have chosen to stay longer, in this time of crisis. 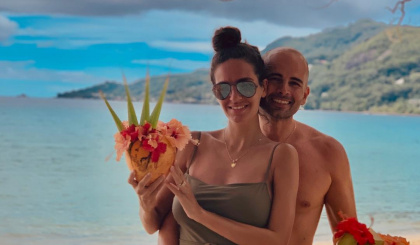 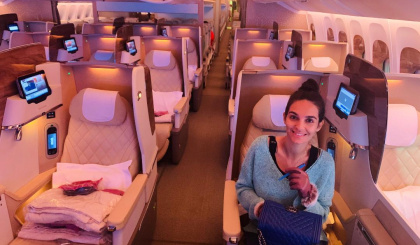 The couple travelled on an almost empty plane to Seychelles