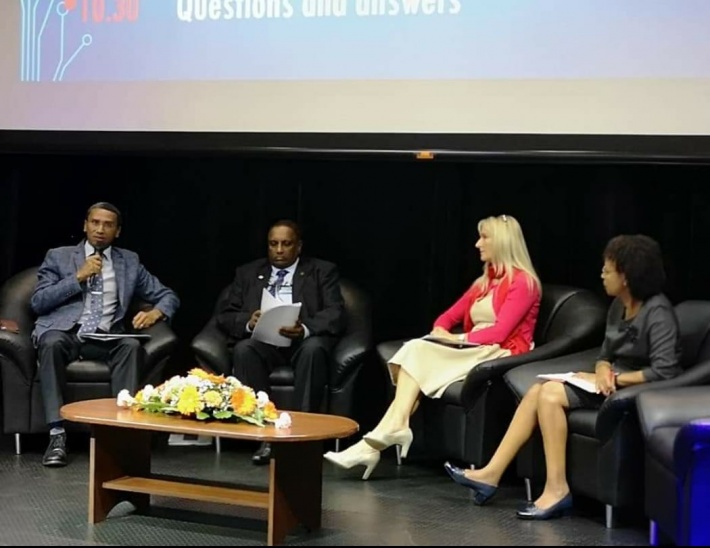 Ambassador Faure speaking during the round table discussion

Secretary of state Ambassador Barry Faure took part in a round table discussion on maritime security, held on Friday under the theme ‘A Safer Ocean’ in the margins of the second Ministerial Maritime Security organised in Mauritius.

The round table was held at the University of Mauritius in Ebene and organised by the Indian Ocean Commission.

Ambassador Faure stated the importance of the ocean to all countries especially for Sids (small island developing states) since “it is in our common interest to preserve and protect the ocean”.

He stressed the point that “there should be no rivalries between States in the Indian Ocean, just peace, as our region should remain a zone of peace and opportunity in line with the UN declaration of 11/12/1971”.

His intervention sent a strong appeal to the audience that comprised mainly high level officials from Mauritius and professionals, academia and students.

He said that “Seychelles will continue to advocate for stability and safety in our ocean especially as the champion of the development of the Blue Economy in Africa”.

The round table was officially opened by the Mauritian Minister for Foreign Affairs, Regional Integration and International Trade, Nandcoomar Bodha.

Also present in the round table discussion, facilitated by the head of governance of peace and security for Comesa, Elizabeth Mutunga, was the EU ambassador Marjana Sall, who acknowledged Seychelles for continuing to be at the forefront against piracy and who commended our recent acceptance to prosecute the 5 suspected pirates apprehended by the Spanish vessel Navarra last April.

Present as well was Mr Dabidin from the Mauritian Prime Minister's Office, who spoke thoroughly on various measures and challenges faced by his government in tackling maritime threats.