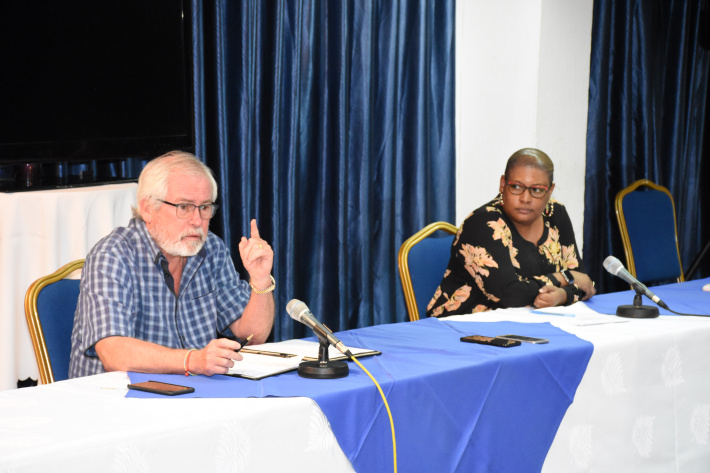 Following the publication of the Fitch rating report in which Seychelles has dropped two levels, from a BB rating with stable outlook to B+ with a stable outlook, Minister for Finance, Trade, Investment and Economic Planning Maurice Loustau-Lalanne yesterday said that even much worse was expected, on account of the economic implications of the COVID-19 pandemic on the domestic economy.

Highlighting the country’s progress over the years in terms of ratings, Minister Loustau-Lalanne noted that Seychelles received its lowest Fitch rating in 2008 when it was placed within the CCC with a negative outlook bracket. Over the years, Seychelles has gradually climbed up the ratings, in 2019 secured its highest rating, and the country was twice rated as BB with a stable outlook in Fitch’s assessments.

According to Fitch’s definition, a rating of B+ with a stable outlook is a ‘highly speculative rating’, which means that Seychelles is seen as at risk of defaulting on its loan payments but it also indicates that Seychelles has sufficient resources and capital to pay its financial commitments. The report also goes further in stating that in case the country’s economic and business situation deteriorates, Seychelles will become more vulnerable.

During the press conference alongside Governor of the Central Bank Caroline Abel, Minister Loustau-Lalanne noted three main contributing factors towards the rating, confidently stating that it was expected “because of the ‘new reality’ we are now faced with”.

He also highlighted that Fitch has undertaken numerous sovereign ratings for other countries whose ratings have also declined, including United Kingdom, who lost its AAA rating and is now AA- with a negative outlook, as well as Sri Lanka, South Africa, Maldives and even Mauritius who have all been downgraded.

“The report highlights three factors that have brought us to this new rating. Firstly, the budget that I brought to the National Assembly on April 7; what we predicted for this year on the economic front and our present reality is strikingly different. In the 2020 budget we had predicted a 3.5 percent gross domestic product (GDP) growth but, according to our calculations, our new reality might result into a contraction – a budget deficit of 10.8 percent. On the other hand, Fitch is anticipating the Seychelles’ economy to contract by 14.6 percent,” said Minister Loustau-Lalanne.

“Secondly, we have also forecasted a fiscal deficit of 14 percent which means that we will not meet the 2.5 percent primary balance objective we had set for 2020. We had set the deficit at R3.7 billion while Fitch forecasts negative 15 percent in deficit. Thirdly, due to the pandemic situation we had estimated that our debt to GDP ratio will increase to 85.1 percent while Fitch’s report states that the country’s debt to GDP ratio will reach 79.2 percent; because it does not take into account monetary debt when it calculates sovereign ratings,” Minister Loustau-Lalanne explained.

With regards to the outlook for the future, both Minister Loustau-Lalanne and Governor Abel made reference to the uncertainties brought about by the pandemic and which is looming over the entire globe presently.

Ms Abel asserted the need to hold onto and boost the country’s reserves, so as not to be further downgraded in future ratings.

“In regards to external resilience, our foreign exchange reserve expects to decrease if the current situation does not improve. Fitch has calculated that our reserve will decline from the amount we had in 2019 to US $388 million. This shows that we will become more vulnerable because we will be losing the money we have saved in our reserve at a rapid pace. The concern is the country’s ability to sustain this blow; we are working on measures to ensure that the reserve is not depleted in a short amount of time because the reserve is an important resource in sustaining us. This factor has also played a part in the new rating…

“If we continue to lose our reserve, our future rating might be further downgraded and instead of positive outlook it might become a negative outlook,” Governor Abel stated.

Despite the rating, Minister Loustau-Lalanne assured that the government is in good standing to maintain its financial obligations including paying off its debt, to a sum of US $51.1 million for the year 2020, which has already been budgeted for.