President informed on proposals to  boost child protection | 16 May 2020 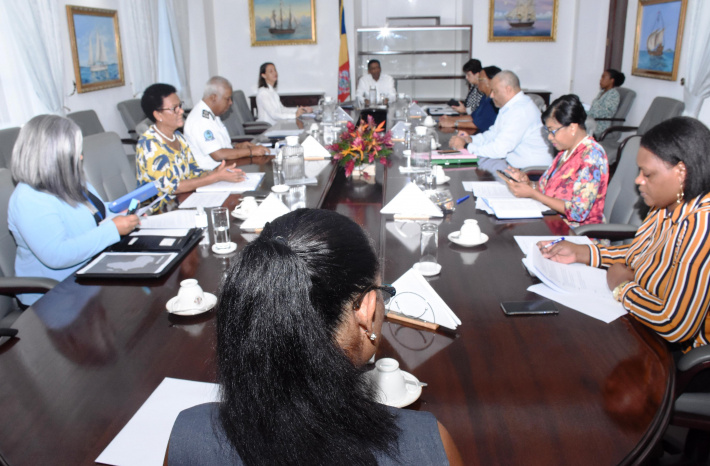 A second high-level committee meeting on child protection, headed by President Danny Faure, took place yesterday at State House to further discussions on reforms and approaches to strengthen the protection of children in Seychelles.

The meeting follows up on President Faure’s request for all partners involved in child protection to work collaboratively and review the structures, services and laws, and bring proposals to improve on child protection.

The committee comprises the Designated Minister, Minister for Family Affairs, Minister for Education and Human Resource Development, secretary of state for Health, Chief Justice, Attorney General, Commissioner of Police, Ambassador for Women and Children and the principal secretary for social affairs.

It was set up following the Supreme Court’s sentencing of three men for various counts of sexual abuse on children, a case which rightly received public condemnation.

The committee yesterday provided an update of the work it has been undertaking and presented its recommendation and propositions for reform.

“The Agency for Social Protection conducted internal assessments to identify structures and laws that are deficient. Together with the judiciary, we also came up with some recommendations which we then brought to the National Commission for Child Protection, the platform which groups other partners,” PS for social affairs, Linda William-Melanie, explained following the meeting.

Plans to introduce mandatory reporting of possible child abuse by doctors, nurses, educators, sport coaches and other parties; screening of persons who work with children and a review in police procedures are some of the proposals that have been brought forward.

Chief Justice Mathilda Twomey stressed that the country needs to modernise its legal frameworks relating to child abuse to ensure that these respect international and regional norms.

“For instance, we need to revise the procedures used when a child reports sexual abuse. It is difficult for a child to go into a police station and recount what has happened; it is even more difficult for them to stand in front of an identity parade and point out their abuser,” CJ Twomey explained.

“Unlike what we see on TV programmes, an identity parade is not conducted behind a mirror in Seychelles. Presently, the victim has to stand in front of the line up and then touch the perpetrator, and this does not help a child.”

She however noted that all of these reforms cannot take place without public engagement and participation.

CJ Twomey and PS William-Melanie also stated that a cultural shift is needed in the society to change the mindset of some people, even parents, who find nothing wrong with teenagers dating and having sex with adults.

The chief justice also had a strong word to say to media outlets which she feels need to be more conscientious of the content they produce.

“We feel that the work we are undertaking have been undermined by the media. I made a personal complaint in regards to a certain programme in a media outlet which, in my opinion, was full of false information and gave a sexual predator air time,” she stated.

“A breakfast programme, which then repeats later during the day, gave a platform to someone who raped a 13-year-old child and in which he was glorified as a reformed pastor. On our end we are encouraging children to come forward with their abuse stories but on the other end some are offering the offender a platform to state that the young victim is a liar.”

Even though the court is partly closed and is only dealing with urgent cases up until June 1, CJ Twomey highlighted that people can still put urgent complaints to the Family Tribunal during this period.

President Faure congratulates FSA for contributions to the economy | 27.05.2020