Allowing negotiation procedures to take place between employers and employees on payment of wages and the reduction of wages, including procedures also to make a Seychellois worker redundant before June 30, 2020, but effective as from July 1, 2020, was part of a general consensus reached yesterday between government, the National Assembly, the private sector and trade unions.

The half-day consultation meeting organised by the National Assembly was held at the Seychelles Trading Company (STC) conference room in the presence of the leader of the opposition, Wavel Ramkalawan, leader of government business, Charles De Comarmond and deputy Speaker Ahmed Afif.

Apart from other members of the National Assembly, top officials from the employment department, the Seychelles Chamber of Commerce and Industry (SCCI) and the civil society, the Praslin and La Digue business community were also present among other private sector stakeholders

It follows a series of meetings by government with the private sector and trade unions to discuss on an amendment to the Employment Act 1995 aimed at protecting workers’ employment from the impact of the coronavirus (COVID-19) pandemic until June 30, 2020. President Danny Faure also chaired one such meeting at State House on Saturday.

It was the National Assembly who adjourned a debate last week, until further negotiation on the bill proposed by the executive to protect the employees. The amendment brought in by government through the Minister of Employment, Immigration and Civil Status, Myriam Telemaque, sought to prohibit the deferment of payment of wages or the reduction of wages of an employee without the approval of a competent officer from the employment department.

It also prohibits an employer to initiate negotiation procedures to make their Seychellois worker redundant until June 30, 2020, when the Financial Assistance for the Job Retention (FA4JR) scheme, which guarantees salary payments for employees and self-employed individuals, ends. The National assembly, in majority, was strongly against the amendments citing that it was in favour of the employees over private sector employers, the job creators. The amendment though, is not applicable to expatriate workers who can be made redundant during this period.

The consultation meeting was conducted by a panel led by Hon. Bernard Georges, who is also the chairman of the Bills Committee in the National Assembly, along with the principal secretary for Employment, Jules Baker, Attorney General Frank Ally, Antoine Robinson from the Seychelles Workers Federation Union and business consultant Peter Roselie.

Hon. Jean François Ferrari, who brought a motion to adjourn the assembly debate on the amendment last week, and who was host to the meeting, said that the aim of the meeting was to consult and seek a solution to make the bill acceptable and workable for both parties.

He noted that the assembly is only seeking for employers, especially those who have not been assisted under the FA4JR scheme, to regain the freedom to initiate negotiations with their employees on redundancies, layoffs, salary cuts among other issues.

Speaking on two propositions Hon. Georges said the National Assembly wanted to see the go ahead negotiations on salary deferment or cuts by the employers and the employees but in the presence of a competent officer from the employment department. He further said that this will guarantee the oversight that government was looking for.

He noted that the proposition by the National Assembly is temporary during this transition crisis of the post COVID-19 and further to the country coming back to normal, the employers and employees will as before negotiate without having to go through a competent officer.

In the second proposition, Hon. Georges said that as not all businesses have been assisted under the FA4JR scheme, it is fitting to allow them some flexibility to start negotiations with their employees with immediate effect until end of June of which its implementation will start in July.

He claimed that both the employers and the employees will feel protected under the two propositions.

Most of the interventions wanted the bill to be scrapped and leave the original act as it is, citing that it was already guaranteeing negotiations between employers and employees.

PS Baker and Mr Robinson reminded, while accepting those propositions, it all boils down to achieving a balance between the rights and interests of both employees and employers, while still bearing in mind that the employees have less bargaining power than employers. They claimed the employees need to be protected against arbitrary decisions.

The consultative discussion yesterday was ahead of the Minister for Employment’s reappearance in the National Assembly today for continued debate on the amendment further to yesterday’s outcome. 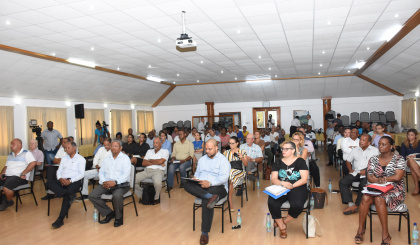