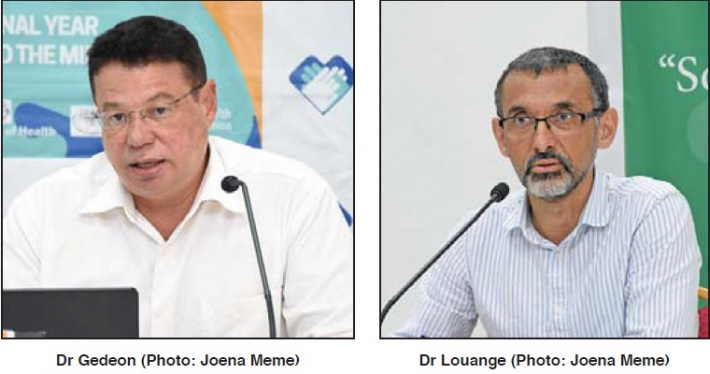 As the country gears up to re-open the Seychelles International Airport, the department of health is urging collective responsibility and stricter adherence to social distancing and other advisories, to avert the possible risks of a worse second wave of COVID-19.

Public Health Commissioner Jude Gedeon yesterday cautioned that despite not registering any new cases since April, Seychelles is not yet in the clear as it prepares to gradually reopen its borders as from June 1 under directives of the department, warning of a possible worse second wave of the pandemic, which could see local cases soar to 500 and over, if preventive measures are not followed.

“All 11 who were confirmed positive have recovered, so for the time being there are no active cases in Seychelles so the first wave has already passed. If we have a second wave, it might be worse than the first outbreak especially if the right prevention measures are not in place,” Dr Gedeon warned.

“We have observed especially over the past two weekends since the prohibition on movement was lifted that people are not observing social distancing, the beaches are over packed with large groups and still having large gatherings and parties and we find that disappointing as if we have any more cases and people are yet to internalise and apply the concept of social distancing, we will inevitably have to opt for measures such as strictly restricting movement and again shutting down some classes of operations and businesses,” Dr Gedeon said, terming such practices as “very irresponsible” and not in line with advisories issued by the department.

With regard to the strategy to eventually reopen the airport to commercial flights, Dr Gedeon stated that the department is currently preparing for such, conducting risk assessments on numerous markets and effecting training with frontline workers, including Customs and immigration staff.

Furthermore, the department is working with relevant stakeholders to install surveillance measures for all inbound travellers with emphasis on temperature checks and screenings.

For the time being, the department has received applications from private jet operators wishing to visit Seychelles in the foreseeable future.

“As per our projection, towards the end of May, we expect that the rate in other European states will be low enough for us to consider their market. If we look at the specific details, we will consult that states including Israel, Norway, Austria, Switzerland, are recording single or low-double digit cases which means that their situation is much better now than when we were imposing the restrictions. We are considering such information in devising a strategy for the reopening of inbound travel but this is just one of the many considerations when we are conducting risk analysis.”

“When the airport opens as from June 1, some new measures will be in place. There are certain infrastructural changes at the Immigration desk and the health desk. We have received quite a number of applications for inbound travel, especially from private jets, and we have informed them that we are not considering any applications until June,” Dr Gedeon added.

In order to be able to travel into Seychelles, travellers need to ensure that they remit to the department evidence of testing within 48 hours of embarkation on the journey to Seychelles. Persons who have not tested negative for the virus 48 hours within their travel to Seychelles will not be permitted entry and the onus is on the individual or airline operator to ensure that this requirement is observed and the information relayed to the department.

In line with President Danny Faure’s announcement, Seychelles will re-open its borders with more rigorous testing and quarantine. As such, the department of health has procured 20,000 antigen rapid tests to diagnose the presence of a protein of the virus in bodily fluids. Persons displaying symptoms of the virus and who are suspected to have contracted the virus will be tested at the airport itself, as such tests allow for early detection. Payment for the consignment is currently being processed and the first batch of tests is expected to land as from next week.

In relation to Seychellois citizens who are stranded in India and Sri Lanka, chief executive of the Health Care Agency (HCA), Dr Danny Louange, noted arrangements with national carrier Air Seychelles to repatriate them back to Seychelles. Persons who were not specifically authorised to travel either for medical purposes or to accompany individuals seeking medical services will have to cash out for the repatriation flight, although arrangements regarding payment are to be made upon their arrival within the country.

As for the Kenyan nurses and Batswana police officers who recently arrived in the country, they completed the mandatory quarantine period on Monday and have all tested negative for the virus. They are currently waiting to be absorbed into the healthcare and law enforcement system.