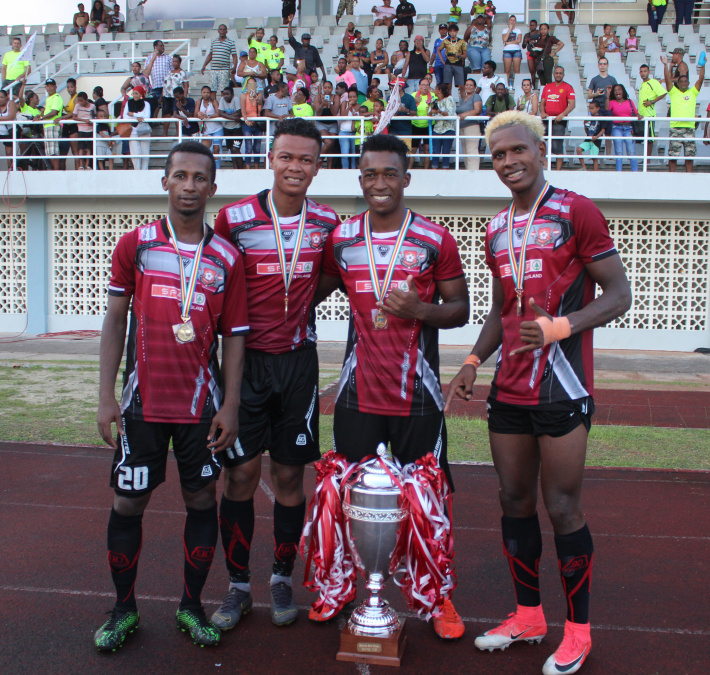 From left to right: Aly, Livakely who has since left to play in Reunion, Evariste and Francis

‘The break might have hindered our league chances,’ Aly thinks

SeyPearl Premier League leaders St Michel FC’s midfield maestro, Malagasy Hassan Aly is worried that the long break in the league due to the coronavirus pandemic might affect his team’s title aspiration for the 2019-2020 season.

The classy midfielder, who has spent almost a decade in our local league, thinks his team were in a strong position to return to their dominance of local football but feels they may find it difficult to regain their momentum after being away for more than two months.

“I am convinced if the league had not been stopped, we would have been crowned league champions and may have even gone on to claim a treble after winning the Airtel Cup early this season. But now we have lost our confidence and togetherness which has been our strength over the years and we might not find our rhythm for our remaining matches,” Aly told Sports NATION.

The diminutive playmaker arrived in the country in 2011 when he was recruited by La Digue outfit La Passe from Malagasy club Forson Tamatave but his time there hit a snag months later as his relationship with his Malagasy compatriots from the other club Anse Reunion ran him in hot water with his new club.

“I had been close friends with some of the Anse Reunion players since back home but this was not welcomed by my new employers and things turned for the worse when we lost to them in our first derby match and it seems I was made the scapegoat of this defeat and I soon found myself in big trouble and my career here was terminated abruptly as I was sent back home after only eight months,” reflected Aly.

However, Anse Reunion swooped to bring back this talented midfielder for the 2012 season though he admitted that he never expected to return so soon.

Aly made a huge impact upon his return with bitter rivals Anse Reunion where he inspired them to win the End-of-season cup where they beat Côte d’Or in the final.

“I was so grateful to Anse Reunion for taking care of me and fighting hard to secure my transfer from La Passe which was not easy, but I also encountered problems there with my salary which was late at times and this was a concern for me as I was working in the morning and training in the afternoon and deserved better as the cash was much needed to assist my family in Madagascar,” explained Aly.

Having attracted interest of top local clubs in his first full season with his all-action display on the pitch, Aly was a much-sought player where St Michel were keen to sign him but Anse Reunion were very reluctant to release him but finally succumbed to the record league winners’ wish.

“I wanted to stay with Anse Reunion but I had to consider my position as a professional player where my income was important and as a result, I decided to join St Michel where we won the President’s Cup in my debut match and also grabbed the Airtel Cup and SFF Cup that same season though we missed out on the league title which was won by Côte d’Or,” Aly said.

Aly began to enjoy success after success with this eastern Mahé club, grabbing the league and cup double in 2014 and managing to retain the league crown in 2015.

“I would say that the 2014 season was the best during my time here as though we did not always have the best set of players, but it is the discipline that exists at this club which has helped us to achieve success. Even in training, things are serious which unfortunately does not exist at all clubs. In fact, we get a lot of support and encouragement from the management even when the team are not doing well on the pitch and this is good for the morale of the players,” claimed Aly who is one of the longest serving foreign players in the local league.

Nonetheless, St Michel struggled during the 2016 season with only the Airtel Cup to show as silverware and then had a barren run in the next two seasons and Aly gave his views on what really happened.
“Our team were ageing and some players were reaching the end of their career so we had to bring new elements and it took time for the players to adapt to the St Michel way of doing things,” stated Aly.

As for the challenges that lie ahead, the experienced midfielder, who has been voted for three consecutive season as his team’s best player namely in 2015, 2016 and 2017, feels that this season the players were determined to return to the top.

“We made a good start and winning the Airtel Cup boosted confidence in the squad and we were on a good roll as we closed in on the league title, but the sudden halt may work against us as we have not been training and we don’t know what is going to happen as we await for information from our club. But personally, I hope the Seychelles Football Federation chooses to restart the league as I am determined to win this crown for the fans and management and also because we are unsure about what the future holds for us foreign players,” revealed Aly.

Aly made it clear though that he would like to prolong his career with St Michel next season due to his love affair with this club who he says has treated him well throughout the years.

“I would definitely like to stay here as I am very happy and know I still have more to offer for at least three more years but it depends on a lot of factors in this post COVID-19 pandemic and if I can stay fit and healthy,” remarked the 31-year-old footballer who said that he highly respects his former coach at St Michel, Ralph Jean-Louis, who he says has helped him a lot to improve his game.

For the time being, Aly is eager to get back to training and gearing himself to lead St Michel to more glory by winning the Holy Grail of the league crown to round off a highly successful season. 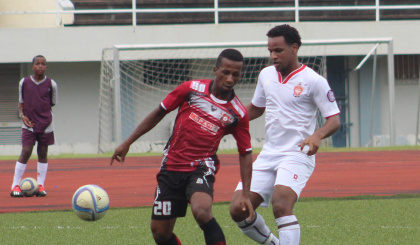