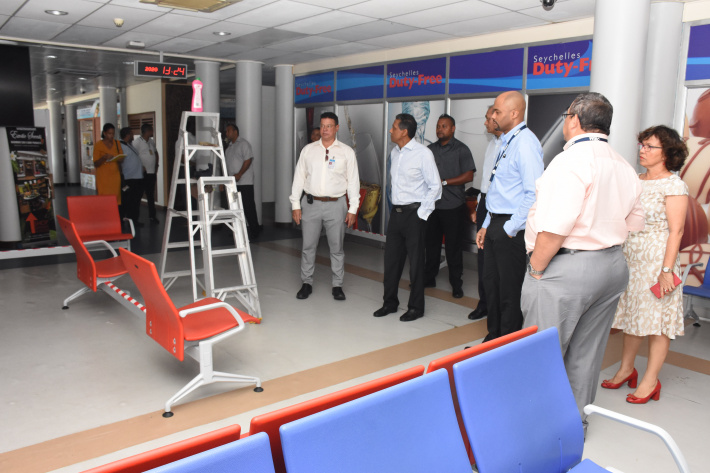 While the green light has been given for commercial flights to resume at the Seychelles International Airport on Monday June 1, the local authority responsible for aviation has already come up with several specific measures, enabling the airport to efficiently operate during the new normal, in a post COVID-19 era.

The measures include both physical adjustments, including newly set facilities at the airport, along with risk assessments on numerous markets and effecting training for frontline workers, including customs and immigration staff.

In addition, they are also working with relevant stakeholders to install surveillance measures for all inbound travellers with emphasis on temperature checks and screenings.

President Danny Faure, who also holds the health portfolio, yesterday had the chance to visit the airport, enabling him to see the adjustments done and also to meet with senior members of the Seychelles Civil Aviation Authority (SCAA) where he was briefed on the joint measures set by the authority, under the strict guidance of the department of health.

During yesterday’s visit, the Head of State, accompanied by the Public Health Commissioner Dr Jude Gedeon, was hosted by chairman of the SCAA Suketu Patel and the authority’s chief executive Garry Albert.

Most of the adjustments at the airport are related to the social distancing practice, including new sitting arrangements at the departure lounge, along with new demarcation at the check-in counters and baggage claim area.

There are also newly installed thermal cameras which will be used to detect people with fever-like symptoms that may be the highly contagious coronavirus.

There has been however some controversy regarding the effectiveness of the thermal devices, mostly due to the incubation period of the virus, which can be as long as 14 days.

An average incubation period of 5.2 days was assumed for this analysis and, on top of that, some cases are mild and even at their peak may not show symptoms.

According to Mr Albert, once the airport re-opens, the landing interval – the minimum time difference between two consecutive aircraft landing – will be increased from 30 minutes to one hour.

This, he said, will allow passengers to go through the various landing procedures, without creating any congestion.

Mr Albert also noted that since the closure of the airport, the SCAA had stepped up a support package for its operators to relieve the pressure on business operations for the industry.

This, he said, include support for airlines, in terms of waiver of all landing and parking fees for scheduled international operations by commercial airlines for the period April to December 2020.

He however noted that this is applicable only to air operators with no outstanding dues owed to SCAA as of March 31, 2020.

Furthermore, the authority has waivered all rentals, concessions due to SCAA for all airport tenants, including duty free, food and beverage outlets, retail and service providers, airlines, destination management companies (DMC), car hire facilities at the Seychelles International Airport and Praslin Airport for the period of April to June 2020.

Once again, this support is applicable only to operators with no outstanding dues owed to the company as of March 31, 2020.

He explained that support to existing airport operators, which are encountering financial difficulties during this downturn, will allow them sufficient business flexibility to recuperate and resume operations when business goes back to normal.

He added that the relief measures should create incentives to stimulate the market, facilitate resumption of operations and convey support due to financial difficulties by the aviation industry also.

Furthermore, the package will add value to the support provided by the government to ensure no loss of employment.

He also added that the SCAA is absorbing some of the losses incurred by the operators to make it easier for them to resume business as normal.

SCAA estimates the value of those supportive measures at R30 million.

The accompanying photos by Louis Toussaint show President Faure and his delegation being guided on a tour of the airport’s facilities. 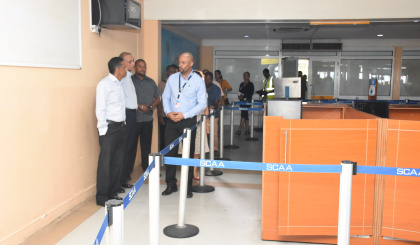 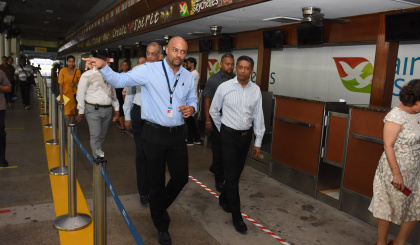