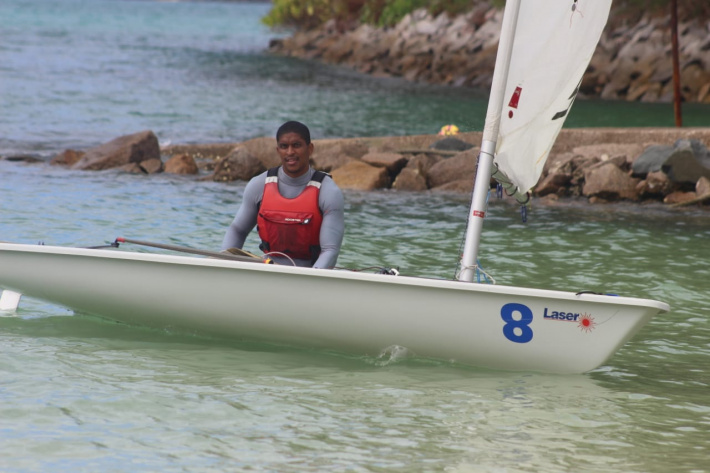 Reigning Sportsman of the year Rodney Govinden is eager to get his preparation for the summer Olympics Games in Tokyo back on track.

The first and only Seychellois athlete to qualify for the Games, Laser sailor Govinden has seen his well-planned schedule disrupted in its entirety by the coronavirus pandemic which grinded sport to a halt across the whole wide world.

Govinden was on a busy European schedule which he had meticulously prepared with his coach Miguel Andrade at the Viana Sailing Club as well as the Seychelles Olympic and Commonwealth Games Association (Socga). He was to spend about two months in an intensive training camp and compete on a regular basis across Europe but had to cut short his training camp in mid-March when it was announced officially that the Summer Olympic Games had been postponed due to the growing fears of the COVID-19 and he had to pack his bags and return home before the ban in airline travel came into force.

“I decided to fly back home after it was confirmed that the Olympics would be postponed especially as at that time, most European competitions that I had earmarked to take part in had been cancelled and more so the European championships which would have been the one that I had targeted in Germany in May,” explained Govinden.

After being out of the sea for two months, Govinden is eager to get back to sailing on the high seas though at the moment he has to wait until the sportsvenues are re-opened by the National Sports Council (NSC) on June 1 as per the health guidelines. At the moment, all sports venues are locked which is proving quite frustrating for sportsmen and clubs who were planning to start with low key training.

“I have been doing workouts at home twice per day to keep the body active throughout the lockdown though I am yet to return to sailing which I hope to do soon though it will be different to what I had been doing at the start of my training camp in Portugal,” claimed Govinden.

The two-time Sportsman of the Year added that he also needs to work out a training programme with his Portuguese coach and is still contemplating the possibility of returning to his base in the Iberian nation.

“I am still looking at different options though at the moment with the travel restrictions, it is quite difficult to return to Portugal. So I have to evaluate the situation and if things improve with travel movement, I might go but nothing is guaranteed at this moment in time. So I will prefer to follow the training programme from my coach locally and take part in local competitions though my training time will be much less compared to what I was benefitting during the training camp,” noted the African champion.

The Laser standard sailor says that his training locally will be for two hours only per day after working hours due to work commitment after just getting back to his job from a lengthy sabbatical leave.

“I realise that training locally will be quite limited in terms of time but I will have to make do with it for the moment and I will just have to try my best to get the maximum from these sessions, but I will wait for any possibility of at least competing in one top international competition. It will be a minor consolation for me in difficult conditions which I find myself facing this year,” remarked Govinden.

Despite the many hurdles he has to surmount in this post COVID-19 period, Govinden is determined to prepare for the 2020 Olympics postponed to next year where he wants to leave his mark after being the country’s flag bearer in his first participation at the Rio 2016 Games in Brazil.

“In hindsight I’m not disappointed that the Tokyo 2020 Games have been postponed as health always comes first and this delay seems to have given us more time to prepare but in my case, it has not worked to my advantage as the cancellation of international competitions is not helping my preparation. But I’m still confident that the Olympic Games will take place next year despite the doubts over the event with the continued concern over the spread of the coronavirus and therefore I will have to stay focused and continue in the best way I can as all the rest are beyond my control. So I will try to stay focused on the task ahead but my wish is to test myself in an international competition so I can measure myself against the best in the world before the real competition,” Govinden told Sports NATION.

Reflecting on how the 2020 season has panned out so far, the two-time Sportsman of the Year admitted that it has been a challenging year but he wants the athletes to stay positive.

“It has definitely been a tough year for all sportsmen but it has also been a test of character for all of us where we have had to stay focused and show our devotion. At the moment we have to be patient and maintain our training regime with our limited resources for us to be ready when the season restarts after the restrictions are lifted,” Govinden related to Sports NATION.

The 34-year-old sailor said that he wants this Olympic Games to be his final hurrah at this level before taking a backseat in the sport though he is not thinking of retirement just yet.

“I will put an end to my career at the world stage but I will surely keep competing after the Olympics but at a low key level such as at national, regional and African level as having a family and with work commitment, it is not easy to devote so much time to training. So this is the reason I want to leave a good impression at the Tokyo Games,” Govinden said in conclusion.