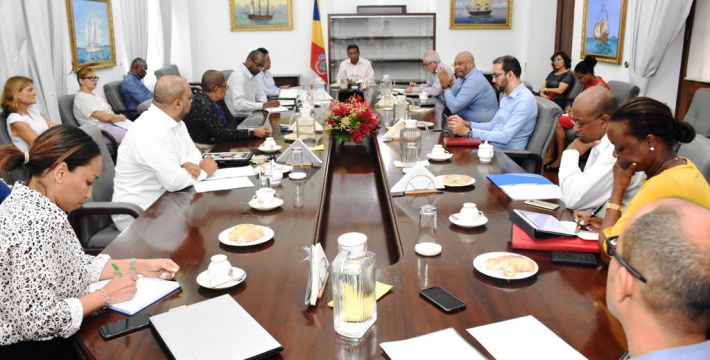 Relief schemes being implemented to reduce the economic impacts of COVID-19 on businesses, employment policies, procedures for gainful occupation permits are some of the topics discussed during yesterday’s third consultative session.

The meeting follows on from sessions previously held between the two sectors regarding the economic response to COVID-19.

Oliver Bastienne, chairman of the Seychelles Chamber of Commerce and Industry (SCCI), noted that the private sector further expressed its frustrations in regards to the financial assistance scheme for employees.

Mr Bastienne stressed that the procedures regarding this scheme needs to be reviewed in order to lessen the confusion and desperation felt by many businesses that were waiting for approval.

Aside from the salary payments for private sector, Mr Bastienne said that the meeting was an opportunity to share the feedback from businesses on the subject of the Central Bank of Seychelles’ relief scheme.

The Central Bank of Seychelles (CBS) committed a credit line of R500 million for businesses impacted by COVID-19 with a lending rate of 1.5%, to be paid over the course of three years.

The private sector yesterday raised points concerning the collaterals attached to this scheme and requested that the CBS look into extending the three-year payment plan for the loans.

Discussions also explored possibilities of setting up yet another scheme, this one geared towards assisting micro and small enterprises.

“This is to ensure that they get captured along the way because many of them have financial and non-financial limitations. It is important that they are supported during this difficult time,” Mr Bastienne stated.

He further noted that the meeting participants deliberated on procedures for GOP, during which private sector expressed concerns that the country “still has fundamental problem of labour shortage, both in terms of quantity and skills set”.

On her part the chairperson of the Seychelles Hotel and Tourism Association (SHTA), Sybille Cardon, noted that these consultative meetings have been productive, although there is more work still to be done.

“I’m pleased to note how the government has engaged the private sector in these discussions to come up with a consensus that will benefit both employees and employers,” she noted.

In regards to the delay in salary payments under the Financial Assistance for Job Retention (FA4JR), she added: “We have talked with the minister [for finance] and he acknowledged that the procedures initially used were not that effective.”

“He realises that some people have not been paid for April and are now waiting for their May salary. He has promised that everyone will be paid their April salary, even their May salary, by the end of this week.”

Antoine Robinson, who looks at workers’ welfare as secretary general of the Seychelles Federation of Workers’ Union (SFWU), noted that employees will have to be informed on how the financial schemes operate.