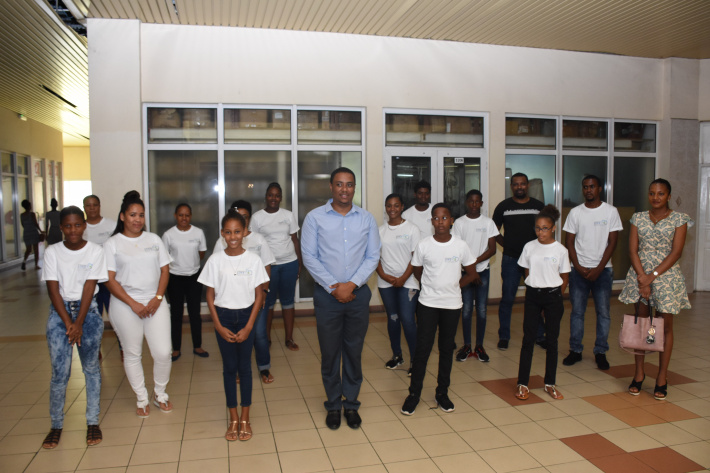 The sixth cohort in a souvenir photograph with Messrs Fred and Pierre (Pgoto: Patrick Joubert)

The Everlasting Love Ministry has launched its sixth cohort of the ‘Youth Ambassador’s Course’.

The launch of the sixth cohort of the ‘Youth Ambassador’s Course’, comprising sixteen youths aged 12 to 36 years, was held on Saturday morning in the conference room of the Citizens Engagement Platform Seychelles (Ceps), Orion Mall. The launch coincided with the tenth anniversary of the ministry.

Apart from the 2020 cohort, present were the executive chairman of Everlasting Love Ministry, Jude Fred; the chief executive of Ceps, Michel Pierre; the principal liaison officer in the youth department, Natarah Leon; parents and past participants.

The course, which will take place twice a week for six months, is aimed at empowering the youths to build up their moral and spiritual capacities to transform their own lives and also for others, especially the youths engaged in anti-social activities, among others, in the community.

Apart from the twice a week in-house training, the youths will indulge in community work, social projects, retreats and visits.

They will also be mentored on a one on one basis.

In addressing the youths, Mr Fred called on the participants to stay focused on the path they had taken as the ministry will be counting on them as agents of change in the society.

“I appeal to everyone in Seychelles, including the youths, that now is the time for us to join together to fight drug abuse in the country. That is why we, at Everlasting Love Ministry, empower the youth so that they can be transformers of the society,” he added.

He also called on government to facilitate NGOs and other organisations involved in the fight against social ills, so that they could organise programmes that will remove people, especially the youths, off anti-social activities.

He thanked all partners for helping to sustain the programme.

On behalf of the youth department, Ms Leon said that the department supports initiatives aimed at empowering the youths.

In her testimony, 14-year-old Annisa Banane, the 2019’s best participant, said that though with a bit of difficulty, the course has helped her to overcome the challenges in her life and thus bringing her closer to God.

“I’ve learned leadership skills, team work and the life I am supposed to be living and sharing with others as a human being,” she added, noting that the programme has changed her life.

Twenty-two-year-old Darino Esther, who claimed he was very anti-social before his affiliation with the ministry, said he joined the course so as to be more spiritually stable and also to gain the necessary baggage that will help him to reach out to youths who are leading a dangerous life in the community, especially those living in ghettos.

For 36-year-old Nadine Louys social ills are on the increase nowadays in society which is in need of help.

“As a youth who had worked with other youths in the past, when I was working in education, I said to myself why not join and gain more knowledge that will help me as a mother spiritually to raise my children and also to help other children and youths in difficulties,” she said while explaining why she joined the course.

The launch ceremony was punctuated by spiritual songs while course participant Nahida Hollanda presented the vote of thanks. She will graduate along with her colleagues in December 2020.

The first ‘Youth Ambassador’s Course’ was launched in 2011.

The Everlasting Love Ministry is an NGO founded in 2010 with a mission to reach out and educate the youth about moral and spiritual values so as to enable them to shun negative lifestyles. 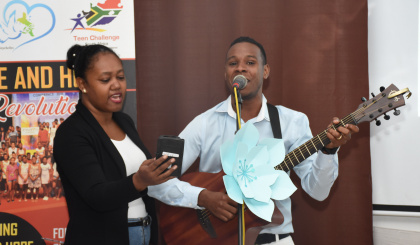 A song performance during the ceremony (Photo: Patrick Joubert)