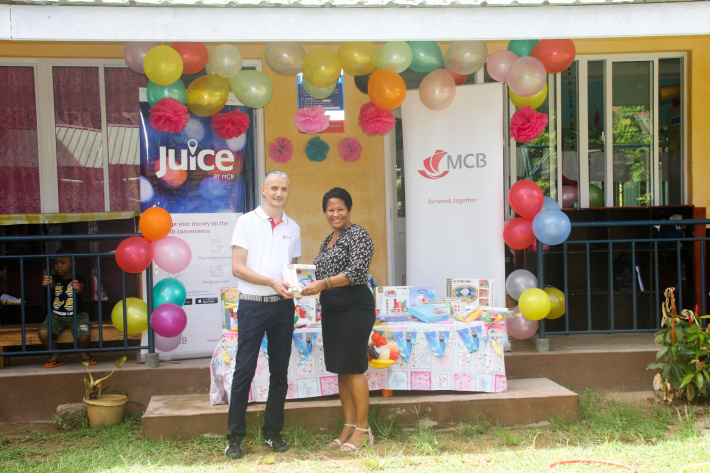 Mr Jackson hands over the donation to head teacher Lesperance

On the occasion of Children’s Day on June 1, the Grand Anse and Anse Kerlan creches on Praslin received a donation of books and educational materials from the Mauritius Commercial Bank (MCB).

The donation was handed over in a ceremony as the pupils geared up for a lovely day at the Grand Anse creche on Monday.

It was Bernard Jackson, MCB’s managing director, who officially handed over the donation to the Grand Anse Praslin school’s head teacher, Lina Lesperance, in the presence of the creche teacher in charge, Sultanne Monnaie, several MCB staff and teachers and pupils of both crèches.

The items will benefit a total of 114 pupils from both crèches as well as others with special needs from primary level.

“As teachers, we strongly believe that in order for children to develop educationally, it is vital that they have the necessary resources and the most basic resources for children at crèche level are manipulative toys. These help them in different subjects, assisting in developing their speech, communication methods, making proper use of their hands and developing creativity. This donation will thus help in general childhood development,” Mrs Monnaie shared upon receiving the donation.

The donation was made possible from the proceeds raised in the last MCB Praslin Eco-Friendly Run held in September last year. The race, which was organised by the Eco-Friendly Committee, raised a total of R7,915.00 from Registration fees. Eden Vit Water and one of the participants, Nathalie Houareau, generously donated towards the cause. The raised amount was then doubled by MCB to reach a total of R30,000 which was used to purchase the educational tools. To note that MCB was the main sponsor of the event alongside Cat Cocos which provided tickets at discount prices for Mahé participants to join the run.

“MCB is greatly focused on assisting the community and last year we helped in organising a race on Praslin in order to raise funds to assist one of the schools on the island. This is bearing in mind that the children are our country’s future and education will lead the way to their future success. We wish to help raise the level of education and help groom quality young professionals for the future. After the funds were raised, we identified the school’s requirements and decided on which one will be most suitable for this time’s donation. We agreed on donating educational tools to the two crèches in the Grand Anse district and in the future we hope to assist other schools in order to make a significant difference in the lives of Seychellois children,” Mr Jackson shared.

MCB also extended its gratitude to Giovanna Rousseau and the Eco-Friendly Committee, the National Sports Council (NSC) Praslin staff, sponsors, volunteers and participants of the race who all played a key role in making the race a success, thus this donation possible.

On their part, the young pupils had prepared a special song which they gladly performed to express their gratitude to the MCB team. 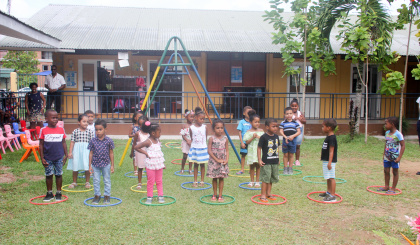 The children expressing their gratitude through a performance