The SRC team before the FPAC (Photo: Joena Meme)

Representatives of a number of ministries, departments, agencies and organisations appeared before the Finance and Public Accounts Committee of the National Assembly yesterday to answer different issues of concern raised in the 2018 Auditor General’s report in relation to the management of their finances, revenue collection, operations and functions.

Also attending the hearings yesterday were secretary of state for finance Patrick Payet, principal secretary for finance Damien Thésée, Auditor General Gamini Herath, members of the FPAC as well as key officials from the different bodies being questioned.

Addressing everyone present at the start of the hearing sessions yesterday morning, the chairman of the Finance and Public Accounts Committee (FPAC), the leader of the opposition Wavel Ramkalawan, highlighted that over the past years different government departments, organisations, agencies have been interacting with the FPAC to clarify issues picked up by the auditor general in its reports, and a lot of progress has been made in terms mostly of financial management, administration as well as on the procurement process. He added that relations between the FPAC and the administrative and financial units of these entities have improved greatly as all parties have a better understanding of each other’s work.

The hearings were led by FPAC’s vice-chairman Ahmed Afif.

First to appear before the FPAC yesterday was the Ministry of Environment, Energy and Climate Change headed by its respective principal secretaries Alain de Commarmond (environment) and Wills Agricole (energy and climate change).

Among the different issues raised were several instances where payments have been made without the proper documentations and authorisation by the principal secretary or accounting officer. There are 12 cases where payments show no quotations were sought before vehicles were rented. In two such cases     where a sum of R41,000 was incurred, no invoices were attached to the payment vouchers. In another   14 cases payments were made for different services, namely painting, maintenance, cleaning amounting to a sum of R158,000 but there again the three quotations were missing.

PS Agricole explained that he has evidence that the payments were authorised by two accountants but he went on to point out that there have been instances where both PS were absent due to international obligations and in these cases the directors general act on their behalf. He went on to highlight efforts under way to address the payment issue and their discussions with finance and their accounting officers to resolve the matter.

PS de Commarmond, for his part, went on to clarify the issue relating to transport expenses, their contract agreements with two car hires and also the need for more refresher training for related staff members in key fields like procurement.

Other issues raised were related to discrepancies with petty cash, instances of fraudulent practices by a former accounts officer which the police are investigating among several other issues.

PS Angelique Antat of the department of industry and entrepreneurship development and other key officers from her department answered questions pertaining to three main issues raised in the auditor general’s report, namely wages & salaries, use of goods and services and discrepancies in petty cash.

The department of information communication and technology (DICT) was the next to clarify issues raised in relation to the overpayment of responsibility allowance towards a director.

PS Benjamin Choppy explained that the case was an administrative oversight and the person paid back the sum received in one go once the error was brought to his attention. Other points concern a sum of R35,082 which was outstanding but this has been collected except for R5,000 which has been written off. Furthermore, a dormant balance of R42,800 was used to buy office equipment such as printers. Meanwhile, PS Choppy confirmed that the issue in relation to the government laptop scheme, the DICT passed on to the ministry of finance the responsibility to effect payment.

Mr St Ange was asked to detail efforts underway to minimise transport expenses and issues related to fuel coupon, vehicle logbook, reports on accidents and maintenance works which were not being properly recorded.

The principal secretary for the department of risk and disaster management (DRDM) Paul Labaleine and key officers from the department had been called in to answer questions and shed more light on issues relating to surcharges on payments, payments carried out twice, over payments for internet, payment for vehicle rental as well as the procurement process. A sum of R28,700 for internet monthly for DRDM, considered a small department, was termed excessive by FPAC member Jean-François Ferrari. A sum of R300,000 for rental of a car from January to October 2018 also raised a lot of questions. PS Labaleine’s explanations on the department’s work programme and the use of the vehicle did not convince some FPAC members as his office could not prove that the best quotation was sought and he affirmed he was not benefitting personally from the vehicle but that it allowed them to move more freely and perform their duties well.

He affirmed that they tried their best to bring down the cost of their expenses but FPAC members said there is no proof that DRDM made an effort to find a cheaper vehicle than the Kia Sportage and there had been gross negligence on the part of DRDM and mismanagement of public funds.

But PS Labaleine insisted that it was not the intention of DRDM to rent the vehicle but circumstances proved otherwise and he detailed the numerous related challenges they faced.

But he recognised there had been some shortcomings somehow and they are in talks with the finance department to resolve the issue as soon as possible.

Other entities that appeared before the FPAC yesterday afternoon to answer questions about their finance management, payments and revenue collection among other issues raised in the auditor general’s report were the department of youth and sports headed by PS Fabian Palmyre, the Seychelles Revenue Commission (SRC) led by commissioner general Veronique Herminie and the Creative Industries and National Events Agency (Cinea) headed by its chief executive Galen Bresson.

The FPAC resumes its hearing sessions this morning. 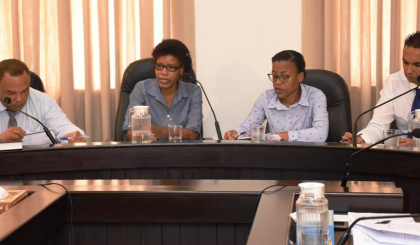 The team from the Ministry of Environment, Energy & Climate Change (Photo: Thomas Meriton) 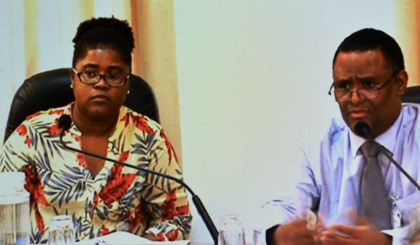 The team from the youth and sports department (Photo: Joena Meme)