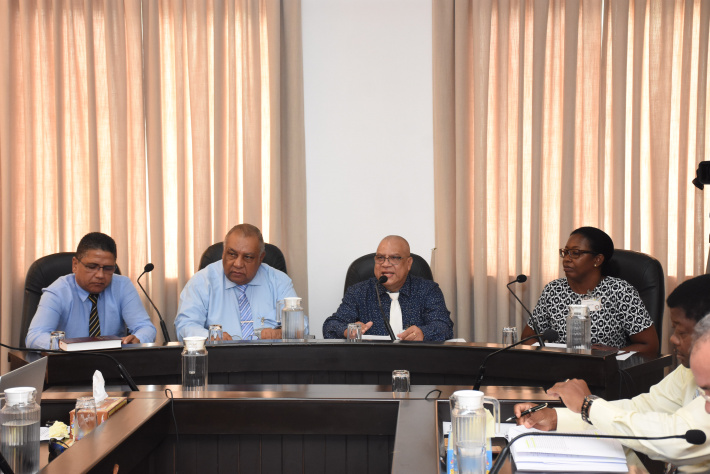 The Finance and Public Accounts Committee (FPAC) of the National Assembly yesterday held a second public hearing for the week in which it addressed with various ministries, departments and agencies the issues and recommendations highlighted in the Auditor General’s 2018 report.

The first entity to appear before the committee was the Public Health Authority (PHA), represented by Public Health Commissioner Jude Gedeon and Dr Meggy Louange, as well as the authority’s director general for administration and human resource and the financial controller.

Members of the committee queried about anomalies in payments issued to board members and administrative processes which were found not to be in accordance with the standard of procedure and was satisfied that the issues have been rectified over the past year.

FPAC members were particularly concerned with the procurement process, of which mention was made throughout the report and previous editions, and upon the explanation that human resource is limited agreed to make a recommendation to the Ministry of Finance, Trade, Investment and Economic Planning to make an exception to the temporary freeze on recruitment and permit the PHA to recruit a procurement officer to avoid such problems in future.

Chair of the committee, Wavel Ramkalawan, was satisfied with the session.

The committee enquired about similar issues in relation to the Seychelles Tourism Academy (STA) regarding adherence to regulations relating to procurement and stock-taking. As with the PHA, principal of STA Flavien Joubert confidently stated that the academy has acted upon the recommendation of the Auditor General and ensured to follow the right process.

Mr Joubert further clarified the sum of R63,000 for four business-class travel tickets for the principal himself and Patron of the academy Claude Narain noting that currently, Mr Narain, who has been instrumental to the successes of STA, travels to Seychelles at his own expense. Explaining the airfares for which approval was not sought from the Office of the President, Mr Joubert highlighted travel to partner’s meetings held annually in Mauritius, an explanation which the committee was satisfied with.

FPAC member Ahmed Afif led the session with questions pertaining to delay in the use of high-value items, namely kitchen equipment, heavy-duty washing machines and furniture, to a sum of R5.8 million, which were to be incorporated into the second phase of a project at the academy, all of which were acquired in 2014.

The second phase of the project, which was sponsored by the Arab Bank for African Development (Badea) was originally planned as a triple storey structure consisting of offices, a multi-purpose hall, as well as a 60-room hotel and villa. Mr Joubert explained that the consultant, Frankie Petrousse, who was also the contractor working on the project “disappeared”, and the 17 stores of equipment which was under the responsibility of the consultant also left behind. Phase one of the project was completed albeit after schedule and a new project manager has been assigned to the project. Plans for the project are being revised to take into account the current needs of the academy. Financing is yet to be finalised and Badea is considering sponsoring the second phase according to the panel.

Some equipment such as televisions and DVD players were donated to the youth hostel as well as some furniture. The committee recommended proper storage of the equipment so as to avoid further wear and tear.

It was proposed by the committee that an audit be conducted on phase one of the project to establish the possible inconsistencies in the undertaking of the project.

Principal Joubert also presented to the committee a policy pertaining to casual work undertaken by students in tourism establishments. The policy aims to provide a framework for the establishment of who outsources the help of students on a casual basis from the academy to issue payment to the school to then be disbursed to the student, in a bid to avoid instances whereby students face difficulties in getting their dues.

FPAC members also acknowledged the various challenges the academy is faced with, affirming their support for the academy and encouraging its leaders to keep on striving.

As for the Seychelles Licensing Authority (SLA), represented by chief executive Andre Pool, deputy chief executive Jessica Larue and Accounts technician Karine Andre, FPAC members queried about the procurement of IT equipment worth R390,000 without quotes to which Mr Pool clarified that the equipment was acquired over the course of the whole year and that each instance was higher than the threshold for which the procurement regulations apply. He also noted that due to the nature of the work, it is not always possible to seek three quotations for services such as printing which require specific types of paper and adherence to strict security measures, to avoid fraud and criminal practices.

In relation to the payment system which glitches and shows two transactions as one transaction, Mr Pool noted that the Department of Information and Communication Technology (DICT) manages the system assuring that transactions are not affected but the issue relates to numbering of the receipts.

The committee was also concerned with license fees for telecommunications companies which are based on the respective company’s revenue as detailed in their audited financial statements and reports, to which Mr Pool noted that currently it is only awaiting that of Cable and Wireless whose submission was delayed due to the change in ownership and the local outbreak of coronavirus and mitigating measures implemented. He admitted that the dossiers were not organised but have since been rearranged in the proper manner.

Chair Ramkalawan praised the SLA for their commitment, noting that the exchange was encouraging and wishing them the best for the future.

Chief executive of the National Botanical Garden Foundation (NGBF) Raymond Brioche appeared alone to address the committee’s questions, most of which were centred around the fire in 2017 which resulted in the loss of office equipment and many documents as well as causing damage to the main office block and the ex-situ conservation lab.

Honourable Afif pointed out that the entrance fee from the gate was collected five days prior to the fire by the then accountant who was not named for reasons he stated as an audit, but later denied having any records. According to Mr Afif however, details were later pulled from the Treasury’s linked system, and there were clearly some issues related to cash flow.

Mr Brioche noted changes in procedures in handling cash with the aim of promoting more transparency and work has been conducted to put in order the affairs of the Trust.

“At this point, I appeal to the Ministry of Finance, in the case of departments and agencies such as us who are not well-versed in finance, to conduct internal audits, maybe every six months. I am not financially-savvy and therefore cannot go around conducting forensic work and doing accounting,” Mr Brioche stated, highlighting the lack of supervision in some entities, especially when leaders are not accustomed to financial processes.

Mr Brioche also noted improved revenue collection and improved monitoring over the past year, in response to Honourable Jean-François Ferrari who pointed out that revenue has multiplied sevenfold according to the report, leading him to question whether there was corruption and embezzlement of such funds in previous years.

Mr Brioche affirmed that the issue of the lost revenue and fire are still under investigation and the case is being considered by the Anti-Corruption Commission.

The committee requested the NGBF’s payroll, as well as the names of all members of the board, asserting that they need to offer more support to Mr Brioche himself as CEO.

The Seychelles Agricultural Agency (SAA) was represented by chief executive Linetta Estico and principal secretary Antoine Marie Moustache who clarified that a legal officer has been recruited to ensure that payments are collected from farmers for agricultural land, so as to recover overdue debts amassed by the agency over the years.

The committee also addressed loopholes in procurement and asset-registering, all of which are being rectified through training and development, as well as the adoption of new practices and were satisfied that efforts are being made in line with the notions of transparency and accountability.

As for the Livestock Trust Fund (LTF), PS Moustache noted that as of October 1 2018, certain benefits from the fund for producers of poultry and pork as well as for abattoir services, in a bid to encourage local production. Mrs Estico further elaborated to note that many projects materialised by SAA are funded by LTF.

FPAC committee members concluded the session by pointing out that a name change for the fund should be considered, on account that other projects such as roads and bridges are financed under the fund, proposing that it should be called the agricultural fund so as to avoid confusion. 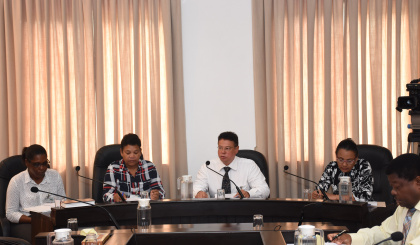 The team from the Public Health Authority (Photo: Thomas Meriton) 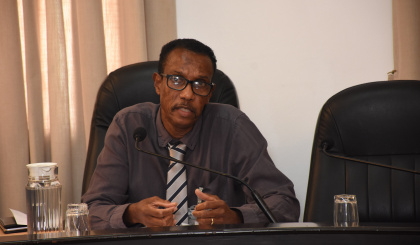 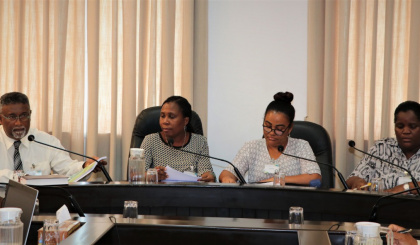