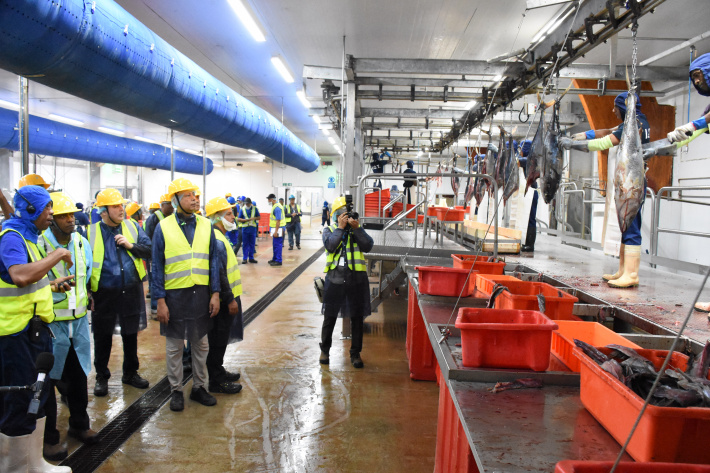 President Danny Faure yesterday visited the Indian Ocean Tuna Ltd (IOT) as part of his ongoing visits to organisations that were in the frontline or were operational during the coronavirus (COVID-19) pandemic.

Apart from witnessing work in progress, the aim of the visit was for the president to bring his support to the management and the ordinary workforce of IOT and to thank them for the work they are doing, especially on work done during the restriction movement, which had played a significantly role in the Seychelles economy.

In commending the work being done, President Faure said he was very impressed with developments going on in the factory and also the satisfaction he sees on the faces of some of the ordinary workers, through his interactions with them.

He also announced that the government has given its approval for the new incoming general manager (Ricardo Luzio) who will be taking his post when the conditions, in relation to COVID-19, allow. Mr Luzio is replacing Nichol Elizabeth who has already left the post as general manager.

After being welcomed by the head of operations, Herve Girouard, the environment health, safety and security manager, Mark Benoiton and board members Frank Hoareau and Rupert Simeon, President Faure was guided on a tour of the canning factory, starting at the fish cleaning area, the assembly line, packaging area, store area and the quality lab control.

Though it was not possible to interact with all the workers, President Faure did manage to interact with some of the workers from the different areas he visited. He was also to visit the dock area but it had to be cancelled due to pouring rain. The visit ended with a brief meeting with the senior management.

Following the meeting, Mr Benoiton said that it had been an honour to receive President Faure at IOT for him to see work being done to help sustain the Seychelles economy.

He claimed that at the time of the lockdown, IOT was one of the pillars for foreign exchange earnings and that the canning factory contributes to 15% of GDP in the economy.

Mr Benoiton stated IOT saw an increase in production during the lockdown from 290 tonnes per day to 335 tonnes per day and therefore there was a need for further recruitment whereby 250 locals have been employed after the lockdown. He said that IOT will continue to recruit more Seychellois to work at the factory as the target is to reach 400 tonnes per day by September 2020. Workers are allowed to work on six-month contract and full time, while enjoying all the salary benefits. The workforce now is 68% expats and 32% Seychellois. Its main market is France, United Kingdom and Italy.

He added that IOT’s products – among which feature John West, Petit Navire and Mareblu products among others – are available on the local market but it is not in control of the prices at which they are sold, though it had not increased the price of these commodities. The majority of the tunas used in the canning factory are bought from fishing purse seiners.

With government holding 40% shares, managed by Société Seychelloise D'Investissement Limited (SSI), its director Mr Simeon, in shedding light on the change of the senior post at IOT, explained that Thai Union (60% owned since 1995), through its transparency process, has the responsibility under the agreement to choose general managers for IOT. He said that Seychelles is happy to work with and support any general manager in place, be it a local or a foreigner.

Two long-serving employees, Ramsy Denousse (fill and cap) and Joan Figaro (senior supervisor fish cleaning) said that though the work is hard, they love doing it and it is for that reason they have stayed for so long.

They claimed that a lot of progress has been made and they encouraged other people to join as they hoped to stay on with the canning factory for job security.

But before the visit, President Faure had a brief conference call with the Thai Union’s operation director manager of Europe, Sven Massen and IOT’s incoming general manager, Mr Luzio, who is already a GM at a Thai Union’s factory in Portugal.

The accompanying photographs taken by our photographer Jude Morel show some highlights of President Faure’s visit. 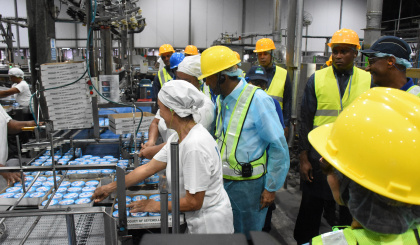 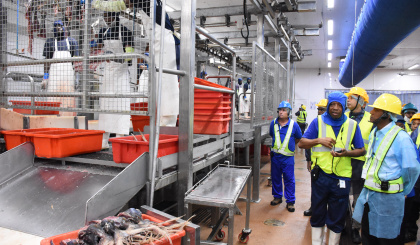 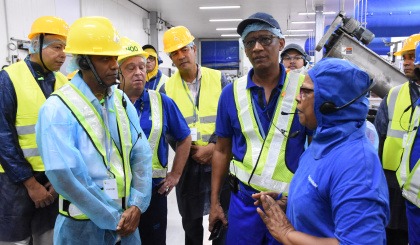