Vice-President Meriton (at head of table) speaking at the launch of the course (Photo: Jude Morel)

“What exactly is the blue economy?” is a question on the lips of many who, although aware of the concept, are still unfamiliar with what exactly it entails. In a bid to demystify the blue economy, the Blue Economy Research Institute (BERI) yesterday launched a free online course in which interested persons can become familiar with the concept and the good work and progress made by Seychelles and other states.

The launch of the course entitled ‘The Blue Economy: Sustainability, Innovation and Our Ocean’ which coincided with World Ocean Day, also marked the beginning of Ocean Week, which was also launched by Vice-President Vincent Meriton yesterday morning at State House.

The introductory Massive Open Online Course (MOOC) developed with the Commonwealth of Learning and the University of Seychelles, is aimed at persons from various backgrounds, both technical and non-technical and provides an opportunity for new knowledge to be developed, regardless of how little the participant may know.

Once participants sign up, they will be able to access numerous learning materials including videos and course-related materials, all of which can be accessed through a PC, laptop, tablet or mobile phone and internet access.

“The course is the second edition, we offered the first one in 2017 and now we’ve expanded on it so instead of being one course, it is now four courses. This is the first course, we already have over 1000 registered participants from all over the world, most represented nation from Fiji, 19 Seychellois, 63 from Mauritius and others from North America, South America, Asia and people from the Caribbean, so it will be a great community for a lot of people who are engaging in the course,” director of the BERI, Kelly Hoareau, stated.

Upon completion of the course, participants will be able to explain the blue economy concept, including the challenges and priorities that it presents, to recognise the importance of eco-system services to the blue economy as well as being able to identify ocean sectors that have the potential to support livelihoods and wellbeing while considering what is needed for a resilient ocean.

The second part of the four-part course is scheduled to be released in July, with the third version in August and the last and final in November with more focus on integrated ocean management, integrated financing, ocean governance and key sectors such as fisheries, tourism and marine security.

Speaking at the launch, Vice-President Meriton noted the innovative efforts of Seychelles as a country over recent years, iterating the importance of the ocean to island life and other aspects of life such as food security.

“The theme for this year is sustainability, innovation and our ocean. The ocean also has the potential to find other sources which we can use towards the development of our country. Concerning innovation, Seychelles has always been ahead of small-island states. The first innovation in 2018, in the sixth United Nations conference on the Ocean, was the launch of the first-ever Blue Bond in the world. The second innovation is that we dedicate 30 percent of our Exclusive Economic Zone (EEZ), 1.358 million kilometres square, to protect it for longevity and sustainability of development in our ocean,” VP Meriton said, expressing congratulations to BERI for the initiative to raise awareness and demystify the blue economy.

Members of the department of the Blue Economy’s Youth Advocacy Group also had the pleasure of being among the first to register. 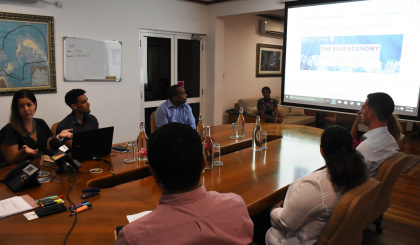 Following a presentation during the launch (Photo: Jude Morel)