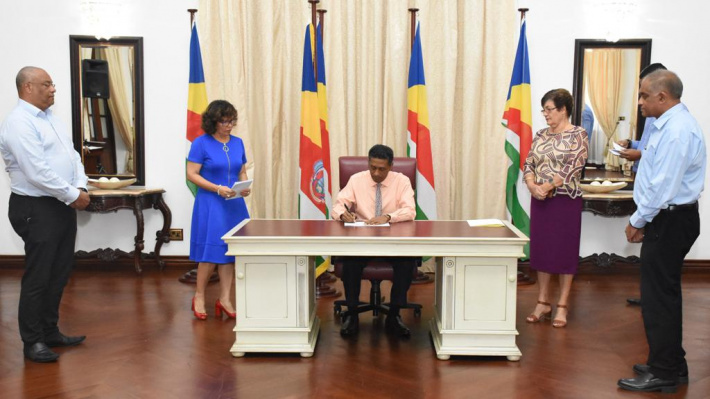 President Danny Faure has assented to the Domestic Violence Act 2020 which was passed by the National Assembly on May 26, 2020.

This was during a short ceremony yesterday afternoon at State House.

The law is the first of its kind and legislative work on the Domestic Violence Bill has been in preparation for several years.

The Domestic Violence Act prohibits acts of violence in the domestic context, whether caused through emotional, verbal, physical, sexual, economic or psychological abuse as defined by law. It also provides for the protection of victims of domestic violence and for penalties for the perpetrators.

On that occasion, Family Affairs Minister Mitcy Larue noted that “today is indeed a great day for the Seychellois society. We are all aware that domestic violence is a breach of one’s human rights. Far too often, we find that our societies have many misconceptions around domestic violence. Due to this, victims are sometimes not given the help they deserve and need. Many of these attitudes are rooted in a ‘blame the victim – they should just leave’ mentality. As a caring and compassionate nation but one which is just and fair, we aim to ensure that indeed we do take care of the victim, and also cater for those who perpetrate the violence”.

She further stressed on the fact that “we will not rest on our laurels, now that the Act has come into force, I would like to record that we have made legal provision to provide services including immediate medical attention; emergency legal counselling and referrals; crisis counselling to provide support and assurance of safety; and confidential handling of all contacts with victims of domestic violence and their families. As a government, we will continue to support training to enhance the capacity of our police officers, members of the legal profession, our psycho-social support personnel, members of civil society involved in the implementation of the legislation and, as important, to continue with our awareness campaigns to challenge negative social norms, beliefs and cultures that perpetuate and condone gender violence”.

The principal secretary for family Affairs, Marie-Josée Bonne, traced the evolution of this law. “From 2007, Seychelles put in place its domestic violence strategy which was closely followed by its Costed Plan of Action and one of the actions of the action plan is indeed the introduction of legislation which seeks to criminalise domestic violence. The assent of this law is the fruits of our work for all these years. As a country affiliated with the United Nations, we signed the convention to eliminate all discriminations against women. This convention asks all countries to review their system and procedures to combat domestic violence. By having this law, we can now reinforce the actions against domestic violence and at the same time to help the abusers. It is not only a punitive law but it is also about how to help the population. It is a great honour for us to have a law that will criminalise the domestic violence,” said PS Bonne.

Why did it take so long for Seychelles to have such a law? Mrs Bonne noted that two studies were conducted before, one in 2006 and the other in 2016 in order to evaluate the situation in Seychelles.

“We had to do all these so that we can formulate the policy then turn it into a law. Nowadays, there are more people who are reporting domestic violence cases. This legislation will make provisions to repeal the Family Violence (Protection of the Victims) Act of 2000, it will, inter alia, reinforce the role of the police, the judiciary, medical personnel, ensure that victims do not retract from moving forward with a case, provide the mandate within which targeted training will take place, and also ensure that government provides for permanent physical refuge(s) for victims to be able to receive comprehensive support and assistance to be able to move away from the cycle of violence,” she added.

The signing of this law was witnessed by the Minister for Family Affairs Mitcy Larue, the Attorney General Frank Ally, secretary of state for cabinet affairs Mohamed Afif, principal secretaries and members of the Citizen Engagement Platform Seychelles (Ceps).