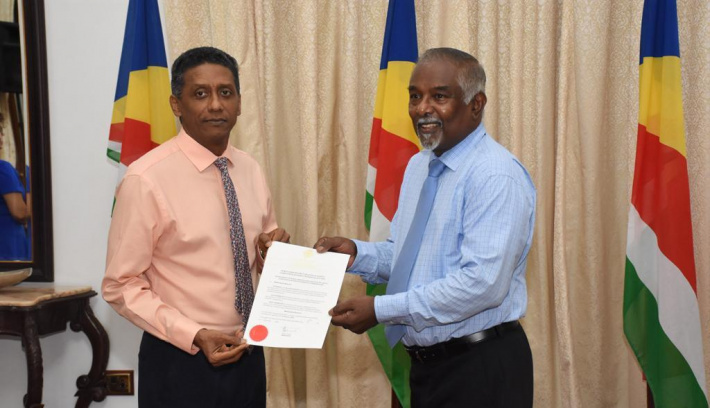 In a short ceremony, also attended by the secretary of state for cabinet affairs, Mohammed Afif, President Faure appointed Justice Bernardin Renaud as commissioner following approval of his nomination for the position by the National Assembly, in line with the Public Persons (Declaration of Assets, Liabilities and Business Interests) Act, 2016.

Talking to the press, Justice Renaud noted that “this appointment means no more no less, I am ready to serve! It also represents another opportunity for me to serve the country. I have accepted to serve in accordance to the law. The work starts now and I need to get an office and the staff and start as soon as I can. This law, The Public Persons (Declaration of Assets, Liabilities & Business Interests) Act, 2016 makes provision for the declaration of assets, liabilities and business interests by the president, vice-president, designated minister, ministers, members of the National Assembly, including the speaker, deputy speaker, leader of the opposition, leader of government business, the mayor of Victoria and the councillors of district councils.

How will this law work?

“We will start by distributing the forms to the public persons to fill in and may be, to have a meeting with them to talk about the law so that we are on the same wave length. Once filled, all forms will be with the commission and the law also stipulates that if anybody thinks that any of these declarations are false, then the commissioner has to intervene and make sure all documents are correct. Irrespective of elections, all the public persons must declare their assets, liabilities and business interests,” said retired judge Renaud.

So, is this law timely? Justice Renaud noted that “work on this law started in 2016 and when we plant a seed it takes time to grow and now it has flourished. When I hear people talking, I feel that we think we are a big country! No we are a small island state and we progress with the resources that we have. We did not uncover any big treasure! We do with what we have and when we can. I understand this very well as I have been part of many developments. After retiring as a judge, I have had enough time to do other things. On Monday and Friday, I dedicate to the Human Rights Commission. Now I will set up this office, make it function and prepare it for someone else to take over later on,” concluded Justice Renaud.

Justice Bernardin Renaud joined the civil service in 1965 and is one of the longest serving public officers. He played a key role in the transition of Seychelles from a one party state to a pluralistic system when he chaired the meetings of Constitutional Commission that laid out the foundations for the Constitution of the Third Republic, and was the director of elections for the referendum that approved the Constitution, as well as for the first Presidential and National Assembly elections in 1993.

He was sworn in as the first Ombudsman of the Republic of Seychelles in November 1993. In 2004, he was elevated as judge of the Supreme Court and then served as justice of the Seychelles Court of Appeal from May 2017 until his retirement in May this year. After his retirement last year, Justice Renaud was appointed chairperson of the Human Rights Commission of Seychelles.