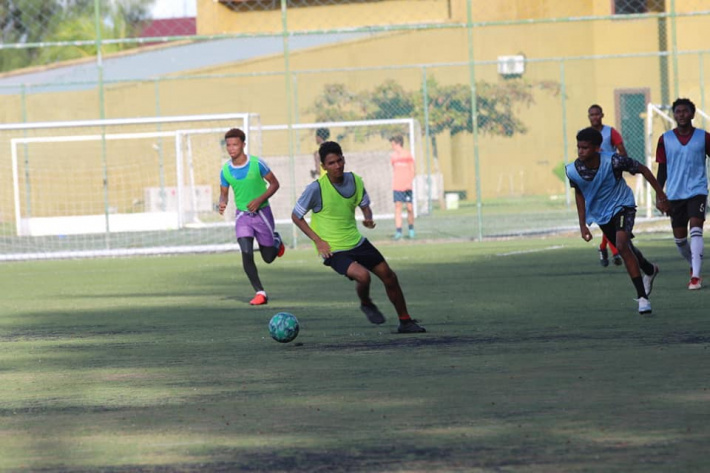 Action from the friendly encounter

Following the temporary suspension of all local sports activities as part of the safety precautions against the coronavirus (COVID-19), the Futuro Sports Sesel Academy and Foresters under-20 selections brought football action back to the Astro-turf pitch Roche Caïman last week during a friendly match.

It was the perfect opportunity for the two selections to showcase their tactics and their style of play which made it an enjoyable and entertaining encounter, while other teams are waiting for their chance to show their talent in a youth competition.

Foresters Youth played a 4-3-3 formation, while Futuro started in a 3-1-3-3 formation with high pressure on their opponents.

The main ambition of all the players was to get a good result and that was clear in the intensity of the match with several tackles in the 'red' zone of both teams, while both coaches made it a good 65 minutes of friendly encounter.

Mutual respect on and off the pitch was also another key element in the success of the match.

In the early stage of the match, both teams had their chances, with Foresters using the well-known kick and rush often to try and destabilise the three Futuro defenders who managed to do a remarkable job.

On the other hand, the Futuro players were stopped regularly by a very good Foresters’ central midfield and a great defence, blocking up the passing game of the young Futuro players.

In the 22nd minute following a mêlée in the box after a corner, Clarisse was in the right position to rifle the ball into the net.

The supporters were calling for offside, but with two players waiting at the posts, there was no reason for the goal to be disallowed.

Foresters asserted more pressure and tried to get back into the match, and a couple of minutes after the opening goal, Michael Payet was just outside the six-yard box when he played the ball back to 15-year-old goalkeeper Ladouceur, but he missed the bouncing ball which rolled into the back of the net (1-1).

Foresters went all out to secure a win but in the last 20 minutes the best chances fell to Futuro. They had a goal disallowed for offside and were denied a penalty.

This was a great chance for all these young players to clock some valuable playing minutes and plans for a rematch are being made already.

Futuro would like to thank Foresters for this friendly match and are calling on more youth teams to contact both coaches for more friendlies as the young players are the future stars of Seychelles’ football.