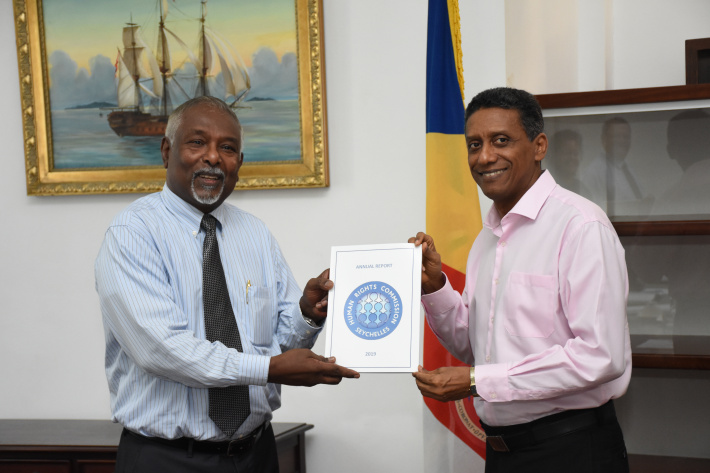 The Seychelles Human Rights Commission has recorded 32 complaints in relation to human rights abuses in the country from March 2019 to December 2019 since the start of its function in March of the same year.

The five-member commission – Michelle Lacoudraye-Harter (deputy chairperson), Barbara Carolus Andre, Michelle Marguerite and Roger Toussaint, led by Justice Renaud, were at State House to present the annual report (March 2019-December 2019) to President Faure and to also consult with him on pressing issues and recommendations regarding administrative matters in relation to staffing and finance, impacted by the coronavirus (COVID-19) pandemic.

After the meeting, Justice Renaud said that apart from discussing on administrative matters, human rights violations, the complaints recorded, including the introduction of the commission’s five-year master plan, the discussion with President Faure was also levelled at a better systematic working relationship between government ministries and the commission which is not working too well between both parties at the moment.

“The president has accepted our proposal for us to meet the council of ministers, including the attorney general. We will explain to all the ministers on the functions and the role of the commission among matters and issues in relation to human rights, and also on how we can systematically collaborate together, so that when we start to work with them they will understand better and things will go easier,” he added, noting that the law provides for an annual report to be presented to the minister responsible (President Faure).  The cabinet meeting with the commission will be held on July 2, 2020.

“It’s better that we understand each other well than we continue to send letters just to get no response in return,” Justice Renaud said, claiming that the people of Seychelles also lack knowledge of the functions and the role of the commission and the commission is seeking funding from government to recruit additional key staff for the educational and investigation process.

He also said that the president has also agreed for the commission to be allowed to monitor and to make recommendations on all government bills and policies in white paper stage as the law gives the commission the overall responsibility to oversee and monitor all drafted bills and policies, including signed international treaties in relation to the international human rights charter, so that they are on par with chapter (3) of the human rights charter in our constitution.

Justice Renaud remarked that the commission also works in close collaboration with the Judiciary and the office of the Ombudsman and therefore other than receiving complaints it can also bring cases to court as a last resort to seek redress in cases of human rights violations.

He added that apart from getting direct complaints, the commission also picks up and takes notes of general issues, with regard to human rights abuses or incidents, from press reports and from the social media, among other sources.

The Seychelles Human Rights Commission is an independent body that came into effect in 2019 with the swearing in of four of its members in March 2019, followed with the swearing of its chairman, Justice Renaud, the following July, after President Faure appointed them following consultations with the Speaker of the National Assembly Nicolas Prea on candidates proposed by the Constitutional Appointments Authority (CAA) as prescribed in Paragraph 5(1) of the Seychelles Human Rights Commission Act 2018.

Its role is to engage in mediation, conciliation and negotiation so as to enable it to investigate and detect human rights related abuses and make recommendations to the government. It is also expected to bring better, faster and wider recourse to afflicted parties.