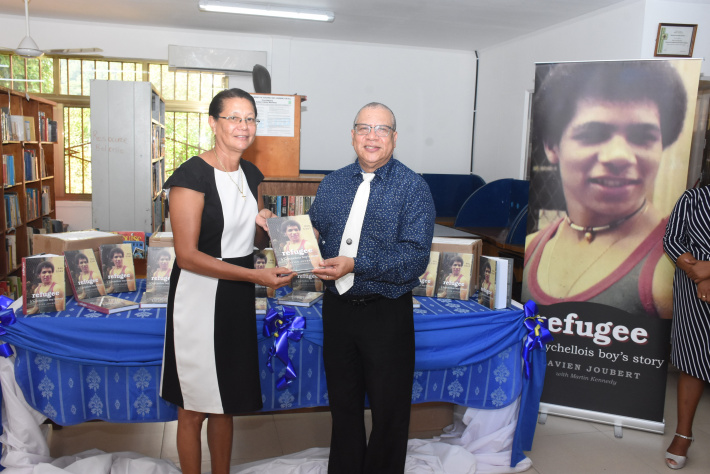 Flavien Joubert’s life has been a fascinating one. Long before this prominent hospitality professional became principal of the Seychelles Tourism Academy (STA), he experienced, at the tender age of 17, a dramatic and unexpected journey, learning a few unforgettable life lessons in the process.

Now students in secondary and primary schools will be able to read about Mr Joubert’s experience as a refugee in Cyprus in his new book – entitled ‘refugee, a Seychellois boy’s story’ – that he donated to the Ministry of Education and Human Resource Development yesterday in a small ceremony at the Plaisance secondary school, which was also his old high school.

Mr Joubert handed over 100 books to the school.

The ceremony was attended by the principal secretary for Early Childhood, Primary and Secondary Education, Dr Odile de Comarmond; Raymonde Lavigne, head teacher of the school; student body representatives among other guests.

The book, the fourth of his written collections and a departure from the culinary and cocktail aspects, is a true experience story of Mr Joubert as a young 16-year-old boy on scholarship training in Cyprus but who ended up a being a refugee for three months during the war that happened there in 1974.

Mr Joubert said that he had been living with the refugee experience for so many years, waiting for the right moment to tell the story.

“The book is a gift for the young people of Seychelles,” Mr Joubert said, noting that there are a lot of pedagogical lessons to be learned by the youngsters.

Mr Joubert described his experience at boarding school in Cyprus as being totally different from his working class upbringing in the Seychelles. The young student found the school’s accommodation and spacious grounds impressive, luxurious and well-maintained. He describes his experience with warmth, despite this being a period of Cypriot unrest. “Though the school had only one controlled entrance and was well-guarded, I was privileged and very happy as a young Creole boy from the Seychelles to be a student in this very prestigious boarding school in Cyprus.”

“I was moved from camp to camp, along with other refugees, food was scarce and sanitation was basic. As we moved to safety, bombs would be dropping not very far from our camps.”

Despite being forced to endure the summer heat sleeping in tents without bathing, dehydrated, hungry, thirsty and dirty, the young Joubert never lost hope. Instead, he became “a star in the refugee camp”.

As he describes it: “I entertained, told jokes, told my refugee friends that we would all survive this war and go home”.

Mr Joubert added that what kept him going was the fact that he grew up in poverty and what he endured at the camp was not that far off.

The book, which was published in Mauritius, was put together with the assistance of author and former principal of the International School, Martin Kennedy.

On her part Dr de Comarmond said that Mr Joubert’s experience as well as his book is very inspirational and every student should read it as there are many life lessons to be learned in it.

“The book shows the many sacrifices that he went through and young people should look up to that as it will teach them to continue to persevere as Mr Joubert faced many obstacles in order to get to where he is today,” said the PS.

She commended Mr Joubert’s strength in overcoming his obstacle which will serve as a source of encouragement for young adults around him.

The author was thanked by Dr De Comarmond on behalf of the ministry and she added that it would have been ideal to have Mr Joubert tell his story through appearances, but due to social distancing this will have to wait.

Ms Lavigne thanked Mr Joubert as well and added that the school is very proud to host this donation as Plaisance secondary school is special to Mr Joubert.

“As a language teacher I found the book ‘refugee’ very moving and I will encourage everyone who can get a copy to make time and read it as it’s not only a book but also a story about jumping over hurdles and making a name for yourself,” she said.

For those wishing to have a copy the book is available in book stores for R400. 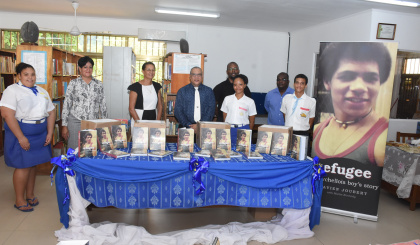 A souvenir photograph of the occasion (Photo: Louis Toussaint)