Four witnesses appeared in the 76th hearing of the Truth, Reconciliation and National Unity Commission (TRNUC) yesterday. A fifth witness to appear before the commission did not receive the notification letter while another was ill and could not make it.

Four witnesses were called in by the commission in relation to Case 0205: Sidna Umbrict concerning her brother, Claude Monnaie, who died in October 2003 on Praslin when a pick-up truck belonging to a Walter Constance was set on fire with him inside.

The first witness in the open session, police officer Superintendent Jack Valentin, who was an assistant superintendent and the regional commander for Praslin and La Digue at that time in 2003, said he was not present when the incident occurred as he was on his weekend off with his family on Mahé.

He said he only received a call around 9.30pm on that Saturday, from one of his officers on Praslin who informed him of an incident involving a vehicle which was on fire at Baie Ste Anne Praslin and that the driver of the vehicle was severely burnt in the incident.

Superintendent Valentin said that he went back to Praslin on Monday the following week and visited the scene and from further information from his officers, it suggested that people had set the vehicle on fire.

He said he made the necessary arrangements for an investigation to be carried out in the incident under the charge of Inspector Ericson Charles from the CID branch, Mahé.

He claimed that Mr Charles, as per regulation, was supposed to have consulted with him on his findings and from his response, from there, he knew nothing about the investigation on the death of Mr Monnaie.

He further claimed that Inspector Charles would have been in a better position to disclose the happenings surrounding the incident.

Superintendent Valentin remarked that he learned on the grapevine and from the media that somebody else was to suffer the fate of Mr Monnaie, who was mistaken for that person.

He noted that during his one year as regional commander in 2003, apart from state security officers who visited the island, he had never witnessed the presence of the army on the island as in the past.

He stated that two months after the death incident, he was sacked from the force along with ten other police officers, for reasons unknown to him at that time.

He said that the only reason for their sacking given by the Commissioner of Police at that time, Andre Kilindo, to the media was that they were not performing well in their duties.

He said he was re-instated in the force following the appointment of the new police commissioner Kishnan Labonte.

The hearing went into close session with one other witness as two others did not make it as mentioned above.

Earlier in the morning, Terry Biscornet from the Seychelles Planning Authority (SPA) was the first witness to appear before the commission to give evidence in relation to Case 0137: Donald Hoffman who alleged in his complaint that he purchased land on La Digue (parcels LD 1839 and LD 1840) and was refused planning permission to develop the land.

He also alleged that it was Mr Biscornet who informed him that the land could not be developed as the government had declared the area as a reserve.

Mr Hoffman had also claimed that when he asked the government to buy the land from him following it being declared as a reserve, this was also refused.

Responding to the allegations, Mr Biscornet while giving an overview of the procedures of land development under the Town and Country Planning act, noted that the applicant must submit a planning application for comments and recommendations from various competent departments and agencies (environment, health, land transport among others) prior to coming back to the Planning Authority within fourteen days for approval by the board.

He remarked that the decision to refuse Mr Hoffman planning permission to build was collective through multi-sectoral consultation.

He added that it was the board that refused Mr Hoffman’s planning application and not him.

He further added that Mr Hoffman submitted his application on December 21, 2005 for the subdivision of land parcel LD 1265 and LS 1268 and not as mentioned above by the commission.

He claimed that Mr Hoffman’s application went through the normal procedures until the environment department, in January 2006, informed that it could not locate the beacons.

He noted that after the beacons were located and identified in February 2006, a comment was received on April 2006 from the environment department recommending refusal for the development to take place as the land falls in the Vev (Paradise Flycatcher) territory (a protected area) and will also have an adverse visual impact on the vegetation.

Mr Biscornet said that in early June 2006 the Seychelles Planning Authority wrote to the environment department requesting for a re-assessment of the development planning proposal with a view to seeking ways as to how the area that does not fall in the Vev territory could be developed.

He stated that on June 22, 2006, the environment department reviewed its decision on the provisional refusal notice and compromised to allow the continued co-existence of the Vev and development under guided recommendations.

He further stated that Mr Hoffman was allowed to build on two plots, with one plot to remain in the reserve for ecological reason, which Mr Hoffman accepted and was signed by him (Mr Biscornet) in January 26, 2007.

He added that when he stopped for a while working for the Seychelles Planning Authority, the director general at the time received a letter from the lawyer of Mr Hoffman stating that his client was inconvenienced by the static affairs regarding his plot of land and that he cannot do any development on the land due to it being reserved for ecological reasons and requested that the restriction is removed so that he could develop his land or the reservation is maintained and that government is made to purchase the land at market price value.

Mr Biscornet said on November 29, 2007, the director general wrote back to inform that reserving the land for ecological reasons was a condition of approval for the subdivision of the land and that Mr Hoffman was aware of the condition. He said that Mr Hoffman, through his lawyer, was advised to contact the land division in relation to the sale of his land as it was not the mandate of the Seychelles Planning Authority to deal in land sale transaction.

With regard to parcel LD 1839 and LD 1840 on which Mr Hoffman alleged that he was not granted planning permission to built, Mr Biscornet said that these parcels were as a result of a subdivision and an amalgamation of parcels LD 1265 and LD 1268. He called on the commission to take note that these two parcels were sold in 2011 to a Seychellois company for a development which was also refused by the Seychelles Planning Authority in May 2015, based on the request of the environment department.

“On the whole, Mr Hoffman was given permission to develop part of the land but he didn’t. His lawyer could have advised him on that,” Mr Biscornet said.

In another open case, Ward Govinden, who was called as a witness in Case 001: Dorothy Chang-Him in relation to the death of his brother Davidson Chang-Him who was shot on June 5, 1977 at the Central Police Station, said that he was the wrong person the commission had sought as an eye witness to the shooting incident. He said during the time of the coup and the shooting of Mr Chang-Him, he was at his residence at Machabée. The commission apologised to him for the inconvenience. 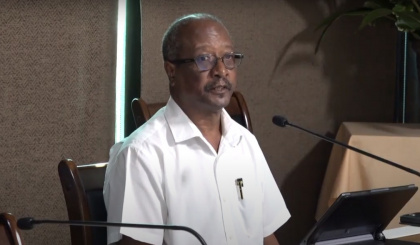 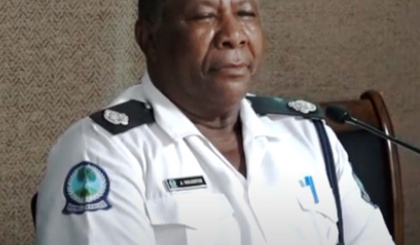