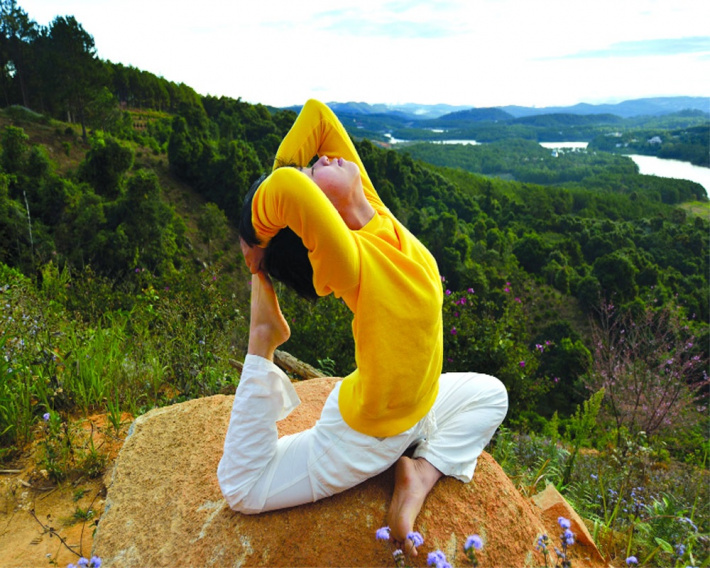 While shooting his film, Yoga for Health & Global Harmony, filmmaker, art historian and photographer Benoy K. Behl realised that inner harmony is the answer to the prevailing issues.

Almost for a decade I’ve discussed health and yoga with senior mainstream doctors in India, USA and Germany. All of them agree that inner peace is essential for a healthy immune system. It is essentially the balance within us which protects and heals us. Of course, medicines are also required when things go too far. Perhaps, that is why the Chitrasutra (the oldest-known treatise on art-making) says that art is the most valuable treasure of mankind. In this time of COVID-19, Ajanta presents the most beautiful image of inner harmony and the peace of spirit within us. This is Bodhisattava Padmapani, the Bearer of the Lotus (5th century).

In the ancient tradition, such images were created for us to look upon them and to awaken those qualities within us. I’ve recently completed the shooting of the film ‘Yoga for Health & Global Harmony’ in India, USA, Japan, Germany, China, Bahamas, Costa Rica, Brazil, Colombia and Argentina. During this time of extreme stress because of the pandemic, these are some excerpts from the commentary and interviews of the film which can be helpful for our general well-being.

It was the dawn of civilisation when yoga was conceived 5,000 years ago in the Indian sub-continent. By the 8th or 9th centuries BCE, a collection of beautiful verses called the Upanishads were composed. These verses crystallised deep philosophical ideas, which would last forever. Yoga was fundamental in the vision of life contained in these.

The three-thousand-year-old Katha Upanishad says, “He… whose senses are uncontrolled, who is not tranquil, whose mind is not at rest, can never hope to attain the true self, not even through knowledge.” It also says, “The supreme being is formless and cannot be discerned by the senses, hence, all knowledge of the eternal must be acquired by the more subtle faculties. These are developed only through the purifying practice of meditation.”

In an interview in the film, Dr Ananda Balayogi from Puducherry, who is a yoga expert as well as a medical doctor, shares, “The biggest question that is asked by the research scientists today is how does it happen? However, ancient rishis, who were the great scientists of that time, asked who am I? Modern science has its eyes outward. It is always looking at someone else, something else or some place else. The yoga dhristi, the yogic perspective has always been inward. Looking at one’s own self, understanding who we are, knowing the answer to the question, kaunhain hum (who are we)? If you want to go in everything has to be still, right from your body, emotions, mind. That is why the yoga rishis adopted still postures to stabilise the mind and went on to finding oneself. In recent times, science and spirituality have been separated. This was not so in that era. Yoga is the challenging study of consciousness itself, understanding one’s body, emotions, mind and beyond that understanding one’s true self. Conquering the fretful disturbances of the world around, great thinkers researched deep into the self. This was an epic project spread over many centuries. A science of life was developed to help us to know ourselves better. To help us attain peace and joy, which can be found within.”

In another interview yoga expert, Minakshi Devi Bhavnani, says, “Unless one’s sole purpose of taking up science is to achieve liberation, to evolve one’s consciousness to grow in spirit, I don’t think one should use the word yoga. They can use any other name.”