The Truth, Reconciliation and National Unity Commission (TRNUC) broadcasted only two live witness interviews yesterday: Raymond Bonte and Ibrahim Afif. The third witness who was scheduled to appear in TRNUC’s last afternoon session was not able to appear due to him feeling unwell.

Ex-army officer, Major Raymond Bonte, came before the TRNUC yesterday to answer to claims made by Ian Delorie (Case 0193).

The claims state that after he was threatened and persecuted for his involvement in the student strike against the National Youth Service (NYS), Mr Bonte approached him at Pirates Arms and requested that he leaves Seychelles.

Mr Delorie believes that if Mr Bonte had not warned him, he would have been killed.

Certainly not a new face to the commission, Mr Bonte has appeared on several prior occasions to address allegations made against him and to provide an overview of the army operations since he was not only a commanding officer but also a member of the defense forces’ committee from 1977 to 1986.

Mr Bonte yesterday claimed that Mr Delorie was not fully honest with the commission.

He stressed that it was incorrect for Mr Delorie to say that his safety was not guaranteed if he stayed in Seychelles.

According to Mr Bonte, there were a lot of people who stayed back but who were not killed. He further said that he had never received orders to kill someone.

“I do not recall much. Maybe I was taking a drink at the Pirates Arms at that time, I saw him – and Pirates Arms was a place where people talked all the time – and it could be possible that I told him to leave the country because of the opportunities out there. And he was not the only one I have told to leave the country – it’s like immigrants going out to other countries to take hold of the opportunities there and if they do not like it they can always come back. This is what I was trying to say,” Mr Bonte explained to the commission.

He noted that he had even sometimes paid the airplane tickets for some people who wanted to “take these opportunities and develop their skills” abroad, and added that some have come back to Seychelles while others have opted to remain in the countries they migrated to.

He recounted a story where he supposedly helped a man to travel abroad, some 30 years ago, and this person later on looked for Mr Bonte to reward him for his aid.

Mr Bonte also responded to allegations made in case 242 brought by Doreen Bouchereau about prisoners escaping from the Long Island prison, of which Mr Bonte was in command.

He also addressed Alwyn Talma’s claims (case 306) concerning an incident at the Coral Strand Hotel disco where Mr Talma was the assistant manager. He alleges that Mr Bonte attacked and strangled him to the point of unconsciousness.

Mr Talma claimed that he could not do anything against Mr Bonte at that time because he was protected by the regime.

In regards to Mr Talma’s case, Mr Bonte replied that it was untrue that he walked around with state security officers.

“Mr Talma was an arrogant man. I went to the disco that night and he said ‘here comes Albert Rene’s pédés’ and I did not hear that comment. But the person next to him did,” Mr Bonte recounted.

This comment incited an altercation by Mr Bonte’s friend who did not take well to them being referred to in such a way.

“He punched him [Mr Talma] and that was it,” Mr Bonte said while adding that he never threatened a doctor not to give Mr Talma a medical certificate.

As for Mrs Bouchereau’s case, Mr Bonte said that he never released any prisoners, adding that prisoners often escape, noting that the police should be dealing with these issues not the commission.

He noted that the person in charge of prison does not deal directly with prisoners but rather prison guards do.

“I would not know there were arrangements made between prisoners and prison guards – it’s not easy to know these arrangements,” he stated.

Ibrahim Afif was called in by the TRNUC in relations to Claude Moulinie’s claims that, after the death of Simon Desnousse and Mike Asher – his co-conspirators in ‘Konplo 412’ – Radio Seychelles began to broadcast the room 412 plot recordings in which his name is mentioned.

On advice, Mr Moulinie reported to the police and gave out a statement. He was later interviewed by Geva Rene about his involvement in resistance activities, and Ibrahim Afif was present to record the interview.

Mr Afif started off by stating that Claude Moulinie happens to be a family friend of his since their families were neighbours.

He recounted his experience on June 5, 1977, the day of the coup, when Mr Afif was the first person scheduled on the roster to open the radio and present the morning programme ‘Up and About’.

“I had left home at around 5.15am. I was on the way and down from Fôret Noire road, somebody came from the opposite side of the road and told me that Mancham had been overthrown. I smelled alcohol so I thought he was probably drunk[…]”

Mr Afif said that he received a ride to the radio station, and once he reached the station he was confronted by a man with a gun.

“I was left there with a gun pointing at me, he asked me to put my hands up which I did so. I was quite scared; I wished I had not gotten out of the car,” he told the commissioners.

He noted that Olgivy Berlouis was at the station and asked him to stay outside.

From outside, Mr Afif could also spot Marjorie Baker and Douglas Cedras, and after Mr Berlouis spoke to them for a while , he came back to tell Mr Afif that he was not needed at the moment.

He was notified that he might be called into the station during the day.

As Mr Afif reached home, he said he was beckoned by the Moulinie family to come to their house for a cup of coffee and they informed him of what had been announced on the radio, since he had not heard it.

Once he had completed this part of the story, Mr Afif explained that indeed the conversation between Paul Chow, Gerard Hoareau and Mr Moulinie, which was recorded, was broadcasted in the first radio programme of ‘Konplo 412’.

He expressed that he was quite surprised to have heard Mr Moulinie’s voice in the recording.

Mr Afif said that they were not allowed to take away any tapes that were handed over for copying and hence why they used to record in a room at State House, which ironically used to be former President James Mancham’s bedroom.

According to Mr Afif, Mr Moulinie did not show any signs of fright but he was obviously very guarded. Mr Afif believes that Mr Moulinie was telling the truth during the interview, albeit not the whole truth. 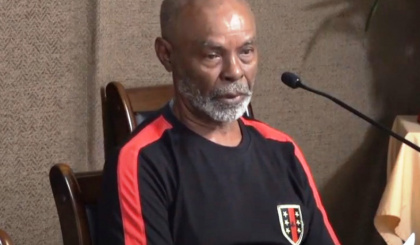 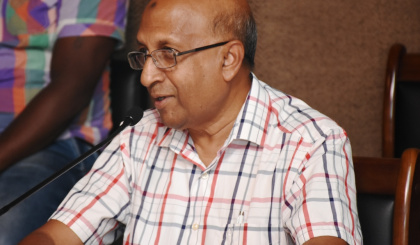