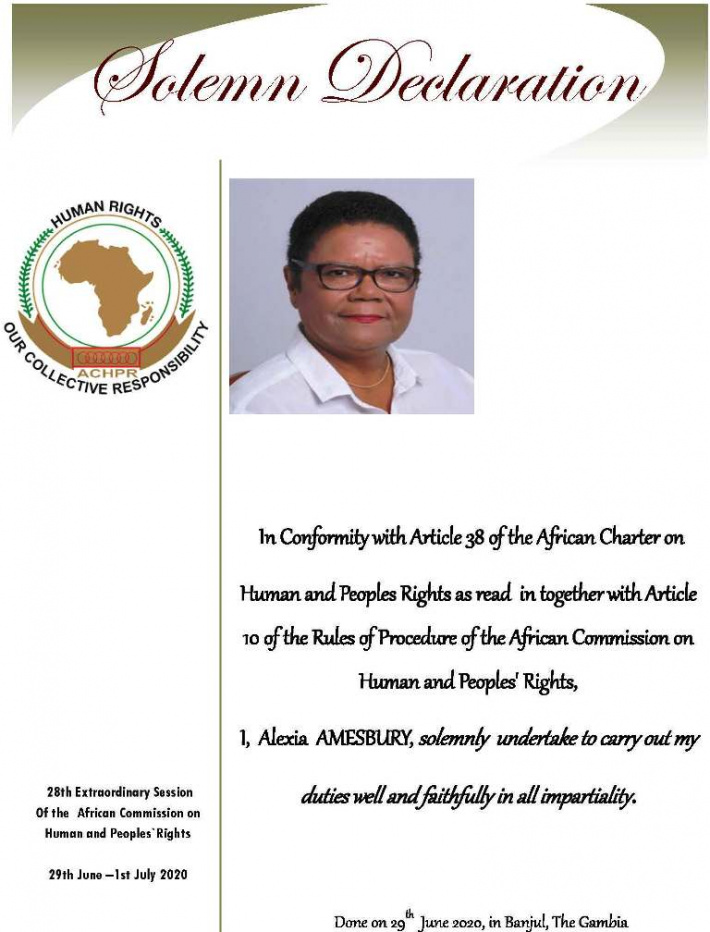 Alexia Amesbury sworn in as commissioner

Seychellois lawyer, politician and human rights activist, Alexia Amesbury, was yesterday sworn in as one of the four new commissioners on the African Commission on Human and People’s Rights during its 28th extraordinary session.

The historical event was made possible through a Zoom tele-conference which was live streamed on YouTube.

It is the first time in the commission’s history that the extraordinary session is organised virtually, due to the ongoing COVID-19 pandemic.

Closer to home, it is the first time that a Seychellois is elected and sworn as a commissioner on the African Commission on Human and People’s Rights (ACHPR), and this was made the more special since it occurred on Seychelles’ Independence Day.

Interestingly, perhaps to mark this occasion, and to showcase her pride in her country, Honourable Amesbury sworn in with the flag of Seychelles standing proudly next to her seat.

The swearing in ceremony had initially been expected to take place in Banjul, The Gambia during the ACHPR ordinary session scheduled for April 2020.

Aside from Honourable Amesbury, three other new commissioners were also sworn in yesterday: Dr Marie Louise Abomo from Cameroon, Mudford Zacharia Mwandenga from Zambia and NDiamé Gaye from Senegal.

They replace four former commissioners whose terms of office have come to an end.

The ACHPR is composed of 11 commissioners, nationals of member states of the African Union elected in their individual capacity.

Chairperson of the ACHPR, Dr Solomon Ayele Dersso, started off the session by administering the solemn declaration to incoming commissioners as per Article 38 of the African Charter, Rule 10 of the Rules and Procedures which guides the commission.

“Ours is also a very onerous and yet aspiring responsibility of working to realise the ideals and values of the African Charter, namely as provided in the preamble: freedom, equality, justice and dignity.”

“We need this protection as we come out of this pandemic and as we build back. We need this protection not only from fear but from violence, including from excessive use of force that we have witnessed in many of our countries during the pandemic, and also protection from the conditions that have stripped thousands of African people of their dignity on a daily basis[…].”
The four new commissioners were later able to introduce themselves to each other and the public at large.

As she assumed her office as commissioner, Hon. Amesbury noted that, for the first time, Seychelles has a voice on an international body and highlighted that this is most significant since this happened on the country’s National Day.

“But, more importantly, today there is a world pandemic and what we are seeing is an awakening of the world’s consciousness: Black Lives Matter, Africa matters. And to me and our Charter, African lives matter,” Hon. Amesbury said.

“For centuries, Africa and African people have delivered to the world whether it was in terms of national resources and today our rights need to be recognised. Today we need the help of the world because of this pandemic; we need health care, we need food, we need shelter.”

The induction programme for the new commissioners commenced immediately after the swearing ceremony and will end tomorrow, after which the commission will resume its public sessions.

It was in February this year that Mrs Amesbury was elected to the African Commission on Human and People’s Rights.

This was revealed through a communiqué issued by the Office of the President and dated February 7, 2020.

According to the communiqué, Mrs Amesbury’s candidature had been endorsed by the government of Seychelles and President Danny Faure had already conveyed his congratulations to the powerful force, who in the past challenged the decision to reject her application for a post on the national Human Rights Commission on the grounds that she was not eligible as she was a member of a political party, and she was still not accepted after resigning from her position.