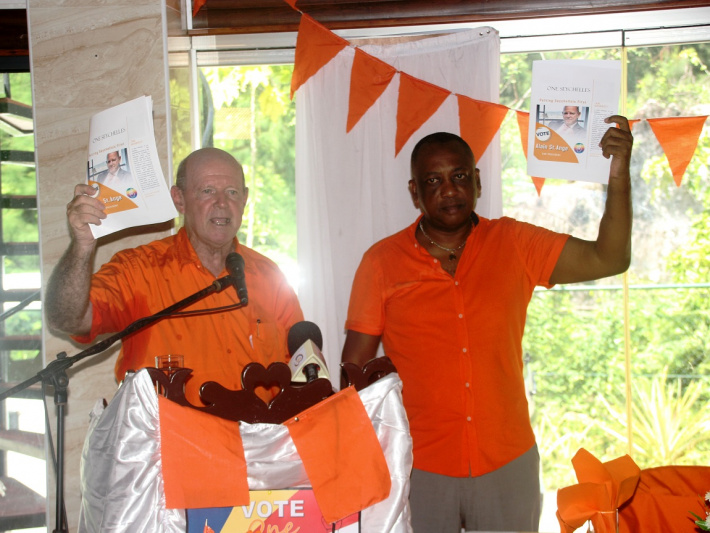 Alain St Ange will stand as One Seychelles’ presidential candidate in the upcoming election, with Peter Sinon as his running mate.

This was officially announced at the party’s National Convention held on Saturday at the Eve Island restaurant on Praslin.

“We believe in change that will make a significant difference in the lives of Seychellois,” Mr St Ange said in his address to the gathering who included party followers from Mahé as well as from the inner islands.

He shared his aspirations for the people and the party and touched pertinent issues such as the effects of COVID-19 on the Seychelles, the Blue Economy, education, food security, military, business taxes and the tourism industry. All the while acknowledging the need for One Seychelles to remain tolerant and respectful towards other parties in this political battle.

“We believe in democracy and are ready to face all opponents with maximum courtesy and respect. They are all Seychellois, all islanders, and therefore have the right to enroll as presidential candidates for the upcoming election. If only all the candidates had the same mindset, Seychellois could experience a unified nation. Therefore, let us show great respect to other candidates and their parties,” he said.

Mr St Ange noted that during their door to door visits on Praslin, inhabitants often shared their dissatisfaction towards the fact that the inner islands are mis-represented on a national level. Thus the reason why they decided to officially introduce their party’s presidential candidates on Praslin; both in the spirit of decentralisation as well as moving closer to the people who feel left out.

He also shared One Seychelles’ plan to have a ‘Minister for the Islands’ which shall be based at Grand Anse, Praslin, to help remedy this issue, if they are elected to power.

On his part, Mr Sinon thanked the attendees for their confidence in him being appointed as Mr St Ange’s running mate.

“Today, more than ever, I am more than ready to give my best to help rebuild the economy and preserve Seychelles’ accomplishments, independence, sovereignty, dignity and its people. This is with the aspiration of keeping the Seychelles people at the forefront in their own country. All our islands and all Seychellois are important and they should all be treasured especially when it comes to representation, opportunities to voice out their opinions, have their efforts recognised as well as their contribution to our economy valued,” Mr Sinon shared.

The party’s manifesto entitled ‘Putting Seychellois First’ was also unveiled. This depicts a summary of the party’s extensive and comprehensive plan for Seychelles, if it is elected.

One Seychelles intends to build a government of National Unity, a strong economy, a more sustainable tourism industry, thriving fisheries and agriculture sectors, a significantly lower cost of living and a nation free of discrimination and institutional corruption. A manisfesto which the party describes as one which shall give value to all Seychellois and a voice to the youth.

The convention also coincided with the launch of ‘Zilwa’, a magazine which aims to disseminate the party’s political news. Edited by Mr St Ange himself, the first edition of the publication which shall be published every Friday, was distributed for free to attendees at the event. 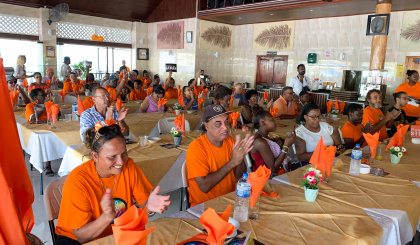 A partial view of the attendees