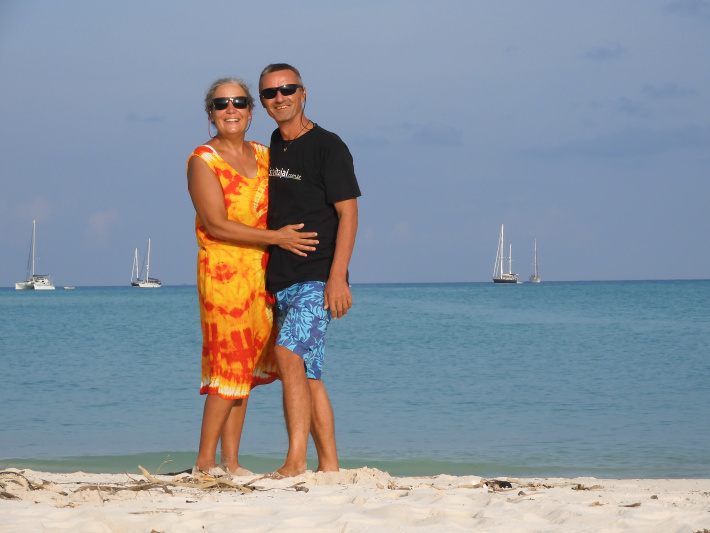 The couple enjoying a happy moment

Janneke and Wietze Vanderlaan Kuysters, a Dutch couple who spend their time travelling the world were allowed to sail into Seychelles’ waters a week ago after spending 102 days in isolation on their sailboat ‘Anna Caroline’ in the Maldives due to the COVID-19 pandemic restrictions on people’s movement.

Earlier this week the couple told Seychelles NATION how happy and grateful they are to have been allowed in Seychelles after weeks stuck on their boat and not being allowed to disembark and take a walk on firm ground.

“Every day when I wake up here in Seychelles, my heart is filled with joy and gratefulness that we are here,” Janneke says with a smile.

I met the couple for coffee at Eden Plaza Mall not far from the Eden Marina where their boat is moored.

Pointing at her cup of cappuccino, Janneke said: “Look, just to sit and have coffee feels like a grand party to me. We’ve had a tough time and I can’t stop saying thank you and being grateful to the good people of Seychelles to let us in.”

Background of the couple

The couple’s story started quite a long time ago, when they left their home country – the Netherlands – on their own sailboat. Sailing around the world is their lifelong dream and they saved all their money to make this dream come true. For many years, they sailed to different countries to learn about their culture, their people and their history.

“It was a very happy time for us,” her husband Wietze added.

They are part of a fleet of thousands of private boat owners doing the same thing: these ‘cruisers’ as they are called, quietly sail around the world. “When we were in Thailand in early January, we heard of COVID-19, but it was something that happened in China,” Janneke recalled. “We sailed from Thailand to Sri Lanka and there we followed the news and found out that it had started to spread. But we weren’t alarmed, because it hadn’t reached the countries where we were planning to go,” she remarked.

Wietze added that “this year, we are trying to get across the Indian Ocean to the Atlantic Ocean by going round the Cape of Good Hope.”

“When we left Sri Lanka in March to sail to the Maldives, all was OK. While we spent a week at sea, everything changed. Countries went into lockdown, borders were closed as a reslt of a worldwide pandemic. We were lucky that the Maldivian border wasn’t closed and that we had a safe place to anchor. The thought of being sent back to sea with literally nowhere to go was frightening.” We had already quarantined for a week at sea, so we thought it was normal to go through another week of quarantine at anchorage. But the Maldivian government wanted to keep us in isolation. We were never allowed on shore and in the first weeks we were not allowed to socialise with people on other boats too. This was really tough, because our boat is not very big,” Janneke explained.

Wietze laughed and said “just try to imagine being locked in your kitchen with your family for a few weeks on end.”

I dare not think about that.

When the ordeals started…

“The weeks passed in the sweltering heat. When we were finally allowed to socialise, most of us had already spent a month in quarantine. Our agent was the only one who could come near our boats for fuel, water and food. We completely had to rely on him. They forced us to remain all the way in the north of Maldives near a small village. We were at the end of the food supply lines. In short, there wasn’t a lot of fresh food available for us to buy there,” Wietze explained.

Janneke added that “on cruising yachts, there is usually a few months’ worth of tinned food, flour and yeast available. Some boats have freezers where they store meat. But it was tough trying to eat healthy and to keep yourself motivated during this really challenging time. Most of the cruising boats have only a couple on them, like ours. But there were three boats with children: one with three children and two with two children. Those seven children and their parents had our full admiration: it must have been so hard to do all the homeschooling work, keep the boat going, try to eat healthy and stay sane. Being a mother myself, I cannot imagine the strength of these people. I admired them too.”

Janneke recounted that when the south east monsoon started, the anchorage soon became untenable. The government didn’t understand the predicament that the 15 anchored yachts found themselves in: anchored in bad weather on a lee shore, fearing the loss of their yachts on the reef. Finally, permission was granted to move five miles to another anchorage with slightly better protection.

“And then we were really lucky as there was a small uninhabited island close by. We were granted permission to walk on the beach. For over two months we hadn’t been able to walk on land, so this was really nice. We gathered with all the cruisers on the beach and made a bonfire that night,” Janneke recounted.

But their luck was not going to last as very bad weather reached the anchorage in the wake of cyclone Amphan.

“For a week, we sat on our boat with fear of losing her in the huge waves and strong winds. In our little community of sailboats, three were affected by lightning strikes. It was terrible,” Janneke remembered.

She said slowly, the Maldivian government started to give permission to cruisers to sail further south to the capital Malé.

“There we had better access to food,” Janneke explained pointing out that even still everything had to be brought out to them because they were still banned from going ashore.

“To be honest, we didn’t want to go ashore because we were afraid of the COVID-19 infections there.”

Seychelles was the only hope…

When I asked them what kept them going, both of them smiled and said: “Seychelles”.

“The government of Seychelles had announced that the border would open for yachts from June 1, and that conditions apply. We waited patiently for news about the conditions. Every day we looked at the excellent website and Facebook page of the department of health if there was any news. Our Honorary Consul, Irina Udwadia, was most helpful. We were in touch via email almost every day and she kept us going with information and her descriptions of Seychelles. We dreamt about the beautiful islands and the friendly people," Janneke explained.

“And then it all went very quick. Once the form was available online, we filled it out and sent it in as fast as we could. Within 48 hours we had the approval! It was on Janneke’s birthday, we’ll never forget that,” Wietze said excitedly.

“Best birthday present ever,” said Janneke laughing. One of the conditions was that 14 days needed to have elapsed between departure from the Maldives and arrival in Seychelles but the two had quarantined while at sea. They took their temperatures every day, another precaution for arriving with a clean bill of health.

“During the crossing, we studied the tourist guide of Seychelles and tried to learn some Creole. “Mon kapab koz Creole zis enpe,” Janneke said with a smile.

“You have no idea how we felt when we saw the green hills of Mahé in the distance on the morning of our arrival,” Wietze told me. He said on that day they had been in isolation for 102 days. It is hard to imagine the length of their ordeal. Immediately after entering the coastal waters of Seychelles, they were met by a coastguard vessel and their details were recorded. Then they proceeded to the quarantine anchorage where they waited for another 12 hours until a health officer could come on board to check their health. Then the ‘all clear’ was given and they pulled up anchor to moor in Eden Island Marina. Keith, the manager, was there to welcome them.

“I almost cried when I stepped on the dock and walked between other people. Can you imagine how we felt to go into the supermarket?” asked Janneke. “Right that night we went out for dinner at Bravo. We looked like fools because we had missed all the rules that everybody has to adhere to with the social distancing, logging your name and number and using the hand sanitiser. Lara was super patient with us and explained it all. We felt like royalty just sitting in a restaurant and having the best dinner ever. We finally got to celebrate Janneke’s birthday,” Wietze said laughing.

The couple have unpacked their bikes and have gone out exploring Mahé in the week they have been here. “It is so beautiful here and the people are so friendly,” said Janneke.

“The occupants of the other 12 cruising boats that are here are all happy and grateful to be safe and welcomed here. Such a joy after the tough times we had. Thank you Seychellois!” Wietze added.

Their predicament in the Maldives has taken its physical toll on them: they both lost a lot of weight and are anemic because of the limited diet.

“But a quick health scan by the good doctors of Panafricare helped us on our way to recovery,” Janneke reassured me.

We ended our interview with my last question about their next destination. “Madagascar,” Wietze replied.

“But their borders are still closed. We have to wait for the southerly winds to ease a little, so by September we hope to be able to go there then on to South Africa in October and November. In July next year we plan to be back home in the Netherlands again after eight years of sailing”, Wietze explained.

“But first let us enjoy Seychelles,” said Janneke with a joyful smile.

The accompanying photo show the couple on board their board and ashore. 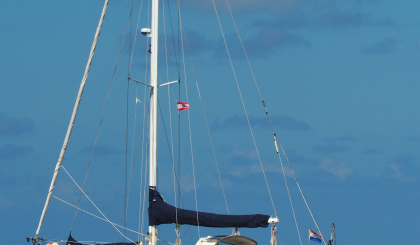