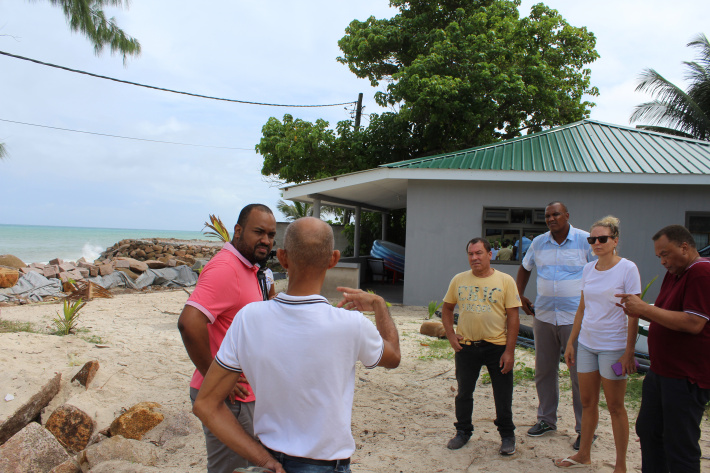 Seychelles has been experiencing excessive high tides of up to 2.2 metres since the beginning of the year and these have affected coastal areas around the country, leading to severe erosion and the island of Praslin has not been spared.

On Thursday last week, Environment, Energy and Climate Change Minister Wallace Cosgrow visited the second largest island to see firsthand the damages the waves have caused to coastal areas, to public infrastructures as well as private properties near the coast and apprised of the different projects being carried out by his ministry to mitigate the impact of the waves.

The impact of coastal erosion is very prominent at Anse Kerlan opposite the airport where the road is being severely affected. The foundation of the Seychelles Trading Company (STC) depot has been partly damaged and exposed due to severe erosion which is apparent all along this part of the coastal area.

The Cabinet of Ministers recently approved for the ministry to carry out a mitigation project at this site to protect this part of the coast.

“After various discussions and interactions with the district council, government has released funding to start the project which will be in the area where the Seychelles Land Transport Agency (SLTA) had already started a rock armoring project. The environment armouring project will be 150 metres long and it will protect the road network and other infrastructures in this area. I believe that when completed the coastal areas will be more secure and better protected from the force of the waves,” said Minister Cosgrow.

The work is due to start once the environment ministry finalises the tender process.

Minister Cosgrow also visited several drainage projects being implemented by his ministry at Saint Joseph and Lablache Estate. He was pleased with the progress made and reaffirmed the government's support and commitment to allocate the necessary funds for their completion.

Minister Cosgrow also had the opportunity to visit a site at Anse Kerlan where Avangard, a non-governmental organisation, did some intervention work to protect part of the coastline where the livelihoods and properties of some inhabitants living near the coast were being endangered. The minister was greeted by the secretary of the organisation Natalie Dubuisson.

“As a result of climate change with sea level rise, we have lost more than 40 metres of land. We decided to try and protect the coast. We intend to finish this project at Anse Kerlan provided we receive financial assistance,” said Ms Dubuisson.

Other members of the organisation who were in attendance had the opportunity to show Minister Cosgrow the work they have done to protect their homes and the other people in the community. Avangard submitted a request to the Environment Trust Fund (ETF) to complete the project.

The accompanying show Mr Cosgrow and his delegation during the visits. 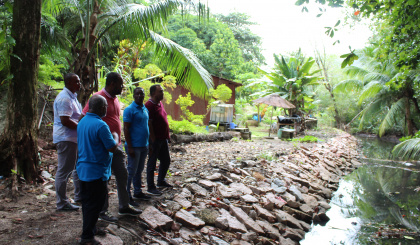 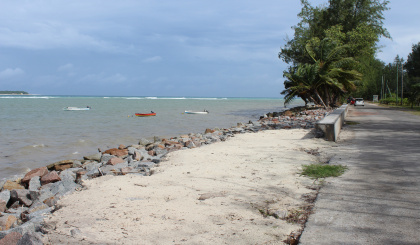 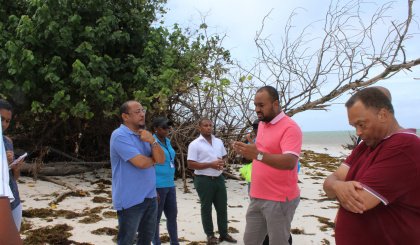 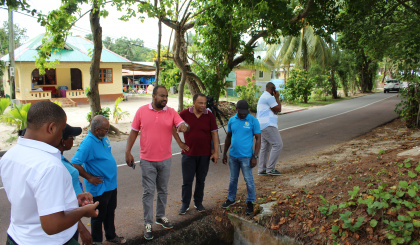