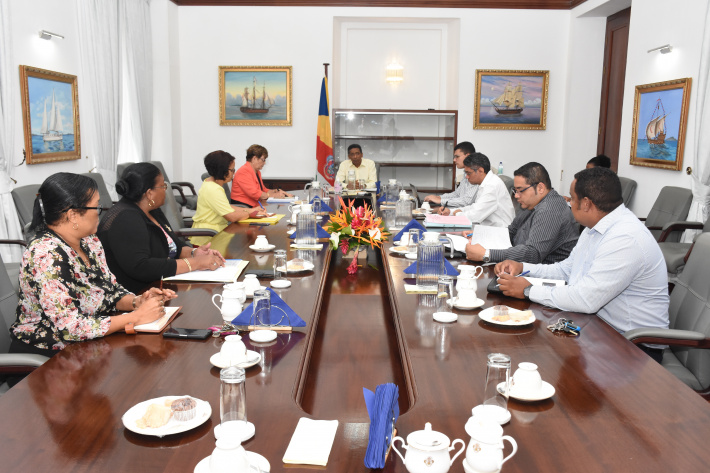 The rapid response team briefed President Faure on the progress they have made during the first six months dealing with the effects of COVID-19 on the economy (Photo: Jude Morel)

Members of the rapid response team briefed President Danny Faure on the progress they have made during the first six months dealing with the effects of COVID-19 on the economy.

Speaking to the press after the meeting, Messrs Laurence and Simeon noted that the objective of the meeting was to brief the president on what the rapid response team has been doing these past six months and what steps they will be taking for the months ahead.

“The impact of COVID-19 on the economy will be much worse than the virus, we will start seeing its true form in the coming months and we briefed the president on the increase in the number of people benefiting from welfare since we were first hit by the pandemic,” said Mr Simeon.

He noted that over 3,000 people who have lost their revenue are those who were working in the informal sector and who had not registered their business and could not benefit from the financial assistance for job retention (FA4JR) plan.

People who do not fall under the structure that has been placed by the government such as Seychelles Employee Transition Scheme (Sets) and FA4JR will be able to earn a benefit from the social protection department, those will include students, graduates and people whose salaries have been cut.

“We are living in the new normal and will have to adapt to it. This meeting is to put in place strategies to help with that,” Mr Simeon added.

The Unemployment Relief Scheme was also discussed during the meeting with the president. Mr Simeon noted that they have updated the scheme in order to increase the amount of money that a person was getting.

As from July, people filing unemployment with justifiable reason will get an increase from R3,900 to R5,800. The department of employment will also try to place them in employment.

Another point highlighted by Mr Simeon is that next week the cabinet of ministers will be discussing strategies concerning housing projects for vulnerable families and unemployment.

“Concerning housing projects we will have to reprioritise some cases and we have to make sure that families that are really struggling are the first to benefit,” said Mr Simeon.

By the end of June the dynamic has changed, there are so many people who have a salary but are unable to get their necessities as their salaries have decreased significantly.

On his part, PS Laurence said that for the past three months they have analysed the situation in the country and have found that the standard of living for many people has gone down significantly due to them losing their job or income.

“The situation has stabilised for now due to the assistance that the government has been providing but families are still facing many difficulties and this is why we have to find a proper structure to capture these families and give them the help they need,” PS Laurence said.

He noted that recently they met with the Central Bank of Seychelles (CBS) and they were made aware that many people have at some point in time taken out personal loans which they cannot pay back now.

“It is important that customers who have taken out a loan and do not have the necessary funds to pay them back negotiate with their banks and find a middle ground. The government has been talking to the CBS on this matter, but it is important that members of the public take it upon themselves as well,” added PS Laurence.

He also noted that there are a lot of landlords who have taken this opportunity to increase rent which has led to families losing their home. This puts pressure on the government as there is already a big number of people in need of help.

“It is in times like this that we need to pull together and help each other, those who have the means and the funds should lend a helping hand to those who don’t. Those who are also getting assistance from the government should use the money wisely and not spend it on frivolous things,” continued PS Laurence.

Sensitising the people on the serious economic impact that the virus is causing was another point raised during the press conference, as we have seen in past few months that many people have been taking advantages of the discounts hotels and guest houses have been offering. However, Seychellois need to start saving as the next six months ahead are going to be difficult.