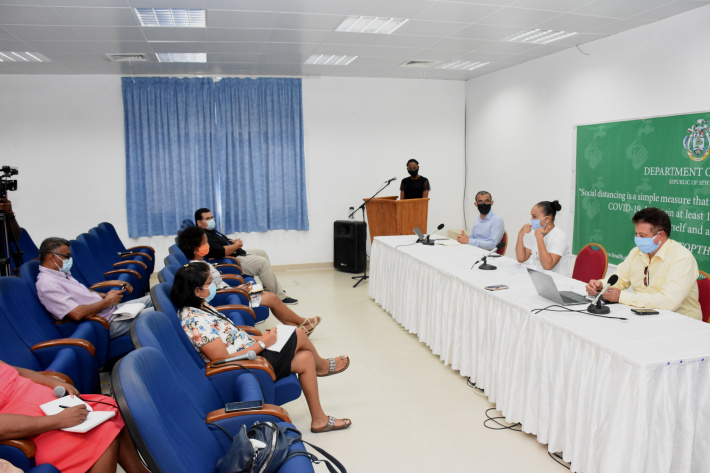 Seychelles still has 86 positive cases of COVID-19 and the patients – six Seychellois and 80 West African seafarers – are either in the isolation centres or on their boats. Tests carried out on the close family members and co-workers of the six Seychellois have come back negative, public health commissioner Dr Jude Gedeon said yesterday afternoon while updating the press on the situation at the Sheikh Khalifa diagnostic centre.

“As of Wednesday evening, we conducted a contact tracing exercise of all the close relatives and co-workers of the six positive patients. We are in the process of admitting these people into quarantine and the people who had a remote contact with these people will be put under active surveillance. Since Wednesday we have run some 200 tests but no new cases have been detected. Even the test on a bank staff in town came out negative. Amongst these tests also include those who have completed their quarantine,” Dr Gedeon explained.

Furthermore, Dr Gedeon stressed that contact tracing is not an easy exercise and on top of that a lot of information is being circulated on social media and a newspaper stating that the department of health is not speaking the truth.

“I would like to assure the public that we do not have any intention to lie to them and we release information that we have at the time of the press conferences. Our surveillance team had the information prior to the press conference and with further investigation we found out that the people concerned were not necessarily on duty on that day! So they must have contracted the virus at a different time,” Dr Gedeon pointed out.

He said they worked closely with the mariners but they were not on the radar at the time when the previous cases were detected but while doing surveillance on the boats, these individuals voluntarily asked for a test and they were found positive.

“They must have information that we do not have at this point,” Dr Gedeon remarked, noting that the six individuals in question are baggage handlers, drivers and handy men. He said the department of health is still conducting an investigation to trace the infection point.

On Thursday evening, there were still 12 tests that were being done. “Regarding the mariners, sampling has started on Wednesday as announced and will continue till today, Friday. Lab tests started on Thursday night and will continue during the weekend. So far, I would like to emphasise that the mariners who tested positive are doing OK, except for one who is hospitalised but is recuperating well. All of them are asymptomatic,” said Dr Gedeon.

“On Wednesday, we discharged some of the people who were on quarantine in order to have space for the people who were in contact with the positive patients. All the patients have to follow a strict procedure at home to complete their quarantine. On Wednesday, we admitted 22 people who had close contacts with the six persons. Our team is also working on the procedures to admit the co-workers and other contacts,” Dr Louange stated.

He further said that there are also 21 people at the South East island facility and provisions are also being made to free these rooms after proper tests have been conducted on the patients. The procedures will continue at home though. There are still seven people in isolation – six Seychellois and one mariner. All the people on quarantine at home are doing OK so far,” noted Dr Louange.

Dr Gedeon has reassured the population in particular parents that there is no need to panic and to stop entertaining and listening to rumors going around that there was a child who had been infected.

“There is no need to make assumption too early. It is still early as no child has infected other children yet. Please check the source of your information as all schools have been equipped to deal with a suspected case. If there are any cases of infection amongst children, then we will review our decision. We are following this situation very closely,” said Dr Gedeon.

He said the more disinformation we have around, the more confusion this will create among the population.

“We all have to make sacrifices and make efforts to help our country. We must all practice good hygiene, wear masks and avoid crowded areas to break the chain of transmission if there is ever a case of community transmission. COVID-19 is everywhere and we are not COVID-19 free. We need the press to help us inform the public correctly,” concluded Dr Gedeon.

Earlier, he had congratulated all journalists and cameramen present as they were all wearing masks.