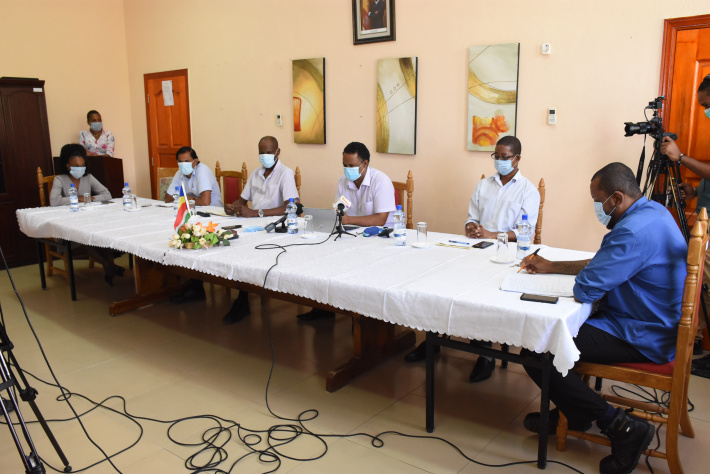 The press conference in full swing

Most sports disciplines set for ‘new normal’ resumption next week

Following the suspension of all local sports activities on March 17, 2020 as part of the safety precautions against the coronavirus (COVID-19), it has been announced that mostly all sports disciplines will resume next week under strict rules and guidance.

The decision to halt all sports-related activities was taken by the National Sports Council (NSC) in line with the to-do list of the department of health regarding the COVID-19, advising that organisers of large public gatherings, including sports events cancel, or postpone their events until further notice.

In a press conference yesterday at the NSC boardroom at Stad Linite, NSC chief executive Jean Larue explained that the decision to resume local sports activities has been taken in conjunction with all stakeholders, including the department of health and all local sports federations and associations as a gradual process.

Preparations for the resumption included education of the athletes and other personnel, assessment of the sport environment and agreement on training scheduling to accommodate social distancing and also hygiene and safety of the different venues.

Prior to resumption, sporting organisations must have agreed protocols in place for management of illness in athletes and other personnel.

In his introduction, Mr Larue noted that sports make an important contribution to the physical, psychological and emotional well-being of the Seychellois society and that the resumption of sports can significantly contribute to the re-establishment of normality in the society.

He however explained that based on the health urgency and priority during COVID-19, a substantial amount of money – R17.051 million – was taken from the NSC budget, affecting the preparations for international competitions such as the Zwe Lespwar Sesel, the Olympic Games, the Marathon Swim World Series (MSWS) and also the allowances paid to high level athletes.

Mr Larue added that an additional R8 million was deducted, this time affecting renovation projects, including the Roche Caïman swimming pool, the Palais des Sports, facilities on Praslin and Anse Royale and also renovation work on the medical unit of the NSC.

He also added that the safety and well-being of the Seychelles community remain a priority.

Also present at yesterday’s press conference were the principal secretary for youth and sports Fabian Palmyre, president of the Seychelles Olympic and Commonwealth Games Association (Socga) Antonio Gopal, project manager at the NSC Denis Cesar who is also in charge of health and safety, the director general within the local government department Daniel Adeline along with racket sports representative and also the chairperson of the Seychelles Tennis Association Fatime Kanté.

On behalf of Socga, Mr Gopal explained that despite the postponement of the Olympic Games, the allocated funds to athletes and sports federations are still available and it will be up to the local sports governing bodies to come up with their strategic plans on how to invest and benefit from the funding.

Regarding the state of infrastructures and facilities, Mr Adeline explained that most of the expenses go into unnecessary renovation costs due to vandalism and negligence.

He urged all those who use the community facilities in the districts to be more responsible, thus helping to minimise costs, especially in the present difficult time.

A pertinent question raised at yesterday’s press conference was in relation to the Maison Football, the headquarters of the Seychelles Football Federation (SFF), which was handed over to the department of health and the rapid response unit of the department of risk and disaster management (DRDM) as quarantine facility during the first cases of COVID-19 locally.

With the resumption of local football last week, NSC boss Larue and principal secretary for youth and sports Palmyre said they are unaware that SFF staff are back into the building, running local football while it is still being used as a medical facility, precisely in the field of COVID-19.

Sports NATION contacted the secretary general of the SFF Georges Bibi who explained that the local football body is an independent entity with its own statutes and constitution.

It is to note that on the day of handing over, Mr Bibi explained that due to the fact that they were asked to evacuate the building after the handing over, it was believed that the place was to be used as an isolation facility since it is well equipped with individual rooms, all with their own bathroom facilities, while the SFF staff worked from home.

On Thursday March 19, the department of health stated on its website that “Additionally, the Maison Football building will now be used as an additional facility to quarantine incoming Seychellois passengers. The building, located at Roche Caïman, has a capacity of 12 rooms.”

To date, it has not been made public that the building is no longer a quarantine facility and that it has been handed back to the SFF for normal business.

In such a situation, one would surely ask how local football can be conducted in an official quarantine facility without the knowledge of the authorities.

It is also important to note that since Monday this week, most of the COVID-19 tests are being carried out at the facility, including the six positive cases.

Has the department of health given the green light for the SFF to use the building?

How can tests be carried out in an area where it is business as usual, putting at risk the life of staff members?

In his explanation, Mr Bibi noted that the Maison Football is not a government building and that the SFF was lending it in good faith as its contribution to the health of the country.

He also explained that those being tested do not have access to SFF staff as they do not use the main entrance to get upstairs where the tests are being carried out.

To note, quarantine is the separation and restriction of movement or activities of persons who are not ill but who are believed to have been exposed to infection, for the purpose of preventing transmission of diseases. 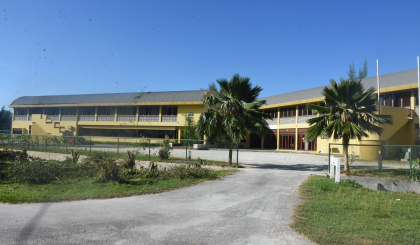