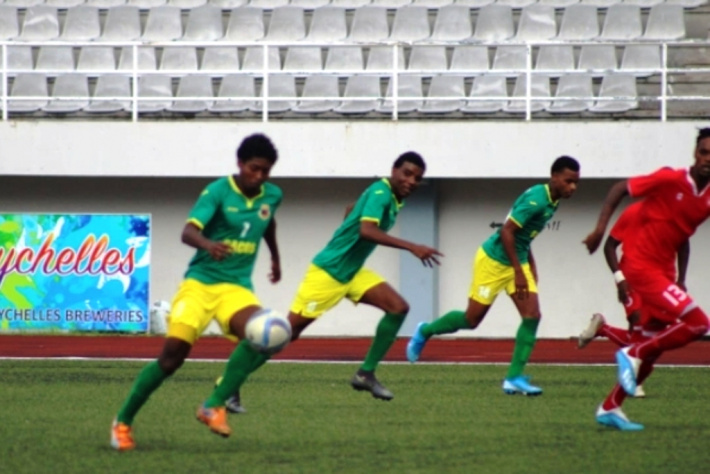 La Passe had to come from behind to edge their bitter rivals Anse Reunion 4-3 at the L’Union playing field in a seven-goal thriller on Saturday afternoon in a SeyPearl Premier League match to climb into third position in the standings.

Anse Reunion went ahead in the 11th minute courtesy of a strike by Achille Henriette but La Passe drew level a minute later as Anse Reunion defender Don Fanchette inadvertently scored in his own net to make it 1-1.

However, Anse Reunion restored their lead as Malagasy striker Iavo scored in the 13th minute for a 2-1 advantage.

But the players of coach Bruno Saindini equalised in the 22nd minute from young forward Assad Abdou for a 2-2 score and then Malagasy Florent gave La Passe the lead on the stroke of half-time for a 3-2 scoreline at the interval.

Assad Abdou bagged his brace as he netted again in the 68th minute to make it 4-2 for La Passe but Anse Reunion cut the deficit in the 75th minute as Iavo also grabbed his brace for a 4-3 score and Stenio Ernesta had some clear chances to at least level the score but he was guilty of some bad misses as La Passe held on to collect three points which put them on 41 points, the same total as defending league champions Côte d’Or whose away match against St Louis on Saturday was postponed due to a water-logged pitch at Stad Linite.

La Passe coach Saindini told Sports NATION that his team took things too easy and he was just relieved they managed to secure all three points.

“We should have won this match more convincingly but we took things too easy and gave away some sloppy goals through lack of concentration though it was vital to collect all three points which have helped us to improve our position in the league,” La Passe coach Saindini related to Sports NATION.

As for Anse Reunion coach Basil Hoareau, he was very disappointed that his team lost this match which they dominated for long periods but left empty-handed.

“We made a bright start but then allowed our opponents to get straight back in the match as we lost our focus and we fought hard in the second period and had enough chances to claim at least a point but we wasted some gilt-edge opportunities. This is quite disappointing but we also have not had any test matches before the restart of the season and the players were a bit rusty,” coach Hoareau explained to Sports NATION.