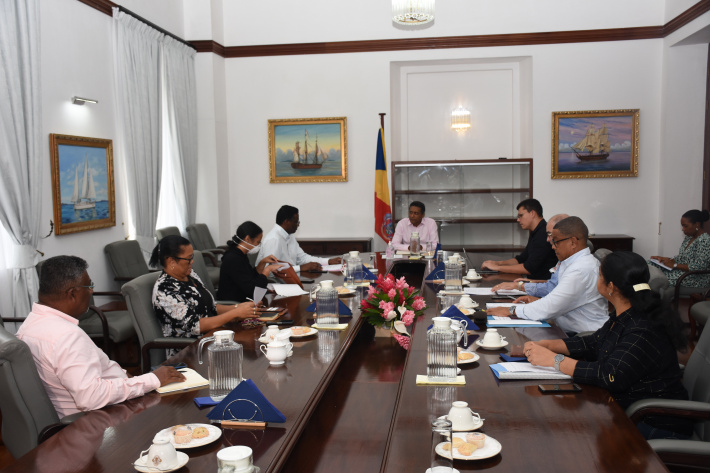 The high level committee for food surveillance security has been tasked to ensure that whatever is imported does go towards food security in the country.

The committee set up to discuss and harmonise the country’s food security in relation to availability of sufficient stock in the wake of the coronavirus (COVID-19) pandemic, has been meeting regularly at State House to discuss food security issues.

It was the Minister for Fisheries and Agriculture and also chairman of the committee, Charles Bastienne, who made the statement following the committee’s meeting with President Danny at State House yesterday afternoon. He said they reviewed what has been done regarding food surveillance security since they first met in the first week of March 2020.

“This is a new mandate, a new strategy and approach that myself and the committee are to strategise on to make sure that we do our very best to protect the foreign exchange reserves of the country,” Minister Bastienne said, noting that the country’s foreign exchange earnings have reduced to US $600,000 from US $3 million per day.

He further said that the committee will be working closely with government ministries, agencies and the private sector to come up with the best model for the importation of basic products in relation to food surveillance security, while looking closely at whether other goods to be imported are necessary. He added that the committee will be working with local producers to increase local production and reduce the pressure on the foreign exchange reserve.

Minister Bastienne added that four months since the first evaluation of food security in the country in the wake of the COVID-19, it is still on solid footing. He claimed that the Seychelles Trading Company (STC) has been able to increase most of its essential products from three months to six months as required by government and the Seychelles Petroleum Company (Seypec) has a stock of fuel and gas.

He said that since the committee was formed and met with President Faure in a first meeting on March 23, 2020, they have since met 11 times to discuss constraints and targets set by STC and Seypec as well as other sectors.

Minister Bastienne added that at the beginning of COVID-19 outbreak, there was a significant hike in the price of commodities and the committee had to seek the help of the Fair Trading Commission (FTC) which concluded that the majority of the price increases were related to the depreciation of the rupee against foreign exchange and to some extent artificial pricing.

He said that FTC is working with the Retailers Association to deal with merchants who are not playing fair in this time of crisis.

Meanwhile, Minister Bastienne also stated that the emergency plan for the fisheries sector is going fairly well, though not at 100% as expected. He noted that 100 tons of fish have been sold during the pandemic period by local fishermen to fish processors, but only 35 to 40% of fish have reached the stores at STC. Therefore, the Seychelles Fishing Authority (SFA) is working to make sure that the majority of fish sold to fish processors arrive on the market.

With regards to agriculture, he said government provided subventions to the sector so as to maintain the price of production and stock on sale at the stores, the same as before the start of the pandemic. He also said the high level committee has worked with Air Seychelles to reduce air airfreights to prevent increases on imported commodities by air.

“We have finished with the first phase of our work and we have to continue to work on it by making sure we monitor our stocks so that the country do not fall short of basic food commodities,” he said, noting that in this time of the pandemic, food security takes precedence over other commodities.

“If we continue to bleed our foreign reserves, it will have a severe impact on our food security,” Minister Bastienne said. He went on to add that it was the committee which called for the list of STC basic products to be extended from 14 to 20 items.

President Faure urges world leaders to eliminate the use of nuclear weapons | 05.10.2020