Representatives of the local media and other media practitioners have received a clear overview of the country’s economic and financial situations in the wake of the downturn caused by the COVID-19 pandemic.

The high level economic committee established to address the impact of COVID-19 met with media representatives yesterday morning at the STC conference room to provide them with a clearer picture of the country’s present situation.

These three presentations focused on the state of the economy presently and the post-COVID outlook.

President Faure explained that it is important for journalists to gain a better grasp of the current state of affairs so as to better inform their audience.

It was stressed that even though our air space is scheduled to reopen for commercial international flights on August 1 and tourism predicted to rebound in 2021, the economy will recover at a very slow pace.

This takes into account the uncertainty surrounding the pandemic, the global economy which is in a recession and Seychelles’ key tourism markets – United Kingdom (UK), Germany, France and Italy – that are also attempting to manage the recession.

PS Agathine noted that Seychelles’ gross domestic product (GDP) will only reach the same level as seen in 2019 as of 2025 onwards.

With the tourism sector contributing around 25% to real GDP, more than any other sector, the sector was expected to remain the main contributor in 2020 with a forecasted 5% growth.

Growth in 2020 was also expected to remain positive at a 3.5% increase. This, however, will not be the case for post-COVID 2020 as the global outlook average stands at -5%.

Since Seychelles revised its budget in April 2020 to add a R1.2 billion in expenditures, it expects to see an unprecedented primary deficit.

Adding on the external and domestic debts the country is accumulating, PS Thésée highlighted that the entire country will have to get involved in placing the economy back on track and paying our debt.

“Generally we expect 64% decrease in tourist arrivals for 2020 but this projection might worsen if things do not go back to normal as from October,” PS Thésée said yesterday.

Journalists and editors were also made aware of the fact that the Central Bank of Seychelles (CBS) has started printing money and injecting it into the financial system to mitigate some of the issues caused as the economy goes on the downslide.

Governor Caroline Abel noted that printing more money does not increase economic output, it only increases the amount of cash circulating in the economy and can lead to further inflation, which is why CBS is being prudent.

She explained that CBS has put in mechanisms to ‘mop up’ excess money in the economy, an exercise which it undertakes twice a week.

In regards to the R500 million credit facility which CBS has put in place for struggling businesses, Governor Abel revealed that commercial banks have accessed R18 million so far to pass on to their customers.

Discussions on extending moratorium on bank loans are also ongoing with a number of commercial banks, Governor Abel later added during the question and answer part of yesterday’s meeting.

To underscore the striking difference between the economic state of affairs in the first quarter of 2020 compared to the second quarter onwards, ASP provided R4.1 million in January for its welfare programme, R4.3 million in February and R4.6 million in March but the payment surged in April to reach R7.5 million. Welfare payments kept on increasing in May (R12.5 million) and in June (R15.2 million).

Following the meeting, SS Payet stated that the committee was satisfied with the turnout and the quality of questions that journalists put forward.

“We wanted to meet with the media to provide them with information on our situation pre-COVID, how it has changed over the last three months and the new forecasts, and get their views. Journalists can also better pass on these information since they meet with people daily,” SS Payet expressed.

SS Payet also spoke of the advantages of the arrival of some 400 odd Emiratis whom President Faure yesterday confirmed will be arriving in Seychelles. SS Payet noted that they expect to bring in some well-needed foreign exchange into the country.

President Faure stated that these individuals from the United Arab Emirates (UAE) are flying in “soon” via a private flight and will be paying heed to all the measures in place given that Seychelles is still in a health emergency.

“They have chosen to take up accommodation in five hotels in south-west Mahe and if this model works, they will also encourage their people in the UAE to come to Seychelles instead of going elsewhere, and this will provide some financial benefits,” President Faure explained. 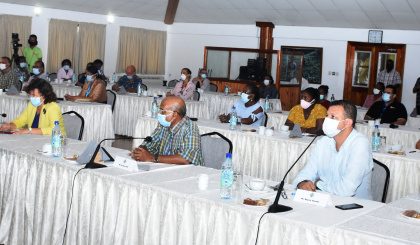