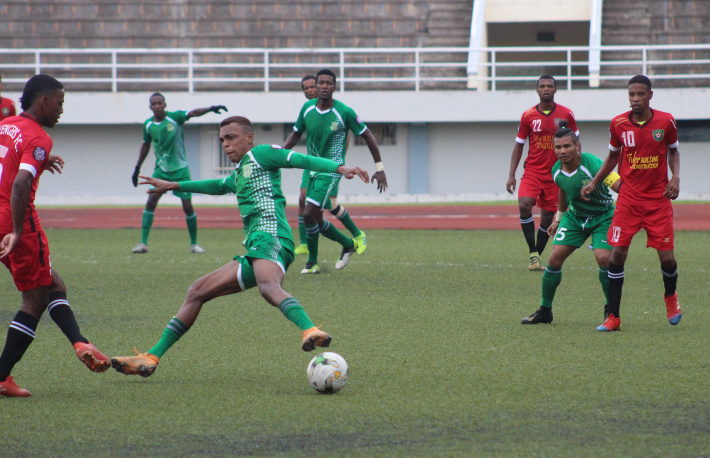 Foresters missed the chance to edge closer to their first league crown when they drew with Praslin outfit Revengers in a controversial 1-1 draw at Stad Linite on Saturday afternoon.

The onus was on the Mont Fleuri-based team to go in search of all the points as they went close in the 5th minute when Martin William found space on the edge of the penalty area to fire at Revengers goalkeeper and captain Gino Melanie who produced a brilliant flying save to push the ball into corner.

Seven minutes later, Brandon Labrosse played a neat one-two with captain for the day, Malagasy Jean Tigana before his shot sailed narrowly over the crossbar.

Foresters duly broke the deadlock in the 18th minute as Ryan Henriette picked up a long ball behind Revengers’ defence to shoot at goalkeeper Melanie who blocked his shot but Labrosse followed up to tuck the loose ball into an empty net to make it 1-0.

There was an element of controversy in the 23rd minute as the ball ran out of play but assistant referee Stephen Dugasse did not flag, allowing Tigana to bore down the line to link up with Labrosse who twisted and turned inside the Revengers defence as the ball came off a falling defender Francis Louise’s arm but referee Elderick Adelaide, who had a tough afternoon, failed to signal a penalty as the first half ended on a 1-0 score.

Revengers though stunned title-chasing Foresters in the 50th minute from Malagasy Herrod’s searching ball which was latched on to by Graig Cedras who beat goalkeeper Kitson Cecile to the ball to glance his header into an unguarded net for a 1-1 scoreline.

Foresters had to react as they pushed more men forward and in the 55th minute Henriette skipped past two defenders before he was brought down on the edge of the penalty area and referee Adelaide signaled the infringement but awarded a free kick as Foresters claimed for a penalty.

Nigerian Kazeem Adeyeri, who had a rather quiet game, curled the free kick onto the wall for a corner and Henriette floated the resulting corner which William should have headed home as he was unmarked inside the penalty area but the ball flew over the crossbar.

On the hour mark, Henriette weaved his way into the Revengers penalty area and the ball broke to Labrosse whose stinging shot was tipped over the crossbar by goalkeeper Melanie.

Two minutes later, Foresters went even closer as goalkeeper Melanie came out to collect a deep Brandon Molle cross which he missed and the ball fell to Elvin Estico who tried to hook it into the net but defender Antoine Charif headed the danger into corner.

Foresters were denied a good goal in the 66th minute from Adeyeri’s inswinging corner which was met by defender Warren Mellie’s towering header but goalkeeper Melanie just managed to keep the ball out though Henriette stabbed the loose ball into the net to make it 2-1 as he unintentionally collided with goalkeeper Melanie as he raced out to celebrate.

The Revengers goalkeeper and captain stayed on the ground as he had to receive treatment for almost five minutes while the Revengers players tried to convince the official that their goalkeeper had been fouled by Henriette.

After having awarded the goal, referee Adelaide decided to consult with his assistant Stephen Dugasse and amazingly when play resumed, the goal was controversially disallowed much to the disgust of the Foresters camp who tried to protest for having been cheated of a valid goal but it was to no avail.

As a result, Foresters had to maintain the pressure and Adeyeri should have done better with a clear chance in the 74th minute after being set up by captain Tigana but he delayed his shot and the threat was snuffed out.

Foresters had plenty of possession and huffed and puffed but failed to score again as they missed a great chance to open up a six-point gap on their closest rivals Côte d’Or who drew on Praslin.

Foresters coach Harold Hoareau was not happy with his team’s performance and also felt they were denied a good goal by the officials’ poor judgment.

“We are quite disappointed with our team’s performance and we did not apply ourselves in the correct way but were rather playing with fear. But we also scored a very good goal but it was wrongly disallowed by the official which is very incomprehensible and it may prove decisive this decision,” the Foresters coach told Sports NATION.

As for Revengers coach Neddy Rose, he was pleased with his team’s result in a match where he admitted they were second best for long periods.

“It was a good result as we showed a lot of combativity though our opponents were superior to us and may have been hard done by the official,” coach Rose said.

Côte d’Or manager André Bedier explained to Sports NATION that it was an interesting match though his team lacked patience in their build-up which cost them dearly as they failed to capitalise on Foresters’ draw to close the gap at the top of the league standings.

St Louis fought back from a two-goal deficit to share the spoils against Anse Reunion in a 2-2 draw at the L’Union playing field on La Digue on Saturday afternoon.

Anse Reunion, who had lost their previous two league matches, opened the scoring in the 34th minute through a deflected free kick by defender Don Fanchette for a 1-0 lead at half-time.

Home team Anse Reunion were awarded a spot kick in the 53rd minute when Mike Lesperance gave away a penalty which was awarded by referee Kerens Yocette and red hot Malagasy forward Iavo converted to make it 2-0.

However, St Louis bounced back as Karl Hall headed home in the 73rd minute for a 1-2 score before Malagasy Christophe was sent off for Anse Reunion in the 75th minute for two bookable offences.

St Louis made their one-man advantage count as they levelled matters in the 83rd minute courtesy of a sweet strike by Hubert Jean to make it 2-2. Malagasy Tahiry should have completed this remarkable comeback in added time but he wasted a glorious chance as the two teams shared the spoils.