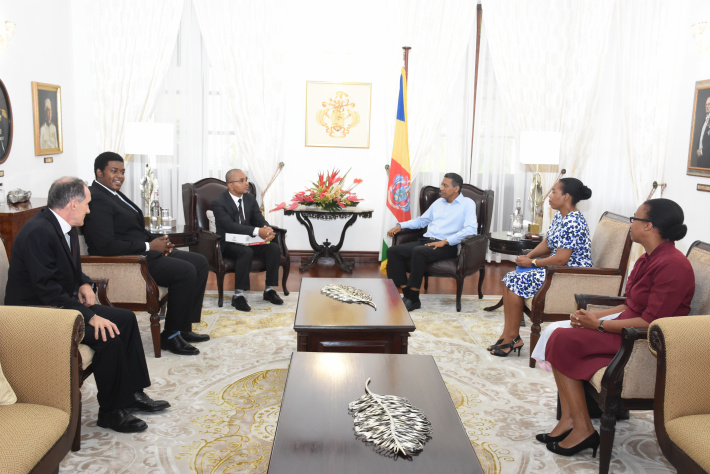 The delegation’s meeting with President Faure was to discuss the different plans that the Seventh-day Adventistof Seychelles want to put forward.

“Our focus is not only on the church or the bible, but also the wellbeing of society,” Pastor Mesmert told the press after meeting the president.

He also thanked the president for making the time to receive them at State House and conveyed the appreciation of the church for the continuous support from government and the consultative approach that exists between the church and government.

He continued by saying that the church has plans to open a rehabilitation centre that will provide support and help rehabilitate people suffering from drugs and alcohol abuse. The centre which is under construction is located at St Louis and it is expected to open to the public once it is ready.

Among the church’s future plans is the expansion of the outreach programme ‘Light House’ involving rehabilitation and counselling support.

The pastor also mentioned plans of building a new school that will be opento everyone.

“Our mission is to preach the gospel first and foremost, but we also focus on the needs of society and how we can help the community.”

According to a communiqué on the State House website, during discussions, President Faure reaffirmed government’s commitment to maintaining strong relations with the Seventh-day Adventist Church and thanked them on behalf of the people of Seychelles for their work targeted at communities in need and empowering citizens.

The Seventh-day Adventist (SDA) Church began its mission in Seychelles in 1930 and it currently has 1,200 members, six pastors and 11 churches.