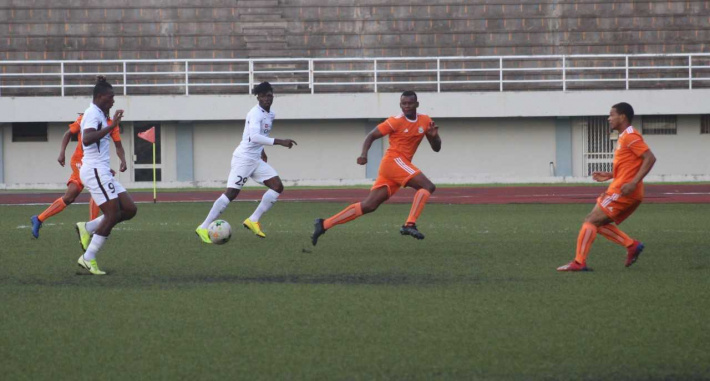 Côte d’Or had dropped points last weekend as they failed to close the gap on league leaders Foresters and therefore had to win this rescheduled encounter if they were to stand any chance of retaining their league crown.

However, St Louis, who also have a slim chance of winning the Holy Grail, had other ideas though they almost conceded in the 8th minute. Côte d’Or captain Collin Esther’s curling free kick was tipped over by St Louis goalkeeper Gino Pleureuse after defender Mike Lesperance had clumsily fouled Malagasy Kassah to receive a booking from referee Bernard Camille.

Lesperance then assisted his team to break the deadlock as he galloped forward to link up with Malagasy Tahiry in the 22nd minute who in turn released Nigerian striker Joseph James who burst through in the Côte d’Or penalty area before firing at goalkeeper Jean Paul Lesperance who spilled the shot and Hubert Jean was on hand to punish him and head home for a 1-0 lead.

Côte d’Or should have drawn level two minutes later when Malagasy Charles Rakoto played a short corner to Jones Joubert who floated the ball at the back post to captain Esther who had sneaked in behind the St Louis defence but the midfield playmaker shot straight into the gloves of a relieved goalkeeper Pleureuse.

In the 41st minute, St Louis had a decent opportunity to extend their advantage following a Côte d’Or defensive mistake as they gave the ball away to James who combined with Malagasy Georges Kalo who then threaded the ball to Tahiry who was in a good scoring position but he rifled over the crossbar for a 1-0 lead at half-time.

St Louis went further ahead in the 49th minute as a result of some quick thinking and poor defending by Côte d’Or from a short corner played by Tahiry to Collin Bibi who lofted the ball to the back post where Karl Hall headed it in the goalmouth and Joseph reacted the quickest to stab the ball past goalkeeper Lesperance for a 2-0 scoreline.

In the 51st minute, St Louis went to sleep at the back as they let in Malagasy Rakoto who shot at goalkeeper Pleureuse who did enough to push the ball into corner.

St Louis were lucky not to be penalised with a penalty by referee Camille in the 56th minute when the ball clearly came off the hand of Kalo as he tracked back to defend a Côte d’Or attack but the official waved play on as the Praslin outfit appealed for a penalty.

Kalo was involved in setting up St Louis’ third goal in the 65th minute when he released Danny Madeleine down the right and the defender’s teasing cross was initially missed by Joseph’s swing at the ball but he got a second bite of the cherry as he hooked the ball into the net with his back to goal to make it 3-0 despite goalkeeper Lesperance getting a touch of the ball.

A minute later, Madeleine bore forward and let fly a thunderous shot from 30 metres out which almost produced a stunning goal but the ball cannoned off the crossbar with goalkeeper Lesperance well beaten.

St Louis though had to replace their injured goalkeeper Pleureuse in the 75th minute and in came Malagasy shot stopper Michel who nearly let in Kassah as he was slow to cover his near post in the 91st minute but the Malagasy striker headed wide substitute Ivan Cedras’ cross as they slumped to a defeat which ends their quest to retain their league title. Now Foresters are favourites to lift the league title for the first time if they can avoid defeat against La Passe next week though St Louis and La Passe can still claim the league crown if they win all their remaining matches but it will still depend on goal difference.

In fact, St Louis’ coach Michel Renaud wants his team to finish the season on a high and feels the players are getting into their stride after a long break.

“It was a good result as it helped us to close the gap at the top though we are still adjusting in terms of performance which is gradually improving,” St Louis’ coach Renaud told Sports NATION.