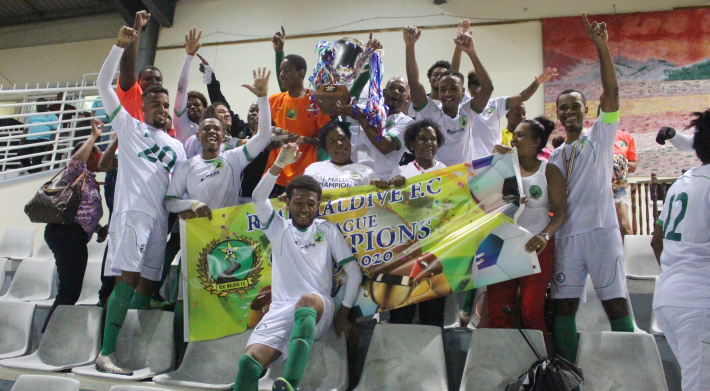 Real Maldives left it really late to clinch the Championship One league title with a last-gasp equaliser to draw 1-1 with their closest rivals St John Bosco on Thursday afternoon at Stad Linite.

There were scenes of celebration by the Real Maldives camp at the final whistle as the point guaranteed them the league crown as they were a minute away from conceding this cup to their opponents who had led since the 16th minute through a brilliant taken free kick by striker Yves Zialor from the edge of the penalty area and which flew into the top corner past a bewildered goalkeeper Madrid Adrienne to make it 1-0.

St John Bosco needed all three points to pip league leaders Real Maldives who were ahead with 43 points. As they came head to head with Real Maldives in this decisive league match, Pointe Larue-based St John Bosco had 41 points and had to win at all costs if they were to win the league title.

Nonetheless, the players of Real Maldives coach Don Anacoura started brightly and should have gone ahead in the 8th minute from Nick Labiche’s curling free kick which dropped invitingly to Josip Ravinia at the back post but he fluffed a gilt-edge opportunity.

Ravinia again failed to make use of another decent opportunity two minutes later when Malagasy Jean de l’Or chased a long ball to shoot at St John Bosco goalkeeper Duan Romain who parried his shot but the highly talented Ravinia was slow to react to the loose ball before the danger was snuffed out.

St John Bosco also went close in the 11th minute as captain Randolph Elizabeth found himself in acres of space but he hurried his shot and wasted a good scoring chance, but then Zialor broke the deadlock in the 16th minute after Jean Yves Ernesta was fouled just outside the penalty area.

Real Maldives should have levelled matters in the 32nd minute when Jean de l’Or sent a superb through ball to Ravinia who bore on goal but decided to flash the ball across goal instead of going for glory and his teammate Aubrey Francourt failed to connect to this inviting chance.

St John Bosco almost punished their opponents in added time in the first half as captain Terence Créa let in Zialor who thumped the ball at goalkeeper Adrienne who pushed the ball into corner for a 1-0 score at the interval.

Anse-Etoile based Real Maldives continued to probe in the second half and in the 47th minute, Ravinia latched onto a long ball to hassle past two defenders but he shot narrowly wide.

In the 69th minute, Ravinia again showed his class with a fantastic free kick which brought an equally good flying save from goalkeeper Romain.

As the minutes ticked away, Real Maldives threw caution to the wind and went mighty close in the 85th minute from Ravinia’s near post corner which was met by Rose’s header but the ball came off the post before the danger was cleared.

Real Maldives finally got a lucky break in the fourth of the five added minutes allocated by referee Kerens Yocette who had a very good game on Thursday.

The goal came from a long ball from the Real Maldives defence which was miscued by St John Bosco defender Dean Balette whose attempted headed clearance fell nicely to Ravinia who accepted this windfall so late in this match and he kept his composure to stab the ball past goalkeeper Romain to spark a wild expression of joy from the Real Maldives bench as he levelled the score at 1-1. On the other hand, it was a devastating blow to St John Bosco who had one hand on the title, but saw it so cruelly snatched away from them with this last-gasp goal which was enough to propel the players of coach Anacoura to the much coveted title at the third attempt after twice failing to gain promotion through the playoffs.

At the final whistle, the Real Maldives players rejoiced whilst the St John Bosco camp was stunned after being so close and found it too much to swallow and they did not even go up to collect their runners-up medal which was then given to a member of their management.

As for Real Maldives captain Terence Crea, he collected the league trophy from Seychelles Football Federation (SFF) president Elvis Chetty as they gained promotion to the Premier League and their coach Anacoura was overwhelmed with emotion when he spoke to Sports NATION after the match.

“Honestly it was not our best performance but tactically we played well and I had a hunch of how this match would pan out as I felt it would be best if our opponents would score first as they would then sit back and this is what happened as it worked perfectly for us and it is such a joy for me. I would like to thank the Almighty God firstly and all the people who have supported us since our formation and all the players for their devotion in helping to bring home this success,” Real Maldives coach Anacoura related to Sports NATION.

Sports NATION would like to congratulate coach Anacoura and all his Real Maldives players and management on winning the Championship One league crown. 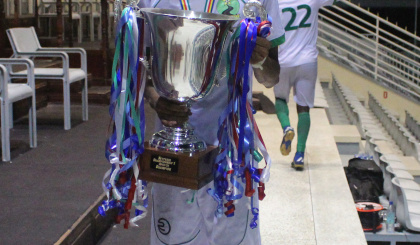