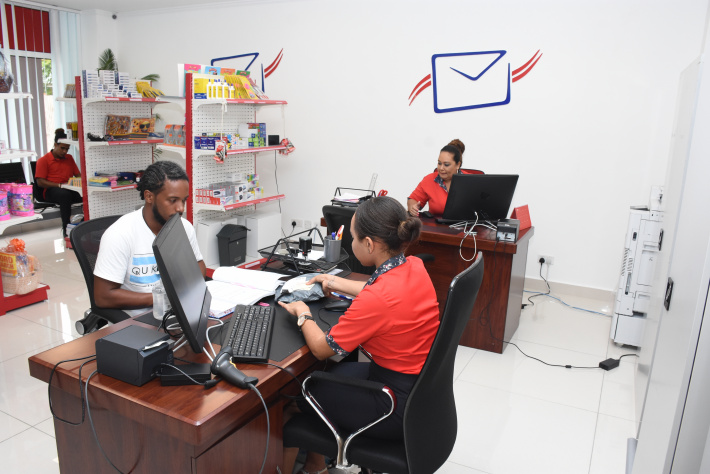 The Seychelles Postal Services’ branch at Anse Royale has moved to a new location at the newly constructed Arc Royale building.

Plans to relocate the Anse Royale post office to a larger location had been in the works since last year since the old office – situated next to the Anse Royale police station – was getting too cramped for the number of small packets coming in.

The Seychelles Postal Services (SPS) deputy chief executive, Alex Etienne said COVID-19 measures such as social distancing propelled these plans forward since it became increasingly difficult to operate in the old location while keeping a safe distance as the health measure requires.

Arc Royale is situated on the road leading up to Mont Plaisir, facing the School of Advanced Level Studies (Sals) on one side and the University of Seychelles campus on the other.

The Anse Royale post office continues to offer its customary postal services with special emphasis on the sale of stationeries given that it is found amongst various educational institutions and the youth hostel.

Mr Etienne also took the opportunity to explain how SPS has been dealing with its backlog of parcels accumulated up to December 2019, most of which originated from China.

“We tried to reduce the backlog in January, February and March this year but we had to close down during the semi-lockdown.”

He explained that SPS went into full gear again in May when it started an exercise to deliver in each district across Mahe.

A total of 7,200 out of around 10,000 parcels were delivered in this exercise while it also tried to deal with around 8,000 parcels at the Central Post Office in Victoria.

With COVID-19 leading to the closure of borders and commercial flights ceasing their operations, the Seychelles Postal Services has seen an almost complete halt in delivery of mail bags.

“We have received 100 mail bags since the restrictions but these are not representative of the number of mail bags we usually receive,” Mr Etienne noted.

But as the borders reopen next week on August 1, the postal service is gearing itself for the influx of over 15,000 mail bags that are presently stuck overseas.

“We are expecting them to start arriving as of next week and they will create a substantial backlog,” Mr Etienne highlighted.

The majority of mails and parcels coming in are from the United Kingdom, China, Unites States of America, South Africa, Dubai and Singapore.

“I would also like to take the opportunity to remind people that we are still faced with issues with the South African postal service which cannot forward the mailbags to Seychelles. The most recent consignment from South Africa dates back to December and I would discourage people from shopping in South Africa, such as on the Mr Price site and sending the items via postal services.”

With small packets increasingly taking up space in the Central Post Office as well as in its district branches, SPS is introducing a minimal processing fee for small packets as from August 1.

Customers will have to pay R10 on small packets that go up to the size “of a small diary” and R15 for larger packets.

“The fee has been introduced for various reasons; the amount of work we have to do for just one packet is a lot. On many occasions, we have had to go and look for the customers because some do not put their exact addresses – we have to search for the customers, call them and store the packets,” Mr Etienne further explained.

SPS was last week informed by the police force on the latter’s intentions to tear down the building for reconstruction which is why it had to move out.

With nowhere else to go, the La Digue post office has suspended all its services except for delivery of urgent mails.

Mail bags destined for La Digue will remain on Mahe, and La Digue’s four staff have been put on leave until the issue is resolved.

“The building we were in on La Digue is an extremely old one and from the conversations I’ve had with La Digue residents, the building should be considered as a national monument,” Mr Etienne said.

“Our plea to the government is to give us this building so that we can use it as a museum as well as for postal services.”

Mr Etienne noted that the Postal Sector Act of 2010 made provisions for SPS to own the properties it was occupying but even with this law, it has been kicked to the curb.

SPS and its parent ministry, the Ministry of Finance, Investment, Trade and Economic Planning is conducting various negotiations to find an office space for its La Digue outpost.