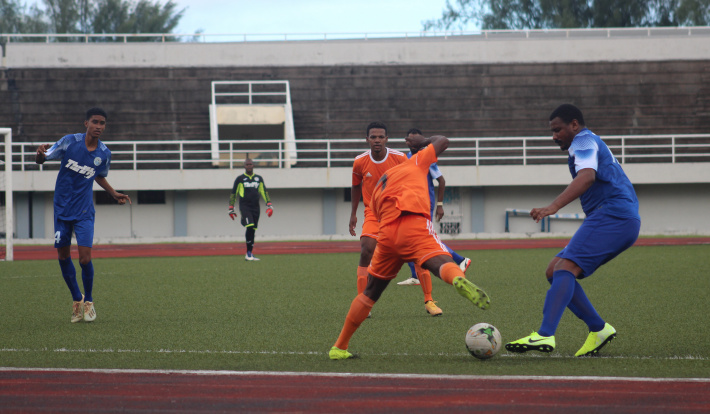 Championship Two side Rovers stunned Premier League outfit Revengers 2-1 on Saturday to reach the semifinals of the Seychelles Football Federation (SFF) Cup and they will be joined in the last-four stage of the cup competition by Foresters, La Passe and Côte d’Or.

SeyPearl Premier League leaders Foresters defeated Championship One side Pointe Larue Bazar Brothers 2-0 at Stad Linite on Friday, while on Saturday on La Digue, La Passe knocked out defending SFF Cup champions St Louis 5-4 on penalties after the score was locked at 1-1 after extra-time and Côte d’Or beat Beau Vallon 5-2 at Stad Linite.

Foresters kept alive their double dream with a hard fought 2-0 win over Championship One side Pointe Larue Bazar Brothers at Stad Linite on Friday evening to progress to the semifinal.

Francis Nourrice gave the Mont Fleuri-based side a 1-0 lead at half-time as he converted a penalty on the half hour mark.

Pointe Larue Bazar Brothers though should have drawn level in the 64th minute as Jean-Claude Berlouis found himself in the clear but he shot wide.

Foresters responded in the 73rd minute when Ryan Henriette raced clear to bore on goal but his shot was pushed into corner by Pointe Larue Bazar Brothers goalkeeper Gerald Tirant.

Foresters settled their nerve in the 81st minute when Nourrice linked up with substitute Leroy Corallie who stabbed the ball home for a 2-0 lead.

Berlouis was again guilty of a bad miss in the 84th minute from Denis Naiken’s corner as his shot at the near post flew wide as his team were beaten in a match where they gave the SeyPearl Premier League leaders a run for their money.

La Passe avenged their loss to St Louis in last year’s SFF Cup final as they triumphed 4-3 on penalties at the L’Union playing field on Saturday afternoon after the score was locked at 1-1 after extra-time.

The players of coach Bruno Saindini went ahead in this match in the 45th minute courtesy of a strike by Malagasy Marthelin to make it 1-0 at half-time.

St Louis though fought back as they equalised on the stroke of full time when defender Juninho Mathiot levelled the score at 1-1 to send the match into extra-time.

After the 30 minutes of extra-time, the match was at a deadlock and it had to go to penalties where Malagasy Rhino levelled matters after Nigerian James Joseph had put St Louis 1-0 up in the penalty shootout.

However, Randy Emile scored the vital penalty to make it 4-3 on penalties and 5-4 the final score to send La Passe to the semifinals of the SFF Cup to delight coach Bruno Saindini when he spoke to Sports NATION.

“It was a complicated match as we had the early control but it was still a very closely fought encounter. We were determined not to lose for a third time to this same opponent in a cup competition and therefore we are happy to have got through a very tough match,” coach Sandini told Sports NATION.

Championship Two title chasing Rovers travelled to Praslin and caused a major shock in the quarterfinals of the SFF Cup as they dumped Premier League strugglers Revengers 2-1 at Stad Amitié on Saturday afternoon.

After a goalless first half, Rovers took the lead in the 69th minute through Jim Loizeau (1-0) but Revengers levelled the score at 1-1 when Dino Chrysostome scored in the 81st minute.

Nonetheless, there was to be another twist as Rovers, who enter a crucial week in their bid for promotion, won a penalty which was dispatched by former The Lions striker Randolph Lablache to make it 2-1 the final score.

Rovers thus claimed the scalp of Revengers to book a semifinal berth.

Premier League side Côte d’Or coasted to a 5-2 victory over Championship Two club Beau Vallon at Stad Linite on Saturday afternoon to make it to the semifinals.

Côte d’Or, who relinquished their league title on Wednesday, made a bright start as they broke the deadlock as early as the 3rd minute from a long range strike by captain Benoit Marie which flew past Beau Vallon goalkeeper Steve Morgan to make it 1-0.

The Praslin side continued to go in search of goals but had to wait until the 15th minute to double their lead as captain Marie linked up with Malagasy Charles Rakoto but the ball broke to Malagasy Kassah who steered it into the net for a 2-0 lead.

In the 22nd minute, Dave Brioche sprung Beau Vallon’s offside trap to bore on goal but goalkeeper Steve Morgan did well to stop him in his stride.

Beau Vallon reduced the arrears in the 28th minute after a mistake by Shannon Stravens to let in captain Garvin Gonthier whose centre was messed up by Côte d’Or reserve goalkeeper Carlos Jean-Baptiste and Marcus Rose to let in veteran striker Roy Julie to score to make it 1-2.

Côte d’Or though were guilty of a bad miss on the half hour mark as Brioche latched onto a through ball to lob goalkeeper Morgan but the ball came off the crossbar to Rakoto but he headed over the bar with the goal at his mercy for a 2-1 score at half-time.

Rakoto did slightly better two minutes after the restart as he cut inside his marker to fire at goal but the ball ricocheted off the bar and fell to Randolph Louise but Beau Vallon substitute goalkeeper Aaron Sinon blocked the danger.

The outgoing league champions stretched their lead in the 48th minute as Rakoto beat the Beau Vallon offside trap to race clear and he unselfishly laid the ball to Brioche for an easy tap-in to make it 3-1.

Beau Vallon though hit back in the 68th minute when Côte d’Or goalkeeper Jean Baptiste saw his clearance charged down by substitute Mario Emilien with his first touch and the ball rolled into the net for a 2-3 score.

Côte d’Or though still had the upper hand as Kassah failed to shoot home a clear chance in the 70th minute after being teed up by Rakoto but his shot came off the foot of the post.

In the 79th minute, Côte d’Or made it four as Kassah broke clear to combine with Brioche who drilled the ball home for a 4-2 scoreline.

Côte d’Or rounded up the score in the 92nd minute when Rakoto and Kassah exchanged passes to carve open the Beau Vallon defence before Rakoto rifled at goalkeeper Sinon who allowed the ball to sneak in under his body for a 5-2 final score.

Côte d’Or coach James Barra was just pleased that his team had reached the semifinals though he thinks they have to improve their performance.

“It is a good result which helps us to make it to the semis but we have to work harder to improve our performance as we did not play well today and we will need to improve if we want to reach the final,” the Côte d’Or coach told Sports NATION.

As for Beau Vallon coach Gerard Gonthier, he said his team wanted to end the season on a good note but their game plan was affected by conceding early in the match.

“We wanted to try and end the season on a high note and honestly we expected to face St Michel at this stage and we were looking forward to play them and had prepared for them but it is just unfortunate and today we conceded early which made it difficult for us, but we tried to give all our players some playing time to enjoy the match,” coach Gonthier said. 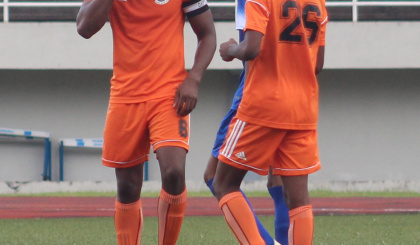