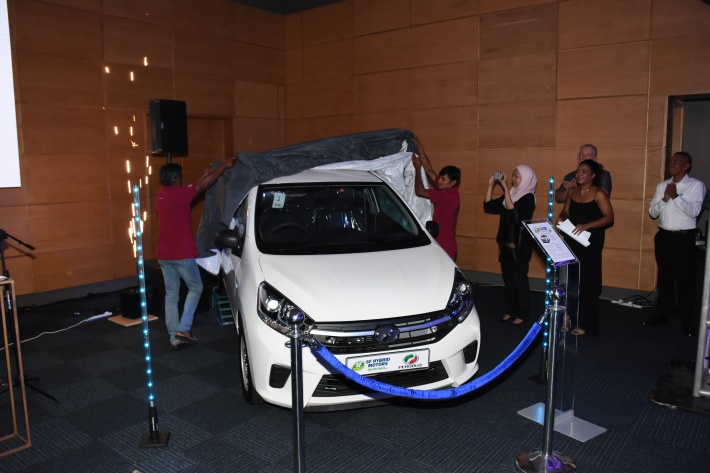 The official launch of the new car brand

A new car brand – the Perodua Axia – which recently went on sale was officially launched on Thursday evening after SF Hybrid Motors, the official distributor for the Malaysian made hatchback here unveiled the four variants to an avid audience in a ceremony at Eden Bleu.

SF Hybrid Motors of Providence has officially launched what it has described ‘a real beauty’, smart, modern and stylish little car and it will be responsible for sales as well as after-sales.

Christophe Larue, the public relations manager of SF Hybrid Motors, a family run business, said although the little hatchback is not a hybrid car, it is nevertheless cost efficient, smart, stylish and environment-friendly.

“The Perodua Axia is the perfect fit for Seychelles market as it delivers in all aspects – style, safety, security, ingenuity, low running costs as well as affordable spare parts and servicing,” said Mr Larue.

Four variants of the Axia are available – a baseline Standard E MT, Standard G AT, SE and AV.

The price ranges from R255,000 onwards but car enthusiasts who bought the car at the launch benefited from a special promotion price of R225,000.

Viewing the five cars on display at the launch both enthusiasts and prospective buyers were impressed by its sleekness, spaciousness with ample legroom.

“Really impressive and really appealing especially to the lady drivers,” one prospective female buyer pointed out.

Several guests were present at the event and among them the Minister for Environment, Energy and Climate Change Wallace Cosgrow, MNAs as well as staff of SF Hybrid Motors.

The managing director of Perodua Dato, Dr Zahari Husin, flew all the way from Malaysia to Seychelles especially for the occasion.

He said the automaker is really excited about the potential of this new export market, saying that its popularity as a tourist destination will open more export opportunities through brand exposure.

“Our mission is a very simple one and this is to offer value for money and high quality products,” said Mr Husin.

He confirmed that during its 26-year existence, his company – a joint venture with Japanese carmaker Daihatsu – has sold over 3.5 million cars in Malaysia alone and Seychelles is the 2nd African market after Mauritius where it has been present since 1996.

During the launch ceremony Zil Car Hire, which has already added some of the cars to its fleet, and ASP Antoine Denousse, who was also finalising the process of buying one of the cars, all received their car keys. 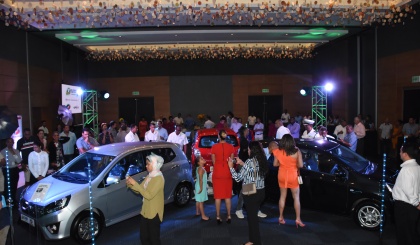 Guests admiring the new cars during the launch ceremony