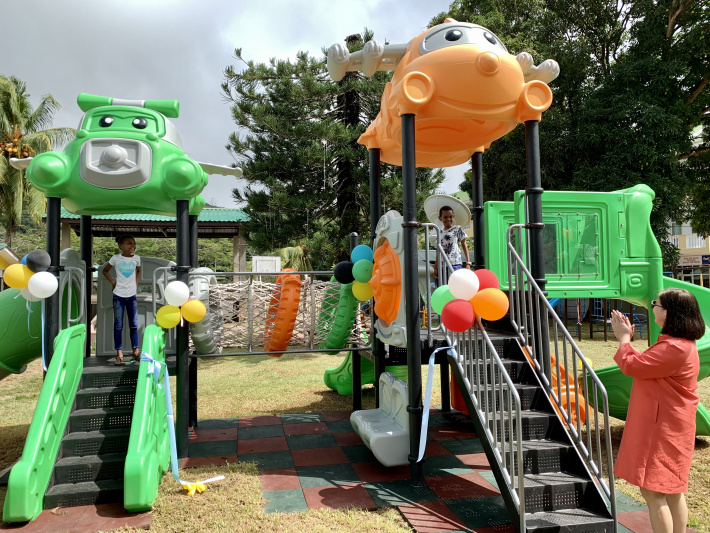 The Baie Ste Anne community has welcomed the opening of the newly renovated playground – a project made possible with the Embassy of the People’s Republic of China as the main sponsor alongside other local partners such as the Raffles Hotel and other small businessmen.

According to Ambassador Guo Wei, the Chinese embassy responded to the initiative of the Minister for Family Affairs, Mrs Larue, for help to revamp the Baie Ste Anne playground which unfortunately had to be closed as it was in poor condition. The embassy responded positively although this had to be done on a limited budget. They enquired about the local needs of the children of Baie Ste Anne to carefully plan the upgrade of the current playground and ensure that it turns out safer and more amicable for the children.

In close collaboration with different departments, especially those of family affairs and local government as well as the Baie Ste Anne district team, the upgrade work which was carried out by Qiangjing International (Seychelles) Group Dev. Co. Ltd was made possible.

“With the joint effort of all parties, the newly refurbished playground was successfully completed and officially opened today. It brings together the hard work and efforts of many people and a new symbol of friendship between China and Seychelles,” said Ambassador Guo Wei.

The playground which was originally inaugurated in 1985 by Armantal Lesperance, now has many new, colourful toys such as slides, swings and seesaws; all of high quality and imported from China. This project is part of a series of playground refurbishment in other districts such as Anse Royale, English River and Persévérance, all of which are highly appreciated by the local population.

“On important festivals such as Children’s day and Christmas, the Chinese embassy has never been absent. We have donated many school supplies and toys to Seychellois schools, hoping to bring some joy to the children. In the future, we will continue to support the development causes of women, children and young people in the Seychelles; strengthening the cooperation with the Seychellois side in relevant domains,” added the ambassador.

“Children are the future and hope of a country. The embassy hopes the new playground will become a place of fun and relaxation for children and community. We also hope that the innocent smiles of children could disperse the gloomy clouds of the pandemic and strengthen our conviction to defeat COVID-19,” Ambassador Guo Wei shared.

On behalf of all the children and parents of Baie Ste Anne, member of National Assembly for Baie Ste Anne Churchill Gill thanked the Chinese embassy for the realisation of what he described as a “well-deserved project”. He called on the community to make good use of it.

“A lot of effort and energy have been put into this wonderful project which we are proudly witnessing its opening today. Surely all concerned wish that this facility is put to good use for continuous enjoyment by the children accompanied by their parents to ensure their safety,” said MNA Gill.

“After many years that the playground has served the community at this exact location and taking into account the condition of the toys, renovation work on the premises was of paramount importance,” Dennis Antat, Baie Ste Anne district administrator expressed in his vote of thanks.

“We would like to express our sincere appreciation to the Chinese embassy and our local sponsors, namely Raffles Seychelles and businessmen Jean Claude Dubignon, Jacquelin Victor, Jean Athanase and Mike Moosa. We do appreciate your generous contributions towards this project,” added Mr Antat who also thanked his dedicated staff, especially those of the project department for their hard work.

Raffles Seychelles made a significant contribution towards the project in partially financing the boundary wall to ensure the safety of the premises. On behalf of the five-star resort, Anita Soumery thanked the Chinese embassy for the heartfelt donation and vowed Raffles Seychelles’ commitment in also contributing towards children’s development in the Baie Ste Anne community by signing a memorandum of understanding.

“It was indeed an honour for us to sponsor the boundary wall of this modern facility. Raffles Seychelles firmly supports child development and child protection and through the signing of this MoU today, we would like to reaffirm our commitment towards the children of our community,” said Ms Soumery.

Mr Antat explained that refurbishment work is ongoing to add additional facilities to ensure that the playground meets all health measures in place before it can welcome its visitors. This includes toilet facilities and bins. Once it becomes fully operational, opening hours will be from 10am to 6pm and playground attendants will be present to guide children and parents while they have fun.

Chinese Ambassador Guo Wei and local government principal secretary Marie-Celine Jeannevol also signed a memorandum of understanding for the maintenance of the newly installed toys during the first year of operation.

At the end of the ceremony, all children present received a token of friendship from Mrs Guo Wei. 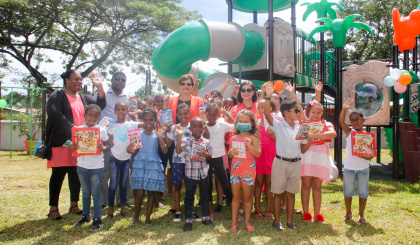