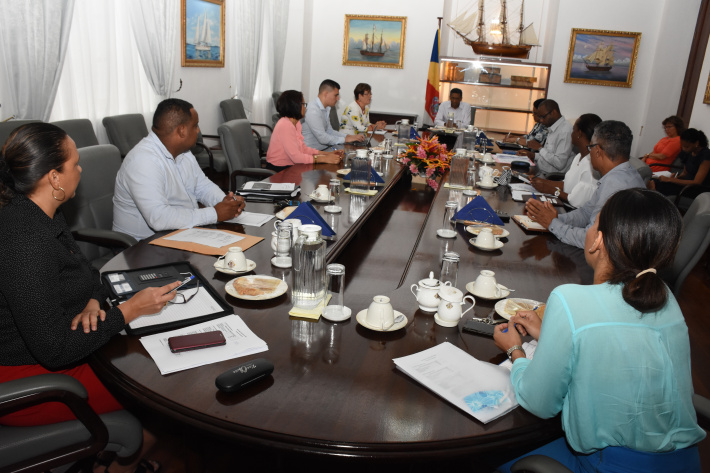 Since it was set up six weeks ago, the Seychelles Employee Transition Scheme has until now received 300 cases of redundancy of which 55 are on Praslin and six on La Digue, but it has managed to place almost all the individuals on Mahé in work placement contrary to those on Praslin and La Digue.

Seychelles Employee Transition Scheme (Sets) chief executive Guy Morel gave those details yesterday at State House following a meeting with President Danny Faure to update him on the progress that Sets has made so far as well as the other programmes in place to support workers made redundant.

The meeting at state House was also attended by the Minister for Employment, Immigration and Civil Status Myriam Telemaque and the Minister for Family Affairs Mitcy Larue as well as other representatives of the two ministries.

Mr Morel also announced that Sets’ office has now been set up and is located in Room 2 at the ICCS and its phone number is 4325333.

In addition to the work placement, Sets is also targeting three major projects. It is in the process of setting up its offices on Praslin and La Digue.

Sets and The Guy Morel Institute signed an agreement earlier this week to formalise their partnership with the launch of the ‘Entrepreneurship skilling intervention programme’ expected on August 24.

“The programme has been specifically designed to sharpen the entrepreneurial skills of the local entrepreneurs and small business owners. The training will target some 250 people who are already in business and will mainly focus on leadership and how to help the Seychellois move a step forward in their career path,” explained Mr Morel.

Next week, Sets will sign an agreement with the Seychelles Tourism Academy for the ‘Tourism upskilling programme’.

“Based on our discussions with our partners we found out that there is a gap in terms of management and leadership capabilities to try to fill the void and promote Seychellois talent. We are targeting to recruit 125 Seychellois. We hope that when the economy picks up again, the newly trained people will be considered for promotion in their respective work place,” explained Mr Morel.

Sets is hoping that with the project ‘Rebwazman’ on Praslin, they can plant some 500,000 plants.

“But from August to December we are hoping to plant 100,000 trees. This is an ambitious project but if we need transformation we need to take bold steps. This project already existed and was being done by Trass (Terrestrial Restoration Action Society of Seychelles) and by increasing the number of trees to be planted, we will cater for the people made redundant on Praslin,” Mr Morel highlighted.

Meanwhile, Letimie Dookley, director general of the employment promotion division, added that in general there are a lot of opportunities in Seychelles right now even though it is not the dream opportunities for many.

“After we briefed President Faure on how the different programmes are working within the employment division, we also talked on how to collaborate with the other partners such as Sets, private and government sectors, Agency for Social Protection to address the gaps in the process. The different programmes are proving to be successful and mainly the internship programme with the young graduates. There were 4,000 people who registered for the unemployment relief scheme and we have succeeded in placing 1,000 in jobs. Today, we focused mainly on the remaining 3,000 persons. These people are either waiting for a placement and we are asking all the ones concerned to come forward and meet with us and take up new opportunities. We cannot afford to leave anybody out right now and we do not want people to stay at home and being unproductive,” Mrs Dookley pointed out.

She further noted that there are also 600 young people who registered with the ‘My First Job scheme’ programme and 300 have already got a job and others are on placements.

“This is an opportunity to congratulate our youth as they understand the situation and have joined the bandwagon by accepting the allowance the government is providing,” noted Mrs Dookley.

Both Mrs Dookley and Mr Morel stressed on the fact that opportunities are here and people facing difficulties should contact them to be helped.