Commission gets context evidence on 1977 coup and its aftermath

Attorney-at-law Antony Derjacques was before the Truth, Reconciliation and National Unity Commission yesterday as a general witness to give an overview, or context evidences and understanding on the different perspectives of the 1977 coup d’état, its aftermath and the re-introduction of multi-party and its impact.

Mr Derjacques was invited by the Truth, Reconciliation and National Unity Commission (TRNUC) as being someone who represented victims of abuses during the one-party state and afterwards.

His presentation was based on first-hand knowledge from himself, court cases and other documentations such as the Riley and elections reports.
Ex-Cable & Wireless employee Paul Michaud also appeared in front of the commission as an expert witness in the field of phone tapping and bugging which was a common practice during the one-party state era.

The fall of communism leading to a multi-party system

In his introduction, Mr Derjacques explained on the reasons for the change of republic – second to third – and also the reasons for a third constitution, as well as supposed changes within the structure of the state, including oppression which began in the second republic and still being applied to date.

Talking on the second republic, Mr Derjacques said at that time Seychelles was being categorised as socialist-orientation state and not an advanced socialist state like the Union of Soviet Socialist Republic (USSR).

The socialist-leaning countries, or ‘countries of socialist orientation' were the post-colonial Third World countries which the USSR recognised as adhering to the ideas of socialism in the Marxist-Leninist understanding.

As a result, these countries received significant economic and military support.

He explained that through the ideology, ex-President France Albert Rene and regime believed in the dictatorship of the proletariat where there is absolute control of economic and political power in a country by a government of the working class.

In reference to democracy, the difference between the second and third republic is that the former was based on democratic centralism, whereas the latter is in a transition process to achieve a pluralistic society which is for tolerance, fundamental human rights, as well a balance of power between the executive, the legislative and the judiciary.

He noted that even if in the preamble of the 1993 Constitution there is the definition of democracy, Seychelles is still on the path to achieve a normalised or mature democracy.

With the collapse of the USSR and the Eastern European satellites based on poor economic performance and growing nationalism, the socialist ideology fainted with exception of a few countries, like North Korea and Cuba.

The Singapore Declaration had committed the Commonwealth to several principles in 1971: world peace and support for the United Nations; individual liberty and egalitarianism; opposition to racism; opposition to colonialism; the eradication of poverty, ignorance, disease, and economic inequality; free trade; institutional co-operation; multilateralism; and the rejection of international coercion.

In Harare, the Heads of Government dedicated themselves to applying these principles to then-current issues, such as the end of the Cold War, the near-completion of decolonisation, and the impending end of the apartheid government in South Africa.

In this sense, it is considered to have set the Commonwealth on a new course, distinct from that followed before.

According to Mr Derjacques, the British Prime Minister at that time, Margaret Thatcher, talked to Mr Rene and informed him that if the Harare Declaration is not applied, Seychelles will be removed from the Commonwealth.

In his extraordinary party congress in December 1991, Mr Rene informed the party (Seychelles People’s Progressive Front – SPPF) that multi-party should be re-set in Seychelles and in 1992 it was restored.

Second republic within the multi-party system

Despite adopting a multi-party system in 1992, according to Mr Derjacques, the ruling party still came up with and adopted several mechanisms to maintain control and to uphold the principles of the one party state, but in a legalised manner.

He explained through various examples how the SPPF managed to maintain authoritarian power and ruling despite the fact that the country had transited from a one-party to a multi-party system.

Mr Derjacques used the example of the militia which was created under the Defence Forces Act of 1981 and had been recently removed this year, precisely in May. This, he said, is proof that they have maintained the institution, but legally under the National Guard, attached to the SPDF and later on to the police force.

Other than the name and additional functions, the main function and purpose of the institution which was to safeguard the revolution remained the same.

Mr Derjacques also made reference to the national flag and national anthem of the third republic which were adopted only in 1996, or four years after the re-introduction of multi-party.

This, he said was only after the now leader of the opposition Wavel Ramkalawan brought a motion in front of the National Assembly to change the national symbols.

This, Mr Derjacques explained, illustrates clearly how the second republic was brought into the third, without changes in structure and ideology.

M Derjacques also gave the example of the vertical integration case against the government whereby the government was inserting socialist principles in the country’s economy.

Vertical integration is an arrangement in which the supply chain of a company is owned by that company.

Usually each member of the supply chain produces a different product or (market-specific) service, and the products combine to satisfy a common need.

It is contrasted with horizontal integration, wherein a company produces several items that are related to one another. Vertical integration also describes management styles that bring large portions of the supply chain not only under a common ownership but also into one corporation.

Another example he gave was security clearance – the process of performing a background check on someone, checking his political affiliation and loyalty towards the regime before offering them employment, or business opportunity. Mr Derjacques said this was still being applied, but has reduced since the last parliamentary election better-known as 15-10.

He also used the local government which was set up in 1991 as another example of structures set up to help the government infiltrate in the districts and since opposition was not that strong over the years until 2016, the structure has remained an influential political tool at district level.

State control of the economy – a command economy where the government, and not the free market, controls all economic activity – was another example given by Mr Derjacques and the Islands Development Company (IDC) was stated as an example.

The IDC was formed under a company’s act with a shareholder which is the government, meaning it is neither a parastatal nor a governmental entity, but still its direction is in the hands of the executive and its nominee which is the director who has been holding the position for almost 40 years.

In relation to unfair elections, Mr Derjacques said state resources have been used by the SPPF over the years to win elections, while such acts, including briberies were not seen as a crime.

He explained that bribery and abuse of state resources for election campaign purposes have been a signature move of the party in power, while the opposition has always boycotted and clearly spoken against such practice.

Regarding the Public Order Act, Mr Derjacques noted that it was another means of scaring people and also restricting their rights, especially in the claws concerning seizure of films of law enforcement activities which was rejected by the court.

The law stated that any police officer or an NDEA officer or a customs officer or an immigration officer, if satisfied upon information and after such further inquiry as that officer thinks necessary, that any person is making, has made or is about to make [...] without warrant, and with such assistance and by such force as is necessary, seize any film or picture or and any equipment (including a mobile phone) used or about to be used in the making, storage, exhibition or communication of the film or picture; and take into custody any person reasonably believed to be in possession of such film or picture or document.

Mr Derjacques also submitted several of his case files in relation to different types of abuses, assaults and even murder to the commission.

To begin with, Mr Michaud explained that telephone tapping – the monitoring of telephone and internet-based conversations by a third party, often by covert means – is a legal practice but only through court order.

The wiretap received its name because, historically, the monitoring connection was an actual electrical tap on the telephone line.

In the first part of his presentation which was in open session, Mr Michaud gave some detailed technical explanations on how the different types of tapping were carried and also the dangers and liabilities of getting your phone tapped.

He also explained that phones of individuals from all level of the society were tapped, including high SPPF officials, the clergy and ordinary citizens. 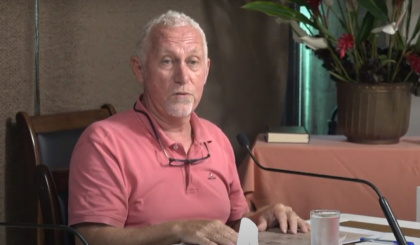 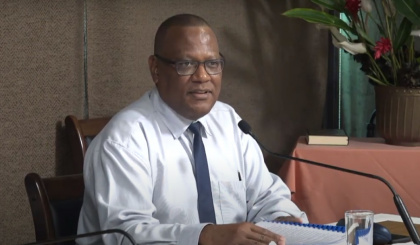