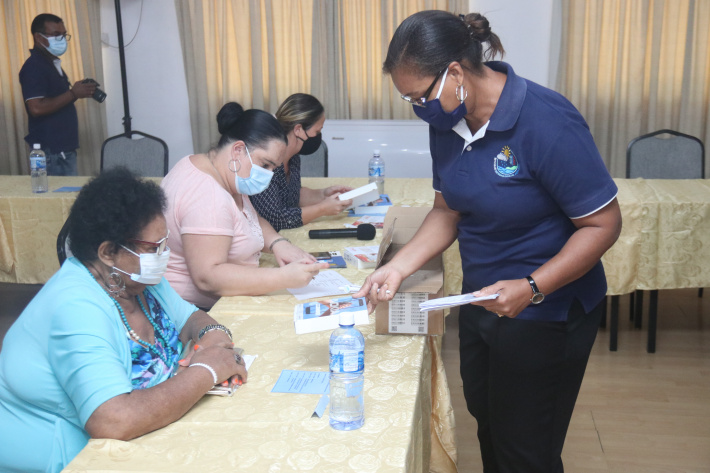 Distributing the app to the volunteers (Photo: Thomas Meriton)

The Seychelles Meteorological Authority (SMA) has launched a new weather app for all its volunteers.

The app will run on simple Smartphone units where the observer will have an account where they can log in and send the daily rainfall reading, without the need for staff of the climate unit of SMA to call and ask for the said measurement. This is in an effort to make the entire process more efficient and fluid for both parties.

The launch took place at the STC conference room in the presence of the Minister for Environment, Energy and Climate Change Wallace Cosgrow, the chairman of the Seychelles Meteorological Board Gerard Hoareau and the principal secretary for energy and climate change Wills Agricole.

The chief executive of SMA, Vincent Amelie, noted that currently there are 44 stations (manual rain gauges) across the country – 30 located on Mahé, 8 on Praslin, 3 on La Digue, 1 each on Silhouette, Denis, Aride and Curieuse.

“SMA has for many years enjoyed a most fruitful partnership with its network of voluntary rainfall observers. Individuals and organisations alike have played an integral role in the maintenance of a robust observation network spanning a vast majority of the territory belonging to the Republic of Seychelles. Though the daily task of measuring the amount of rainfall has not been a vastly complex one, its importance cannot be understated and neither can the discipline of our voluntary partners in adhering to the desired standard of punctuality,” said Mr Amelie.

As part of the ongoing efforts of the SMA to modernise its services, early in 2020 it contracted a local expert to develop an app that would serve dual purposes, namely; to serve as a weather and warning app, through which the general public could have firsthand access to the extreme weather warnings put out by the SMA and to facilitate the task of collecting daily rainfall measurements by connecting the SMA to the voluntary observers via the internet.

Mr Amelie noted that some volunteers are relatively new while others have been around for many years and the longest serving volunteers are Maurice Loustau-Lalanne at Fairview, Mrs Elinas at Anse Forbans, Anse Boileau Research, Tea Factory, Le Niol and Rochon Waterworks PUC who have been providing the Met office with rainfall data for an impressive 45 years and are still doing it diligently.

At the end of the presentation, SMA distributed a Smartphone unit to each volunteer with a SIM card. Each volunteer also got an amended MoU between the two parties, taking into consideration the investment made on the part of the SMA into new equipment.

Having been a board member of the Meteorological Services for a number of years, PS Agricole noted that “Seychelles is lucky to have volunteers since the time of the British. You had farmers or civil servants who were interested in climate and the info we receive from them are very important to help us give the right prevision be it short-term or long-term. I was also a forecaster and the volunteers were communicating with me every morning from 7am to 9am. The most important part of this service is that the people were doing it out of love and without remuneration. This is an example of volunteerism. Many people were not aware that there is a group of volunteers who religiously give us the details every morning. Former Minister Bernard Shamlaye then brought this to the attention of Unesco. As a meteorologist, for me this act of service is consequent!”

Rebecca Loustau-Lalanne is from Fairview estate and her family has been collecting data for the Seychelles Meteorological Authority for the last 44 years.

“When my dad was working at the airport he started to do the reading of the rainfall. We have a small weather rain gauge that is based at Fairview. Since then we have continued to do it. We have the grandmother at the house who does it with other members of the family. The SMA comes to check the equipment and change it whenever it is necessary. Every day at 7am we give the reading to the meteorological services without fail.

Nathalie Rose’s family has been collecting the reading for years at La Misère. “My parents have been volunteering for many years and this is something they like to do. Our family makes it a daily routine to check the weather and this shows that all the volunteers are helping out in the weather forecast for Seychelles. La Misère is well known for having rain more than any other places, it is a way for us to give credible information. Even our children at home are learning to do this job and this is also educating them about the importance of weather forecast.”

The SMA thanked all their volunteers for the important service they are rendering and praised them for their consistency in sending data to the SMA. 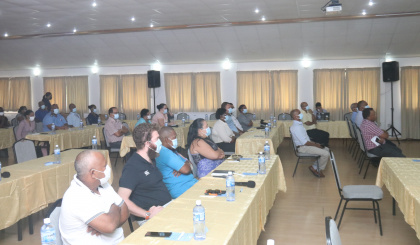 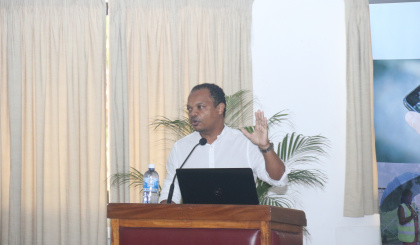 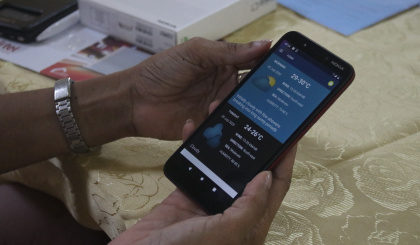 An example of how the app works (Photo: Thomas Meriton)