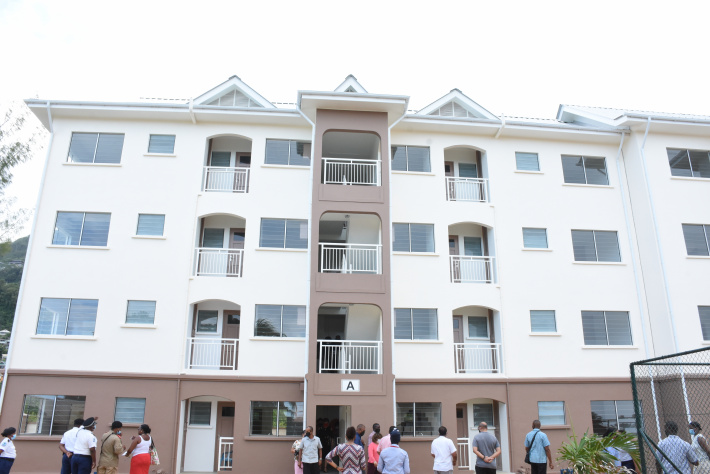 A partial view of the new houses (Photo: Thomas Meriton)

Sixteen families have received their keys to their new homes as another phase of the 24 housing projects in 24 districts reached its completion, this time in the district of Roche Caiman.

It was President Faure and Minister Charlette who received the honour to unveil the commemorative plaque for the occasion.

In order to keep social distance, each family was represented by only one member and other measures such as wearing of face masks were also observed.

The new housing project within the Roche Caiman 2 estate comprises two blocks of eight two-bedroom and eight three-bedroom units, constructed at a total cost of R11.7 million by Allied Builders. A playground has also been set up in the grounds to cater to the children

It took around 2 years for the local contractor to complete the project since it started work in May 2018 and concluded during the first week of July 2020.

The project is said to have encountered numerous delays due to encroachment issues and additional work that were not in the original plans.

All 16 families who have benefitted from this project were on the ministry’s prioritised list accumulated under the housing point system and are already residents of Roche Caiman.

In her speech, Minister Charlette described the Roche Caiman project as one of the best projects constructed under the 24 houses in 24 districts (24/24) initiative.

Minister Charlette explained that even with land being a limited resource, her ministry was able to squeeze the two apartment blocks in the one of the few remaining parcel of land in the Roche Caiman district.

It is to be noted that another eight housing units are currently being constructed in Roche Caiman and when completed the district would have gained its 24 houses under the 24/24 initiative.

“The government’s efforts and engagement towards providing housing solutions always remain its priority and this is why it invested a lot in the 24/24 for each district, self-finance houses for semi-professionals and condominiums for our graduates,” Minister Charlette underscored yesterday.

The minister further appealed to the new homeowners to take care of their property and families and to create a harmonious community based on values that would reflect on their beautiful housing estate.

“President Faure’s government, through my ministry, will continue in its journey to construct more houses, put in place numerous facilities for the benefit of the people and implement frameworks for social and economic development,” she added.

Following the brief ceremony, the homeowners were able to take a better look at their apartments along with President Faure, Minister Charlette and other officials.

The first home which President Faure got to visit was that of 35-year-old Dott Melanie and his family consisting of his partner and their two little girls.

Mr Melanie noted that he had put in his housing application as soon as he left school some 17 years ago and has been paying his monthly contributions for 9 years with the hopes of getting a place to call his own.

Now, Mr Melanie said that he is satisfied with getting his home and added that the small home would do for his small family.

On the floor above, 31-year-old Trecia Florentine provided a similar story since she filled in her housing application as soon as she started work around 2006.

“I’m happy to have received a house in the district where I was already residing; this makes it easier for us on all fronts. Our new neighbours are familiar faces that we have seen around the district so I am happy with that,” Ms Florentine stated.

The homeowners have around 14 days to move into their homes. 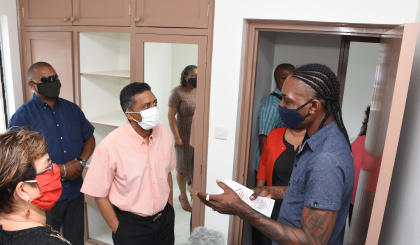