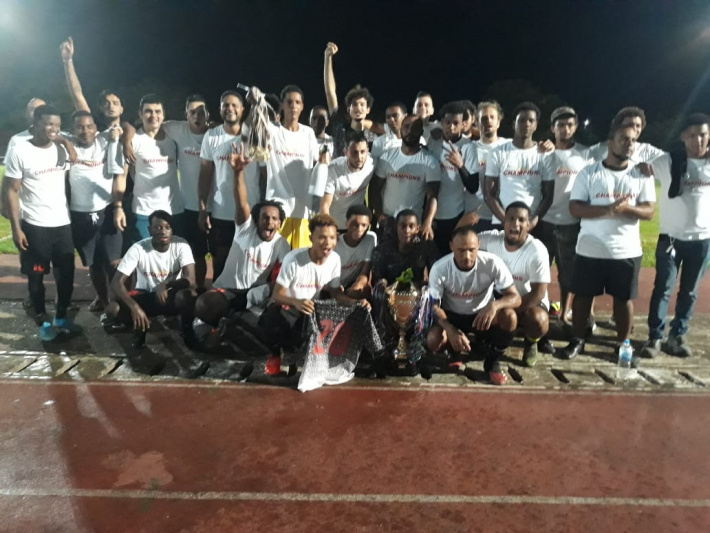 Rovers were crowned Championship Two league champions on Friday evening at Stad Popiler after they edged Marine Maintenance 1-0 in their final league match.

The victory enabled Rovers to overtake league leaders Bel Air with more goals scored as the two teams finished the season locked on 37 points after 14 matches and they have the same goal difference of 28.

However, Rovers have a better head to head result as they drew 1-1 in the first round and beat Bel Air 4-1 in the second and coach Collin Stravens, who is in his second spell with this team, told Sports NATION that from the onset, the objective was to win promotion.

“We did not start well as we lost our first league match but then we went on an amazing run which culminated in this final match which helped us to attain our target and therefore I’m very happy though it has been hard work and sacrifice, but the players have shown great devotion,” revealed the Rovers coach.

Nonetheless, coach Stravens said it has not been easy as they do not have a sponsor and the players have to buy all their playing gear and they also faced problems with training facilities as they had to pay to use the Astroturf pitch where they trained from 7pm to 9pm.

“It was quite challenging but we had to recruit players to bolster the team though we had only local players but we persevered and I’m grateful to Philip Zialor for his support and I would also like to thank coach Steve Herbots who is a very good tactician as well as Kosta Todorovic and Milan Balaga who are part of our management team,” coach Stravens added.

As for the future, coach Stravens stated that they plan to open an academy with around 25-30 players, adding that it will help them to sustain this club for many years to come.

Sports NATION would like to congratulate the Rovers players and management on winning the Championship Two league title.