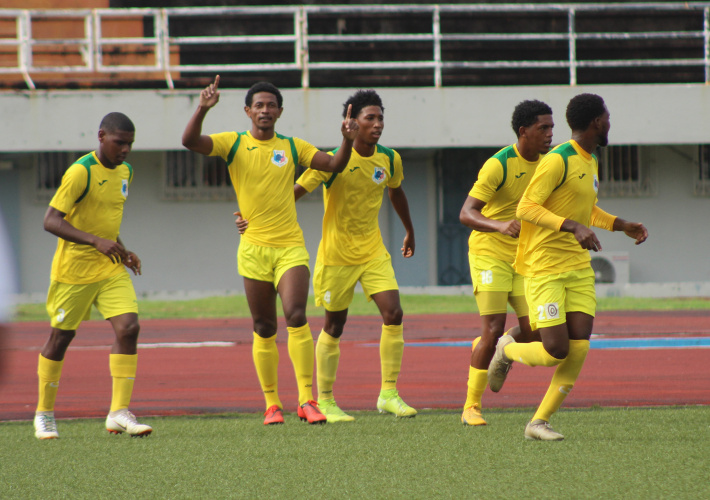 Foresters needed only a draw in their final league match to claim their first league crown but La Passe rewrote the script in this encounter which was delayed due to bad weather on Praslin which made it impossible for the plane to take off to Mahé for this match scheduled to kick off at 2pm but only begun at 3.15pm.

However, it was a match worth waiting for as La Passe took the lead in this fascinating clash as early as the third minute when Foresters defender Warren Mellie saw Malagasy Marthelin’s shot come off his flinging arm and referee Kerens Yocette awarded a free kick on the edge of the penalty area. Malagasy Toky Andriamanjato stepped up to cleverly roll the ball under the Foresters wall to beat goalkeeper Kitson Cecile to make it 1-0.

Foresters had to react and they went close in the 12th minute from Martin William’s near post corner to Nigerian Kazeem Adeyeri but he could not direct a free header on target.

Five minutes later, Adeyeri collected a long pass from defender Kenner Nourrice to skip past captain Senky Vidot and Kenny Constance but he fired his shot over the bar.

Foresters should have drawn level just past the half hour mark after some good work down the line by Ryan Henriette before he sent in an inch-perfect cross to his captain, Malagasy Jean Tigana whose downward header produced a brilliant reaction save from goalkeeper Ian Ah-Kong to turn the ball into corner.

The Mont Fleuri-based team were hard done by the official in the 35th minute when captain Tigana tried to chip the ball into the La Passe penalty area but the ball came off the arm of captain Senky Vidot for a penalty but referee Yocette waved play on as Foresters appealed for a penalty.

La Passe stretched their advantage in the 51st minute as Foresters lost the ball and Marthelin broke forward to link up with Toky and in the impending mêlée, defender Mellie went down and waited for a foul in his favour, but the official did not oblige allowing Toky the time to rifle a left foot shot into the top corner for his brace and a 2-0 score.

Foresters looked rattled and four minutes later, they conceded again from Toky’s teasing cross across the goalmouth to substitute Randy Emile who blasted the ball past goalkeeper Kitson Cecile for a 3-0 scoreline.

Foresters though were given a lifeline in the 61st minute as captain Tigana slipped a pass to substitute Leroy Corallie who was brought down by Kenny Constance for a penalty which was coolly dispatched by captain Tigana who sent goalkeeper Ah-Kong the wrong way for a 1-3 score.

Goalkeeper Ah-kong though, who had a superb match, made a great stop in the 69th minute to deny captain Tigana with a well struck free kick which was creeping in at the far post if not for the La Passe custodian’s timely intervention.

Foresters threw caution to the wind and reduced the arrears in the 87th minute as Corallie hooked the ball into the net to make it 2-3 after La Passe failed to clear an Adeyeri corner.

There was to be a grandstand finish as Foresters pressed for an equaliser to guarantee them the league title but Malagasy substitute Rhino thumped one of his trademark free kicks deep in injury time which rocketed into the net via the post from 25 metres out for a 4-2 final score to propel La Passe to 44 points – two behind league leaders Foresters and with a final game against LightStars where they must win to claim the league crown.

La Passe coach Bruno Saindini told Sports NATION that his players knew what was at stake in this match and he praised them for a good job to beat Foresters and place them in a strong position to win the league title as their destiny is in their own hands.

“We know we had to win to boost our chances of winning the league title so the players played quite well and scored at crucial time, so I’m very pleased with the result and performance and we have to aim for another victory in our last match,” the La Passe coach related to Sports NATION.

As for Foresters coach Harold Hoareau, he was bitterly disappointed that his team lost this vital match where they had created many scoring opportunities but were left broken-hearted at the final whistle.

“We had a good first half especially offensively but we failed to take our chances and then gave away goals through lack of concentration though we were also denied a good claim for a penalty. We now have to wait for the final league match and depend on a favour from LightStars,” explained the Foresters coach who ironically last year was denied the league title with Red Star Defence Forces when they lost to LightStars.

LightStars defeated St Louis 2-0 at Stad Linite on Friday evening in a league match which was goalless at half-time.

However, Malagasy Paul Bruyelle opened the scoring in the 52nd minute and Renick Esther sealed St Louis’ fate with a strike in the 70th minute for a 2-0 final score which delighted coach Ted Esther.

“We expected our opponents to play a passing game so we pressed them, especially in the second half and it was a very good performance and a good result for my team as our tactics were perfect to foil our opponents,” coach Esther said after the match. 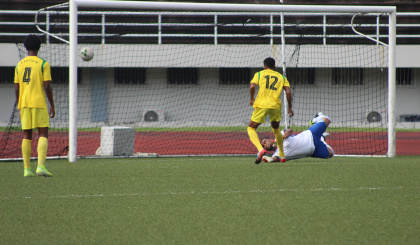