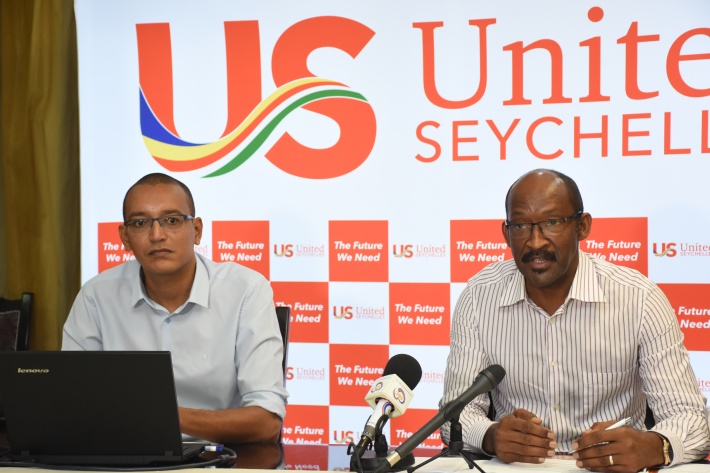 Vice-President Meriton and Mr Jean-Louis during the press conference

US reveals new rules for selection of presidential candidate

United Seychelles has commenced process to select, through endorsement by congress, a presidential candidate for next year’s elections.

In a press conference held at Maison du Peuple on Friday, United Seychelles (US) leader Vincent Meriton and secretary general Andy Jean-Louis who is also the chief executive, provided details on the selection process in which candidates who are eligible for consideration can file an expression of interest and congress will decide through a vote to elect a candidate.

The new selection process is provided for by the US Constitution adopted by congress on November 24, 2018. Article 31.1 imparts to the National Executive Committee, powers to make and review rules for the nomination of the party’s candidates to selected offices.

The rules for appointment stipulate four factors to determine who is eligible for consideration as the party’s candidate for the presidential election:

(iii)                 if they agree to conjointly with the party bear responsibility to finance the campaign according to law. Under the current electoral laws, a candidate can raise R1 million from a sponsor, and

The candidate is then required to fill in five forms, the first of which is an expression of interest form, an endorsement of applicant form in which he/she is required to prove that at least 100 registered members of US endorse the candidature, thirdly a vetting form to be delivered to the ethics commission, fourthly declaration of assets and liabilities and finally the commitment to endorse the selected candidate form. The fifth form serves as a commitment to support the presidential candidate who is eventually elected by congress.

The candidate is also required to outline his/her vision as a potential President of Seychelles and the qualities and capabilities that make him/her a candidate that the Seychelles electorate will endorse.

The expression of interest form and endorsement of applicant form and the fifth document, the commitment is handled by the US election committee while the vetting form and declaration of assets and liabilities is handled by the ethics commission in a bid to keep the process transparent and fair, and free from impartiality.

Prior to the vote, congress will be presented with a resume of each candidate inclusive of a copy of their vision statement. The approved candidates will also be required to address congress prior to the election.

If only one candidate expresses an interest to stand as a presidential candidate for US, the candidate is automatically elected by acclamation under Article 33.4 of the US Constitution.

Selection of the presidential candidate is by way of simple vote majority in which the winning candidate receives more than 50 percent of valid votes cast. In the case of a tie, a new vote shall be taken.

Mr Jean-Louis asserted that the process is transparent. The approved candidates for election by congress are required to be present when votes are being counted.

The process for the candidate to select the running mate, or vice-president is relatively similar to that of the presidential nominee. The potential running mate will also be vetted and be required to declare assets prior to being approved by congress.

During the press conference, US leader Meriton remarked that in the past, only one candidate expressed an interest to stand for the presidential elections based on recommendations of district-level committees who nominated candidates.

“In the spirit of modernisation, we have left this behind and it is up to the individual who wishes to be a presidential candidate to follow the explained procedures. In our process, the declarations that will be made, if there is more than one, when the candidate who has been elected, and is thus the official candidate, the other candidates need to publicly engage and support the presidential candidate to ensure that there is no division within the party and that we are all supporting that candidate,” Mr Meriton stated, emphasising the importance of unity within the party.

Mr Meriton also stated that President Danny Faure, who has expressed an interest to stand for the next presidential elections, will also have to follow the same procedures.

“We believe in transparency, accountability and good governance and today, there are many conversation on corruption which is why we said, one of the critical and important points is the declaration of assets and loans,” he asserted.

The date by which congress will vote to elect the presidential candidate is yet to be announced.

Leader of the opposition speaks out on ANB luggage search incident | 13.02.2020